Setomaa, a Kingdom on the Edge

At the edge of worlds, straddling the European Union and the Russian Federation, orthodoxy and paganism, death and life, secular traditions and modernism, stands the young kingdom of Setomaa. It has been proclaimed in 1994 by the Seto, a Finno-Ugric group, to revitalize and affirm their identity, after the restoration of Estonian independence in 1991.

The Setomaa culture has been weakened over time by nearly half a century of Soviet control and the newly established (1991), not yet ratified (2019), Estonia-Russia border, which severs the region.

Today, the Seto King, also the god of fertility named Peko, is resting for eternity under the orthodox monastery of Petchory in the Russian side of the Setomaa. He communicates with its people through the dreams of his vice King or Queen, the Ülembsootska who is elected each year in August on the Estonian side of the Setomaa. 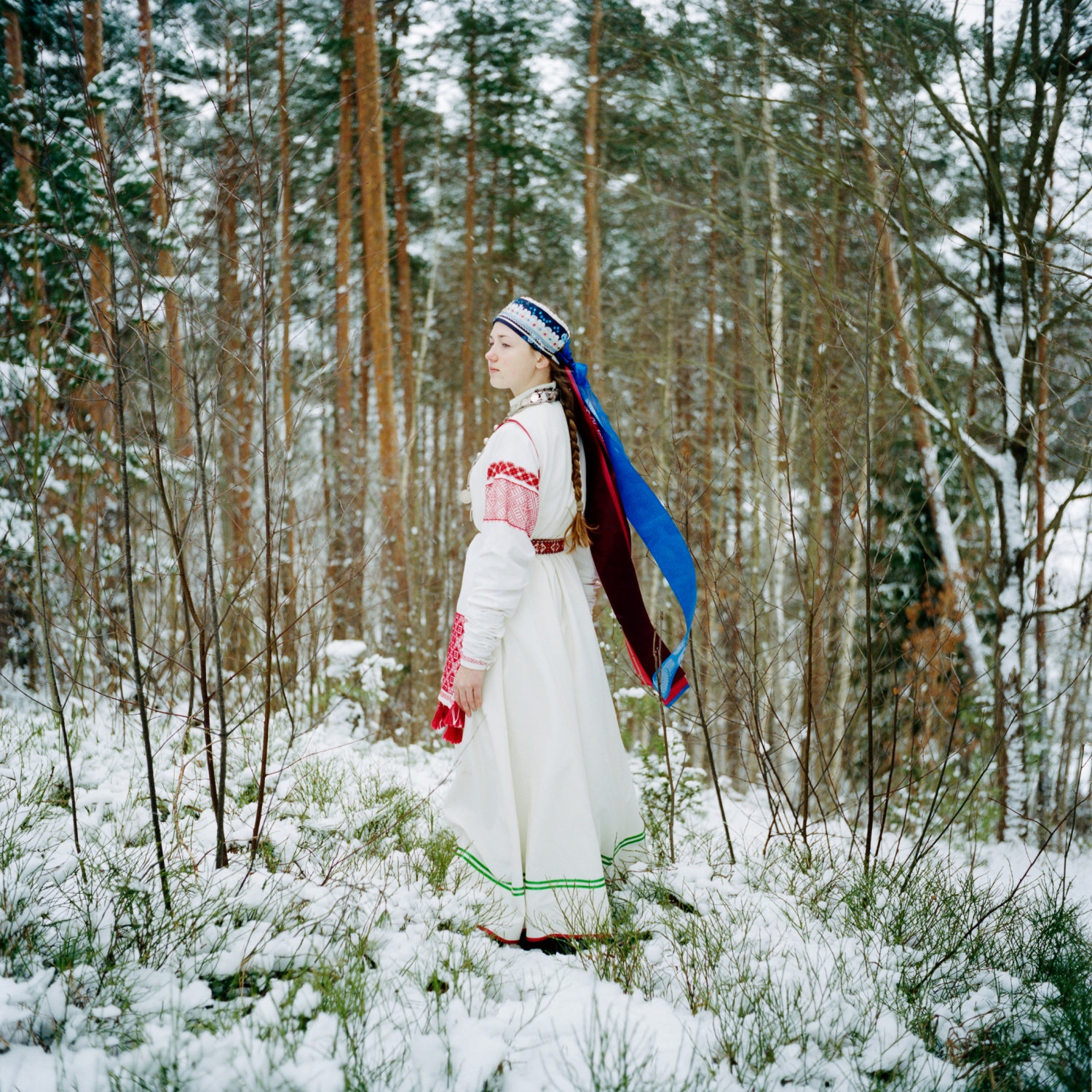 In Obinitsa, Estonia, a young Seto girl named Liisi Lõiv pauses wearing a traditional costume in her grandparents' garden. Seto women typically have both an old costume and a new one. This is an older one—white, with long, rolled sleeves. The clothing reveals other details too. A married woman must cover her hair, while an unmarried young woman or girl like Liisi will wear only a garland or a headscarf, leaving her long braid visible. Today Setos wear their traditional clothes only on special occasions. Liisi says she embroidered this costume herself. "I'm proud of being Seto,” she says. “It is where I come from, where I grew up." 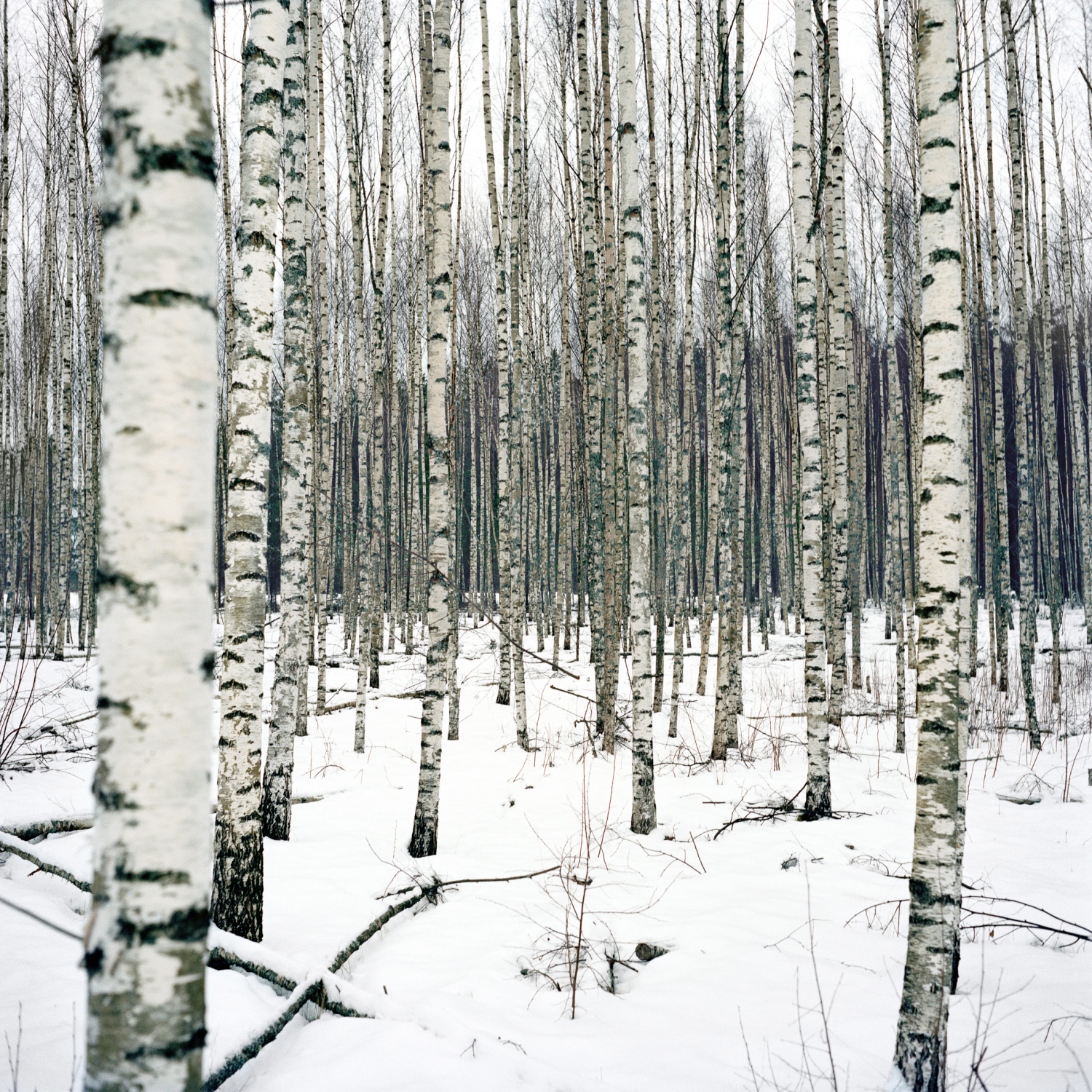 In wintertime when the landscape is covered in white, Setomaa intermingle shades of gray and white until the numerous birch forests. A tree from which a fermented drink called hapöndöt köomahl is extracted every spring. 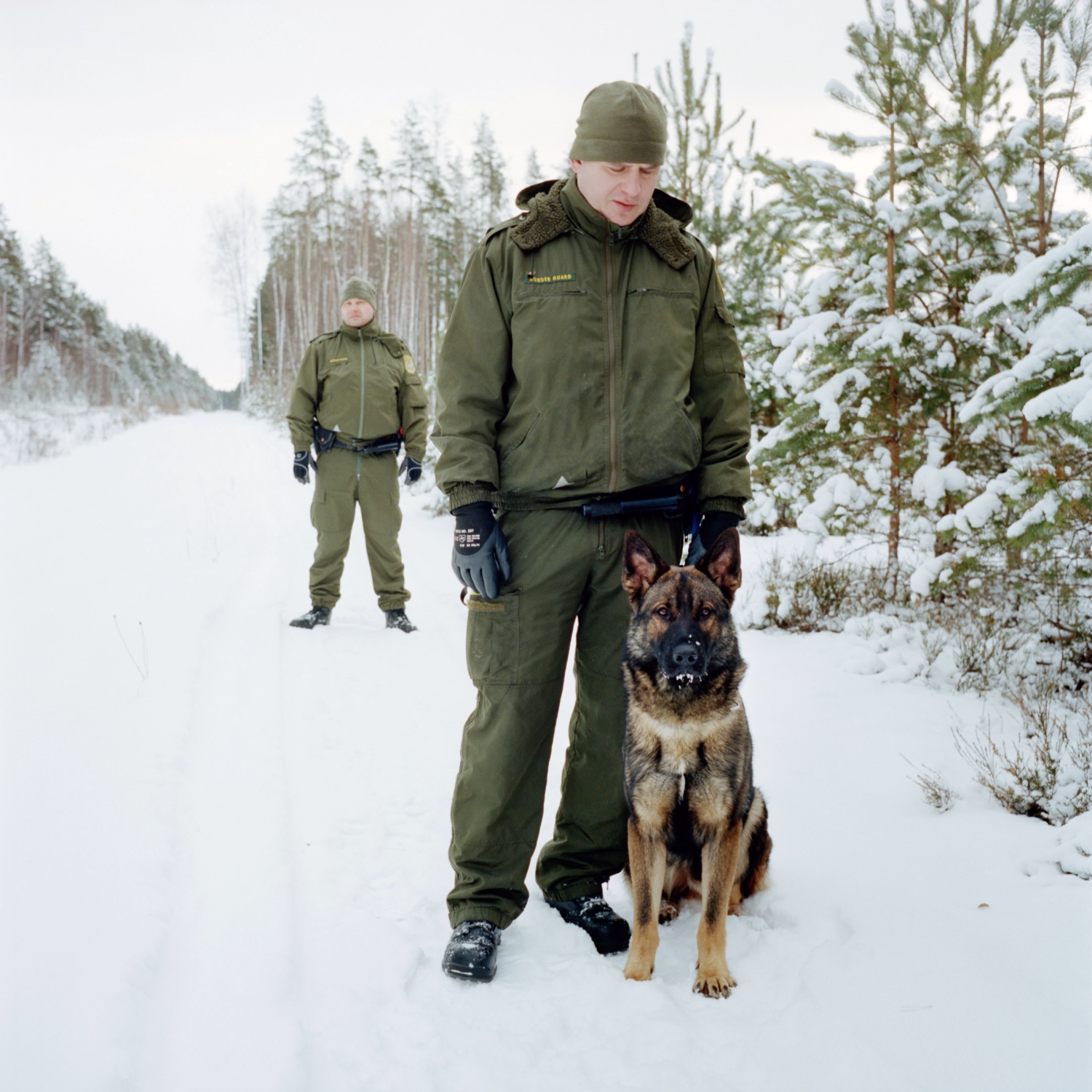 At the Estonian-Russian border, the Värska unit border guards walk 10 km along the border with a dog trained to detect any suspicious footsteps from an illegal trespassing. Before 1991, the whole Setoma was united, either under the USSR, Estonia or Russia. 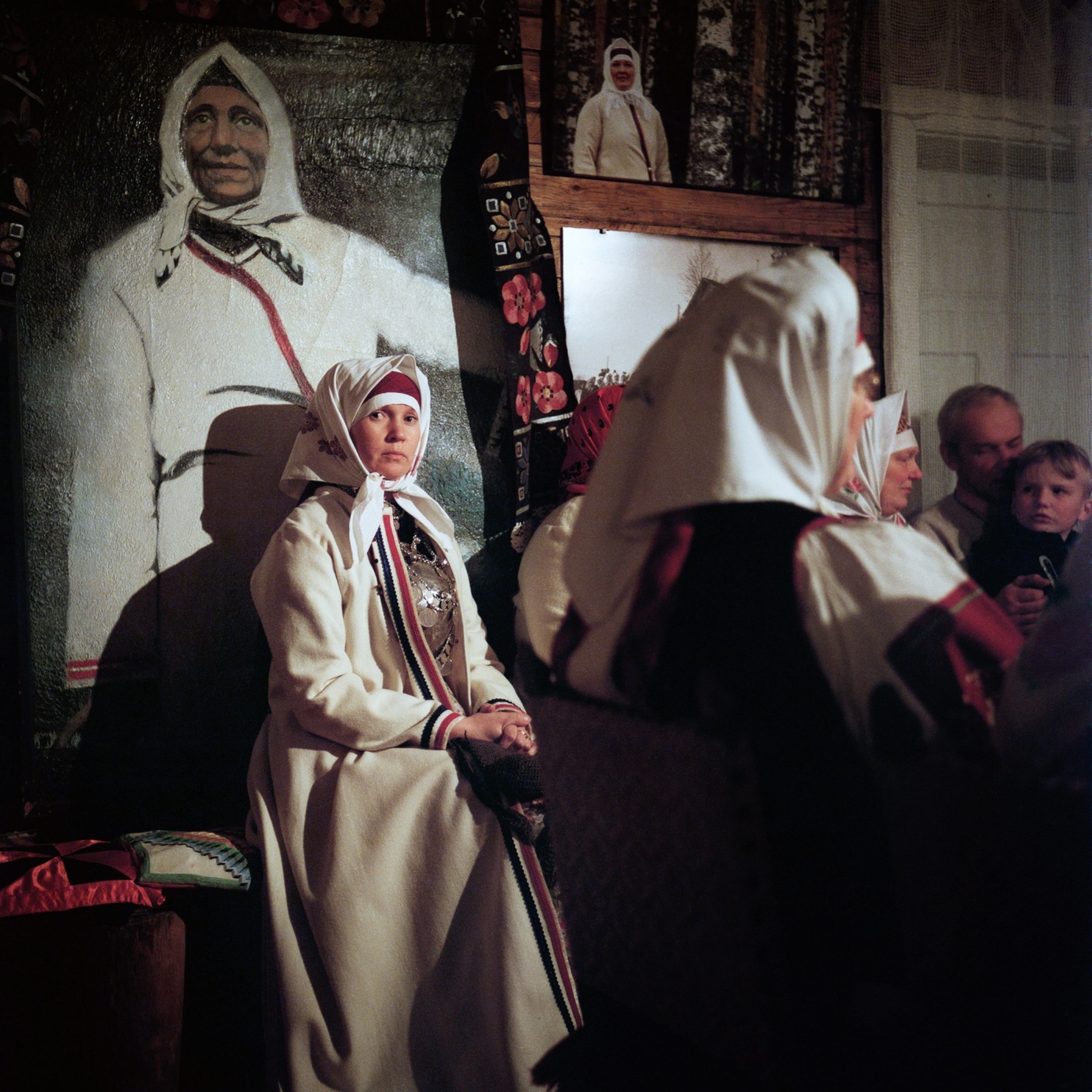 Marika Keerpalu, wearing a traditional costume at a small art gallery on the Estonian side of the border, welcomes a group of visitors from Mordovia, Russia. The visitors speak a language called Erzya that is similar to Seto. Wearing her hair fully covered signifies that Marika is married. Here, she sits below a painting of Hilana Taarka, a Seto woman from the turn of the 20th century famed for her rebellious singing. 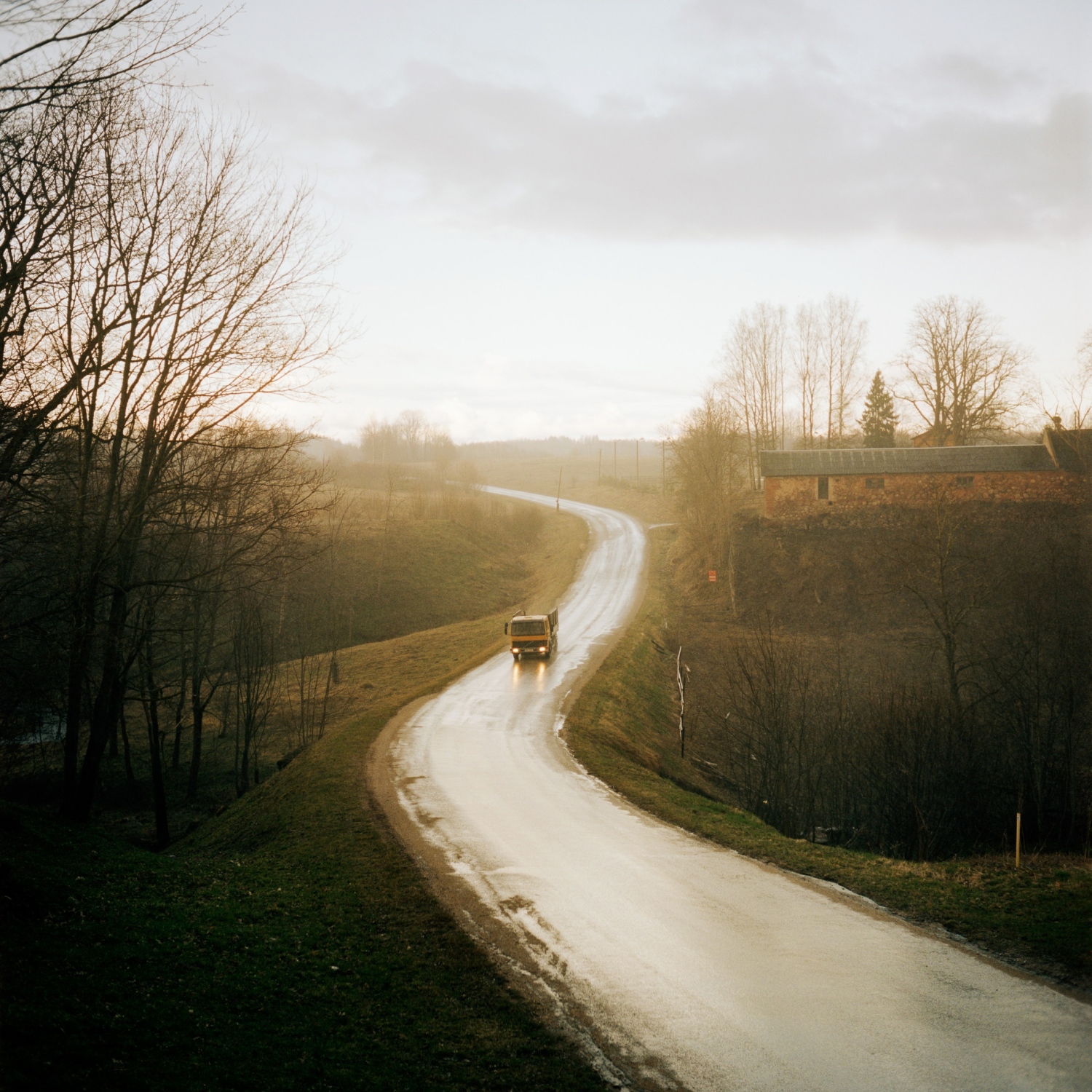 The former trade route which was bridging Riga (Latvia) to Pskov (Russia) runs today along the symbolic border between the rest of Estonia and the Estonian Setomaa.

This Seto family who picnics in the fields participates in a village party called kirmas. An opportunity to meet with different generations to discuss, play, dance and sing while drinking hansa, a local version of vodka. 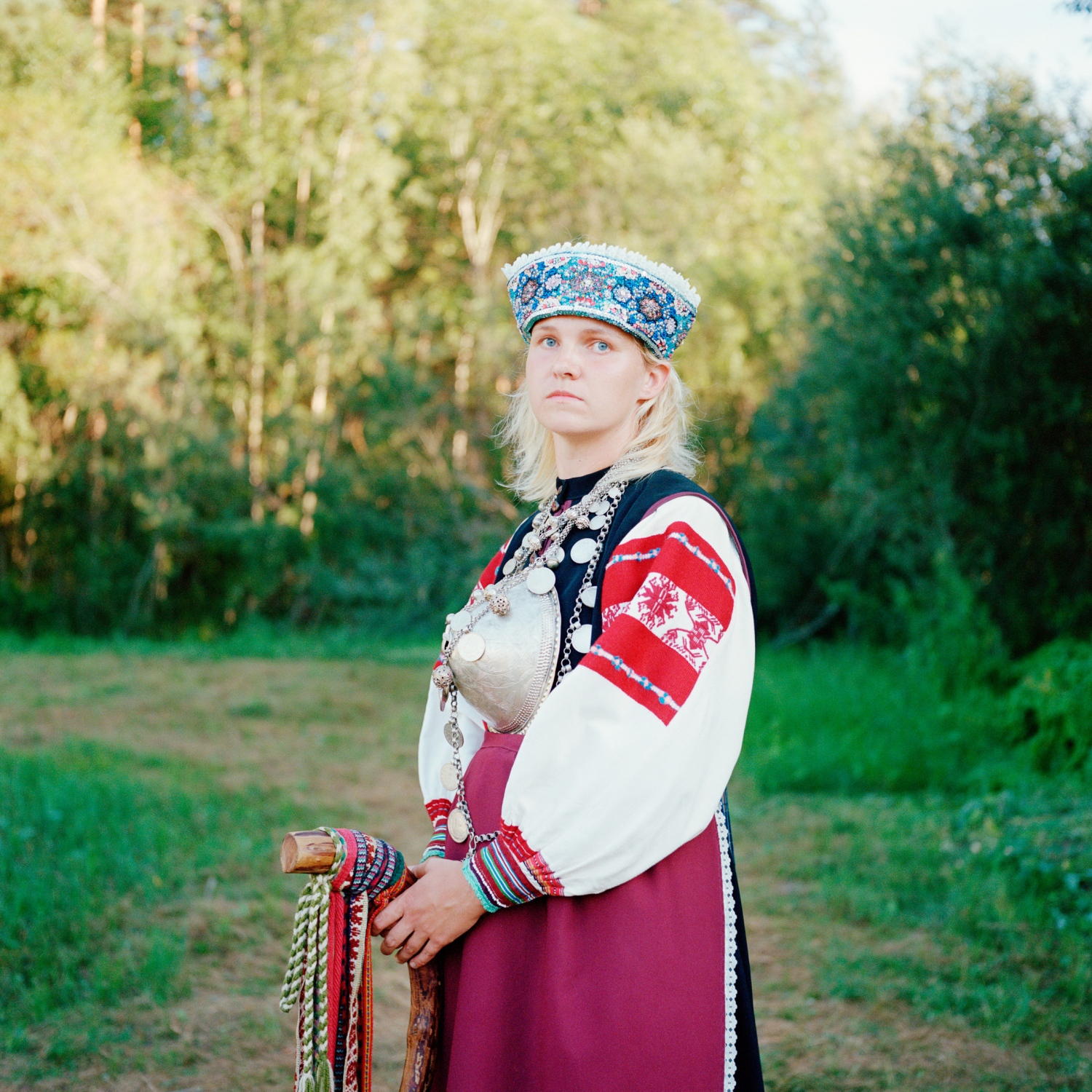 A vice-king or queen, elected each year, are believed to communicate with Peko through their dreams, and must pass messages to the Setos. It's been more than two decades since the division of Setomaa by the Russian-Estonian border prompted the Setos to declare Setomaa their kingdom and Peko their king. In 2014, it was the turn of Annela Laaneots, 36, to be elected Vice-Queen of Setomaa (Ülembsootska in Seto language). For a year, she embodied the vitality of a people proud of their culture. 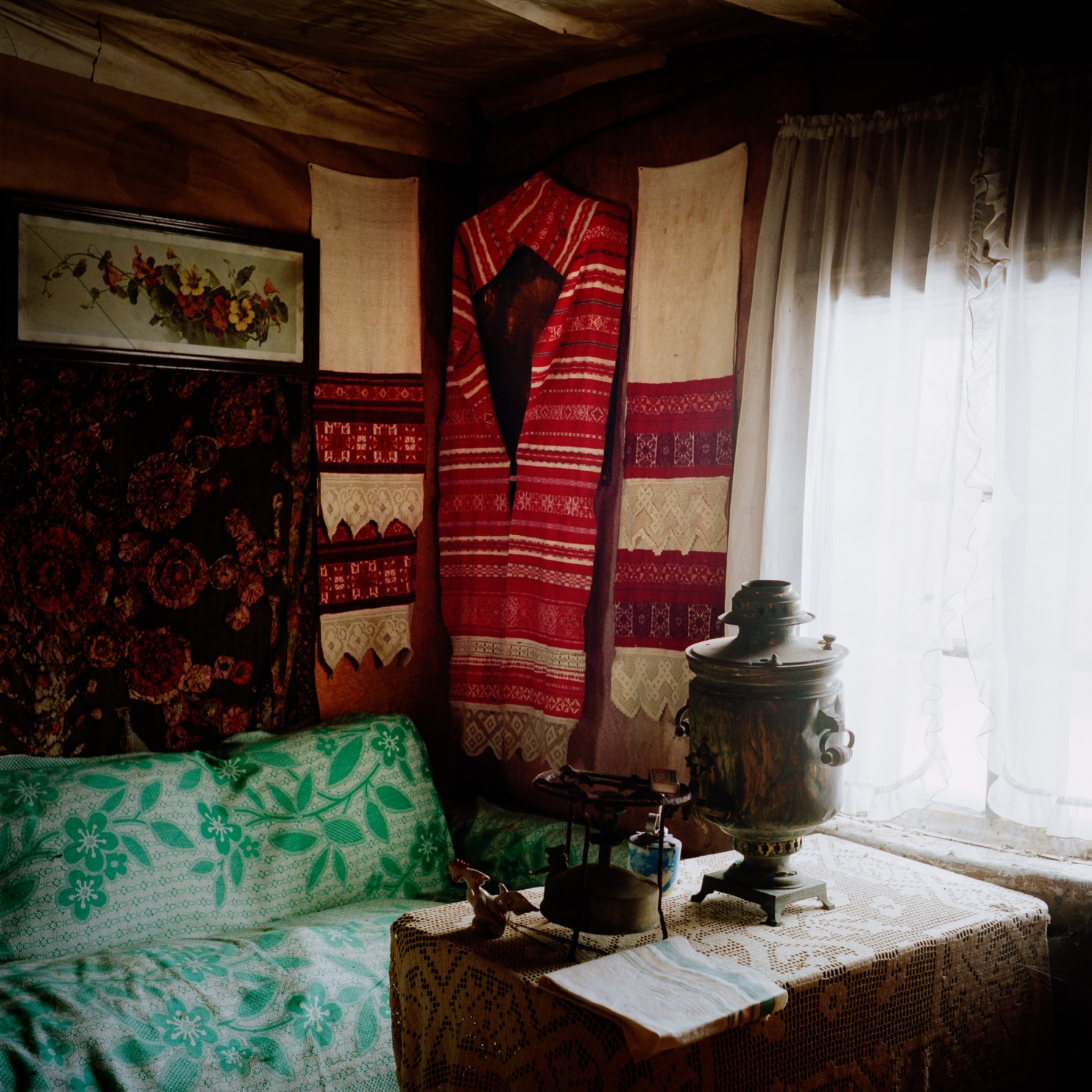 In each Seto house, as here in this old farmhouse, a prayer area is represented by an icon embellished with an embroidered fabric. 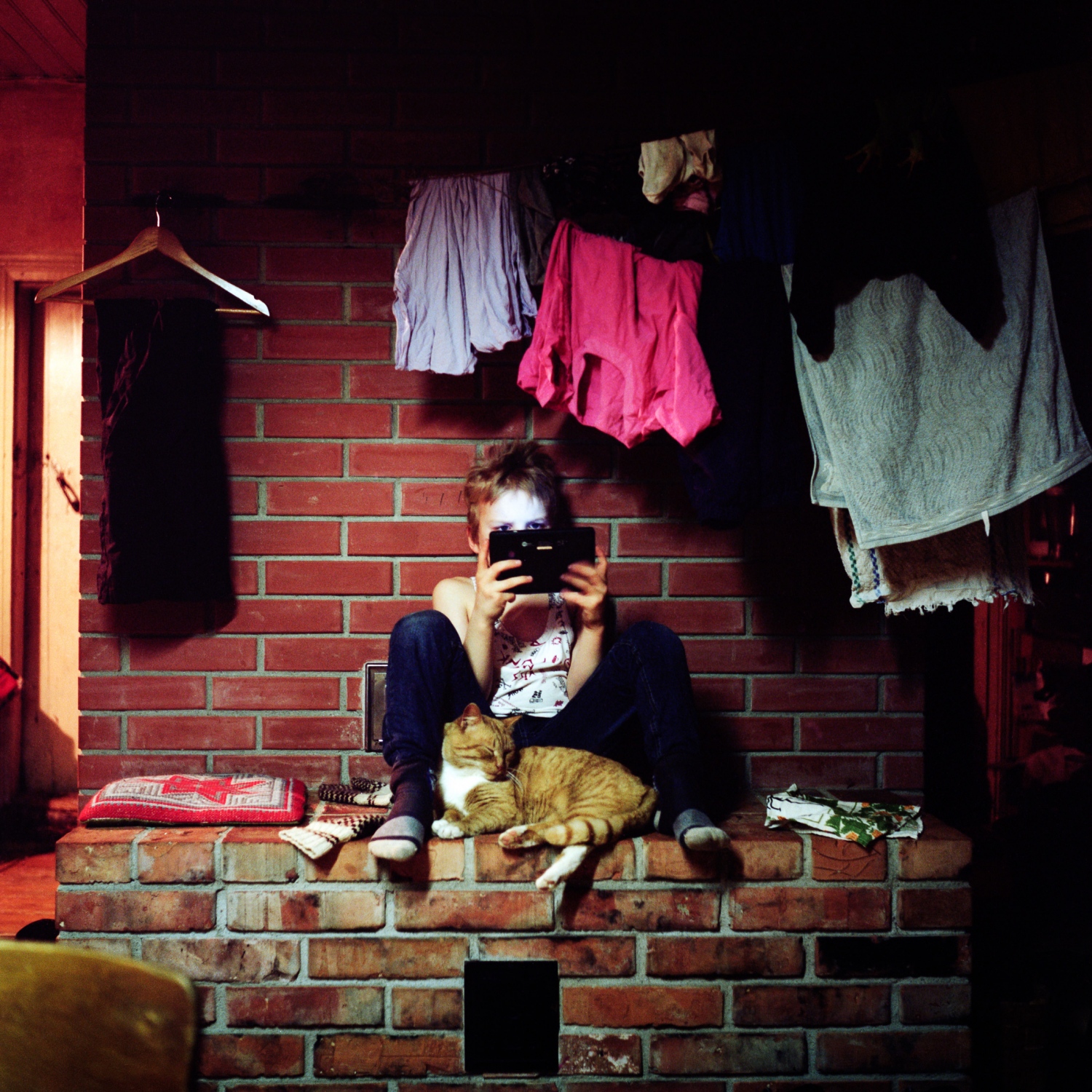 Truvar, son of Evar Riitsaar (A former Ülembsootska, vice-king in seto language) and Ülle Kauksi (a local poet) is playing video games on the main heating place of his home. Traditionally all seto house were heated by this central fire place also used as a hooven. Some houses in setomaa still have them today. 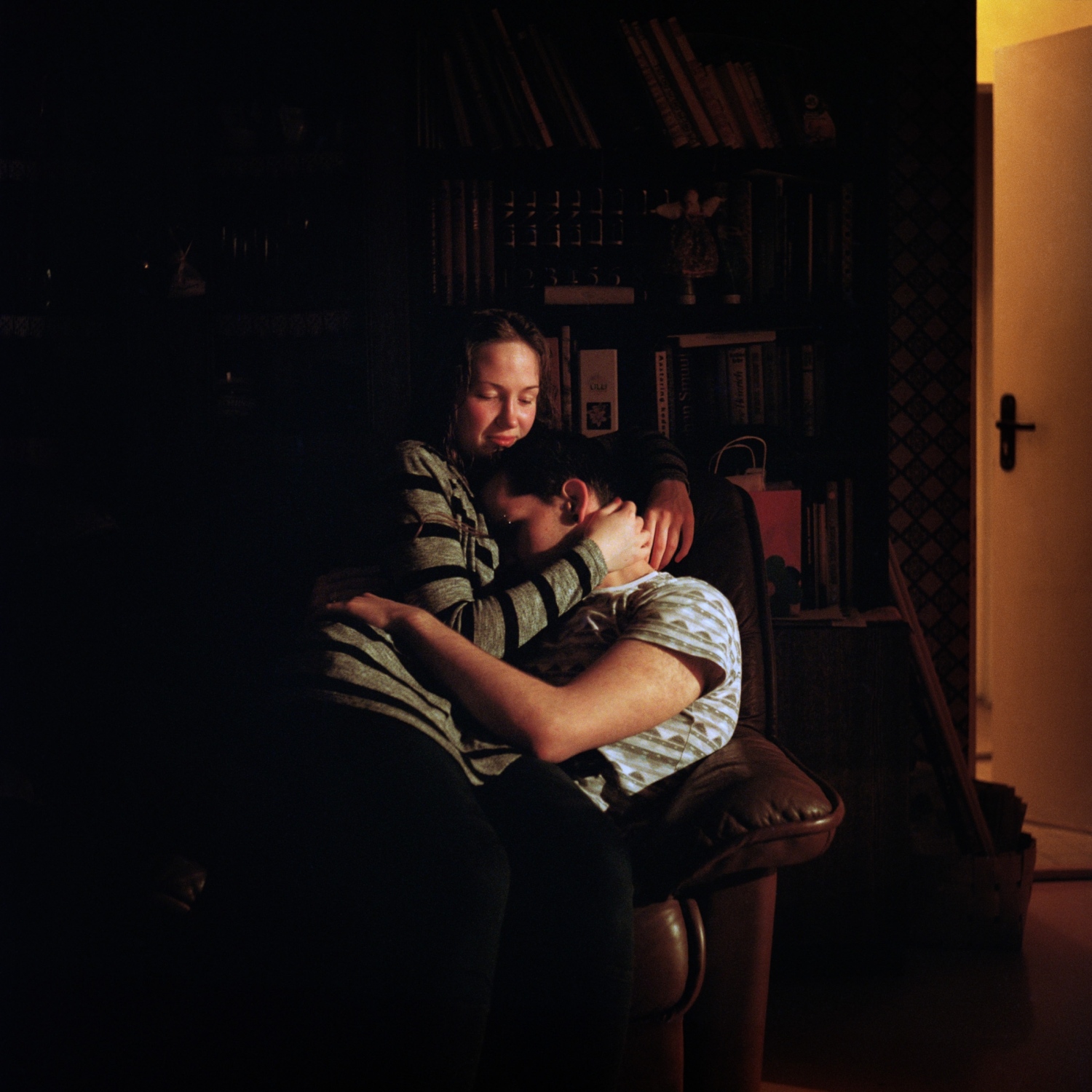 Liisi, the niece of Evar Riitsaar a former Ülembsootska (vice king) and her boyfriend Elari. Elari is not from a Seto origins. For a long time, the Seto were not educated and most of them illiterated. Back then, the Estonians disaproved mixed couples. 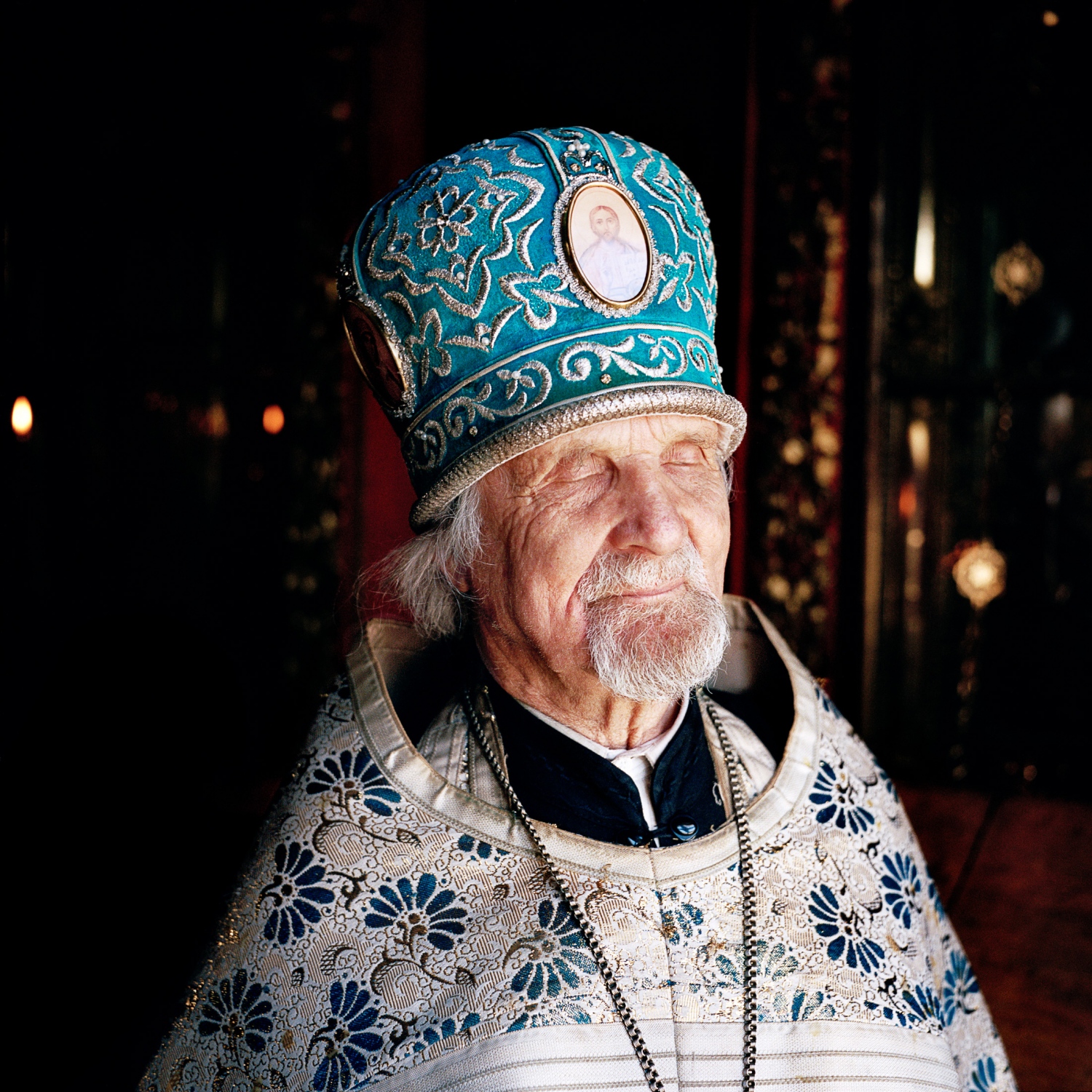 Father Jevgeni, an 85-year-old priest of the "half-believers," has been officiating at the Petseri Varvara Church—now on the Russian side of the border—for the past 40 years. But he’s been a priest for much longer. "It will be 70 years now that I officiate,” he says. “I started 40 years ago in Varvara Church because I was the only one who could do it in Estonian. Back then half of the church was Seto, and the choir sang in Estonian—the prayers were said in Estonian. But nowadays there is no point to officiate in Estonian anymore." Few Estonian speaking Setos are now found on the Russian side of the border. 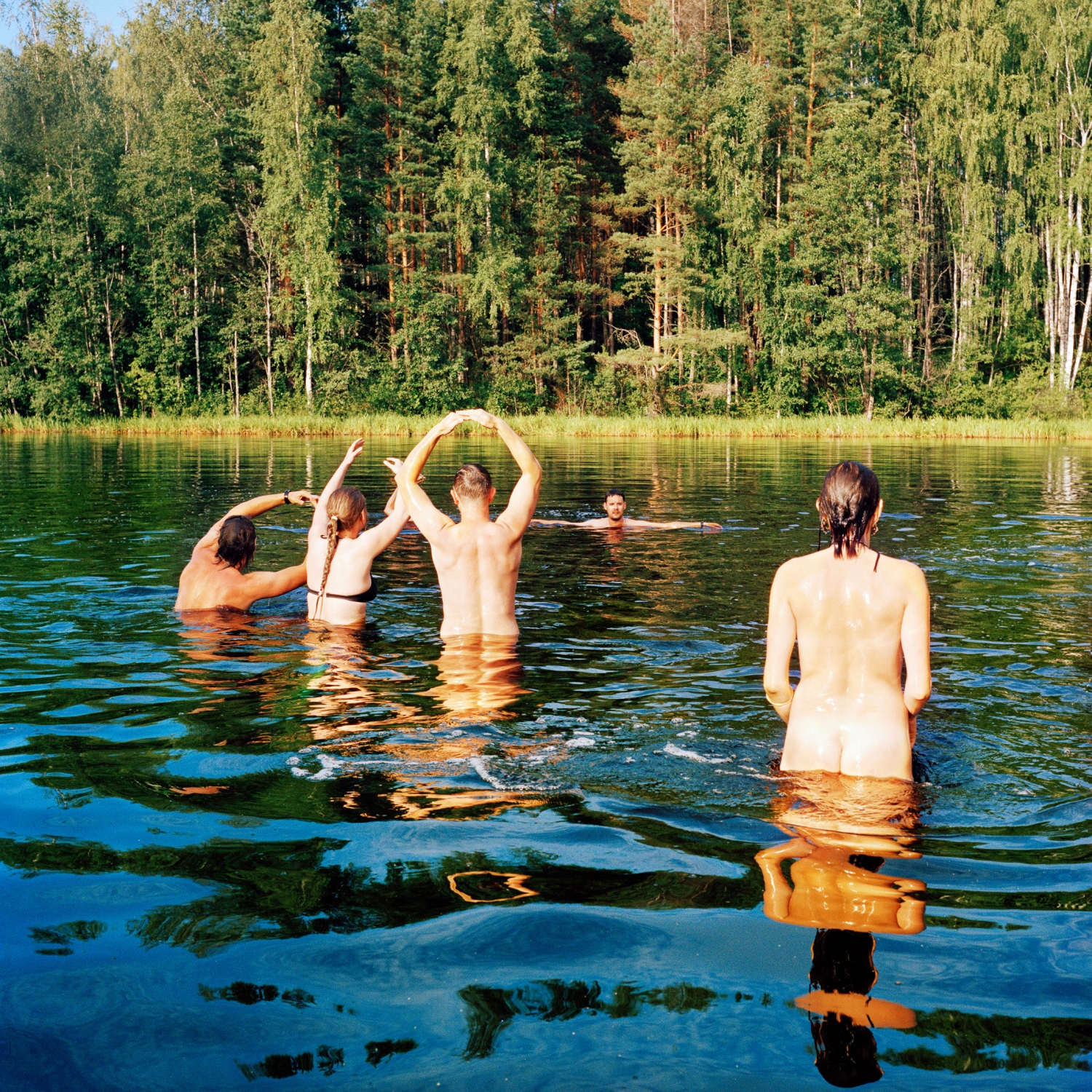 Near Saatse, Estonia, the Russian-Estonian border runs through the middle of this lake, where bathers play a ball game and frolic. 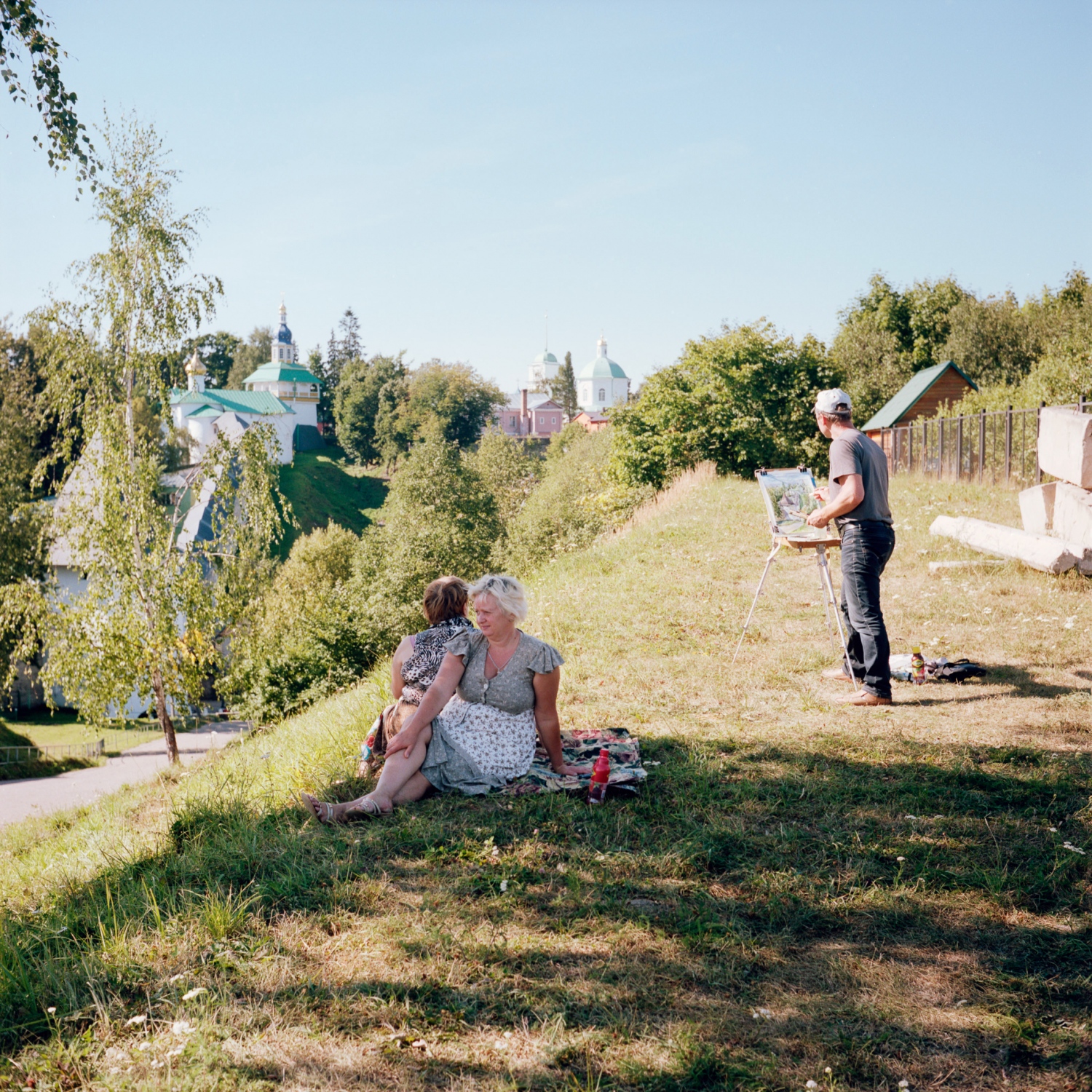 On a warm summer day, an artist paints the Russian Orthodox Pechory monastery, which Setos believe is the resting place of Peko. 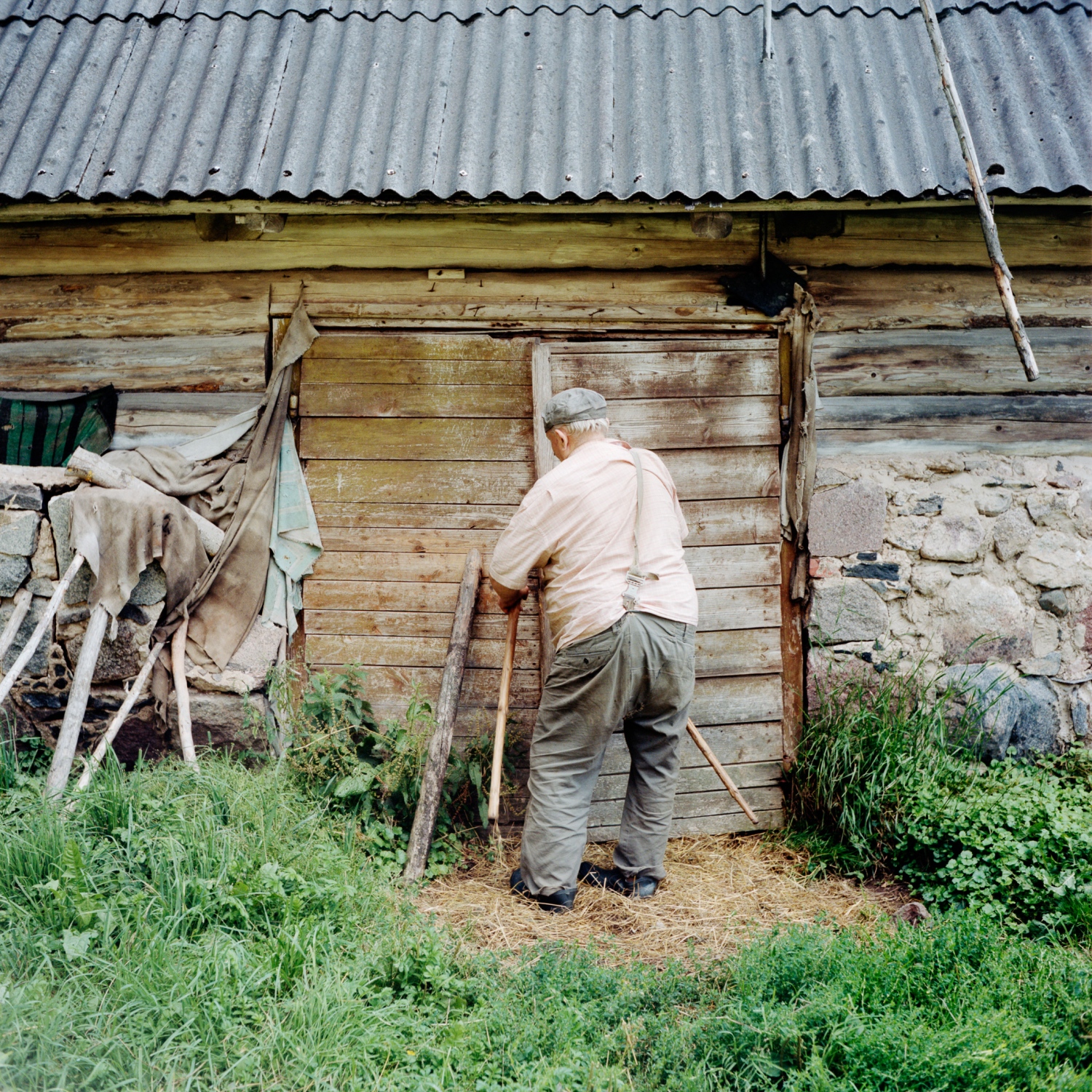 Vinski is a small Estonian village right on the Russian-Estonian border running through the Setomaa. Today two families and an old man live in Vinski. Before 1991 the village hosted 14 families. 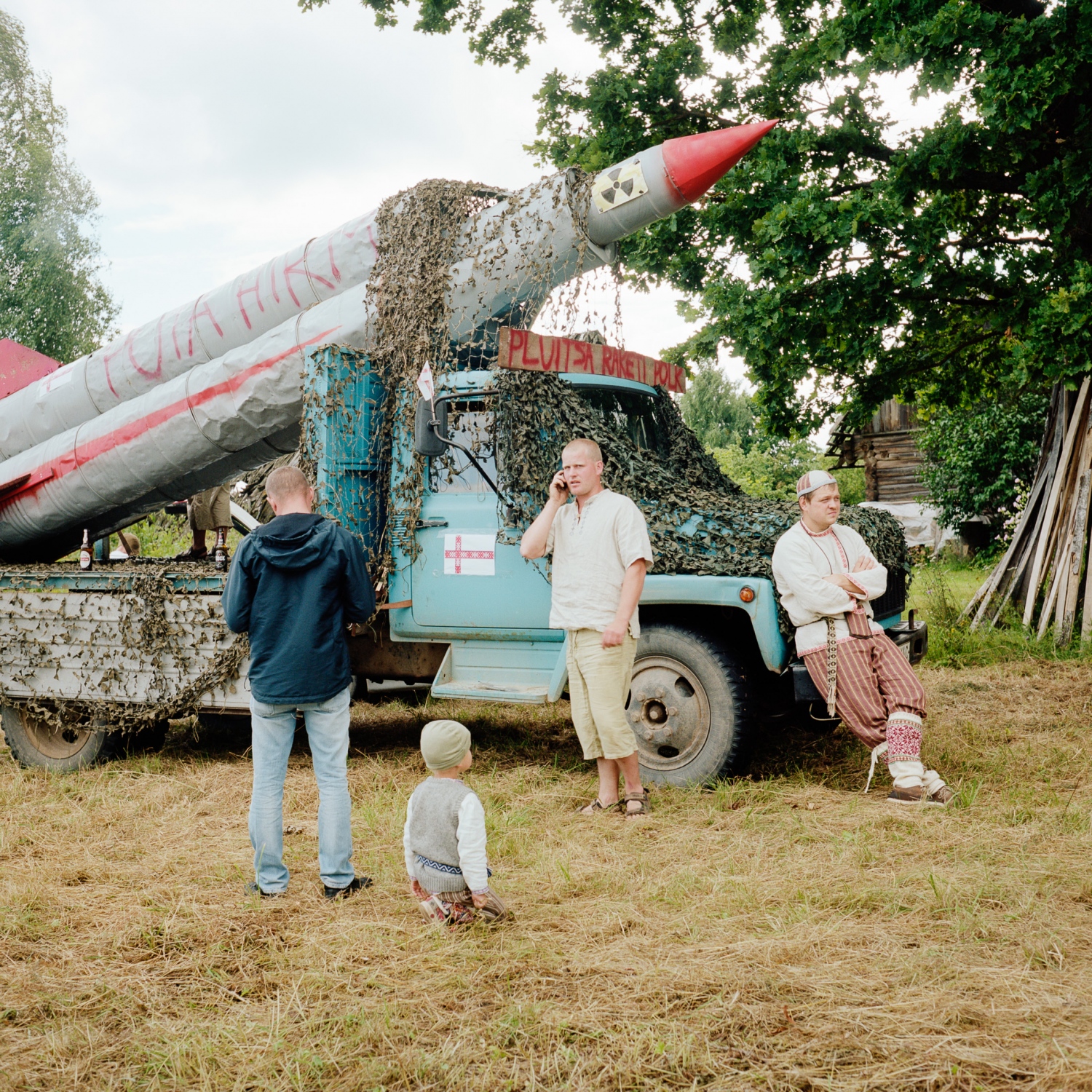 Endowed with a strong sense of self-deprecation, the Setos organize a zany military parade in the wake of the election of their Ülembsootska (vice king or queen in Seto language). Operetta uniforms and dummy arsenal - which this missile made of old barrels - are output for a grand parade. 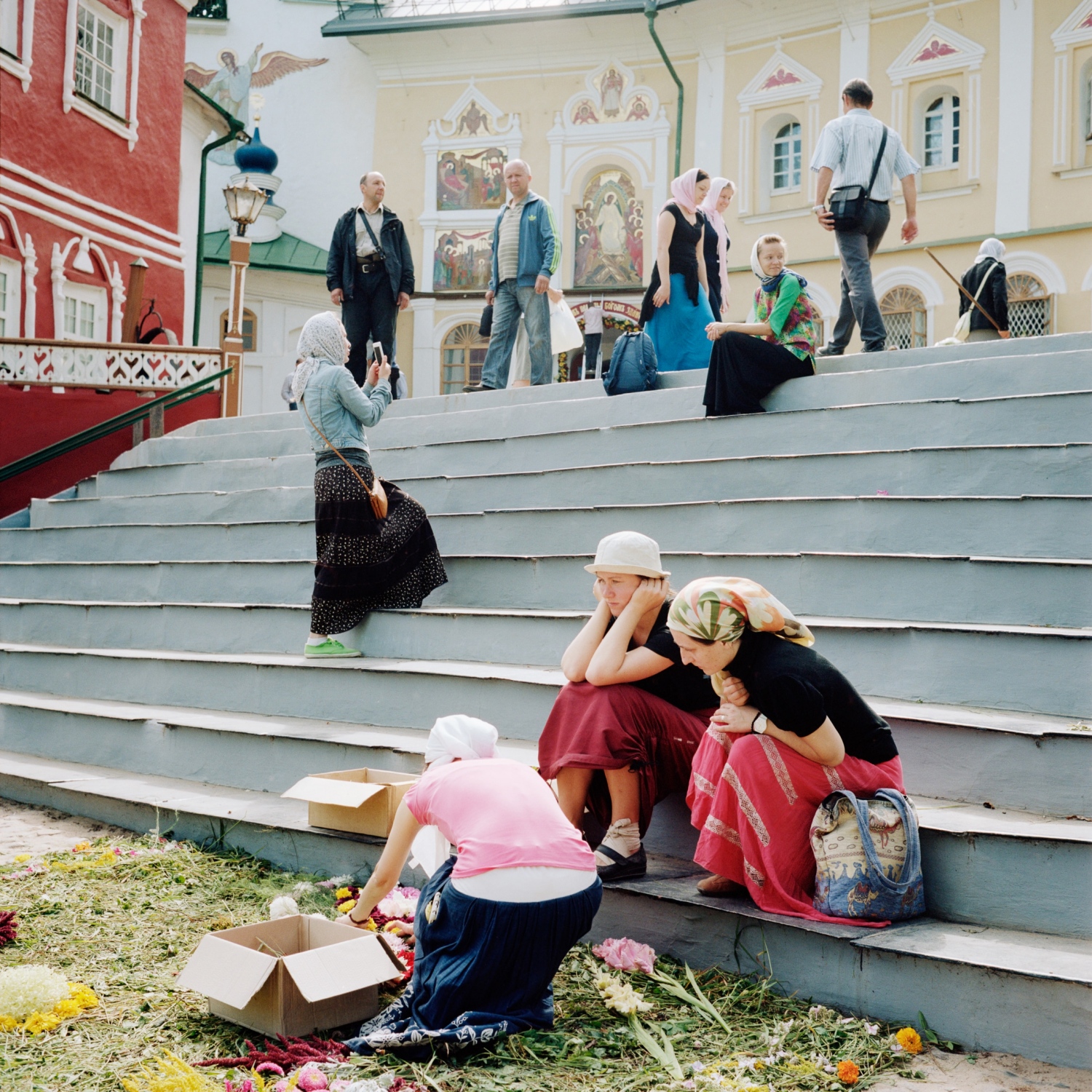 At the Pechory Monastery, the in Russian side of the Setomaa, volunteers are preparing a carpet of flower over which the miracle-working icon of the dormition will be carried out from the Dormition Church. A group that includes Setos from both sides of the border as well as Russian Orthodox believers will attend the celebration. 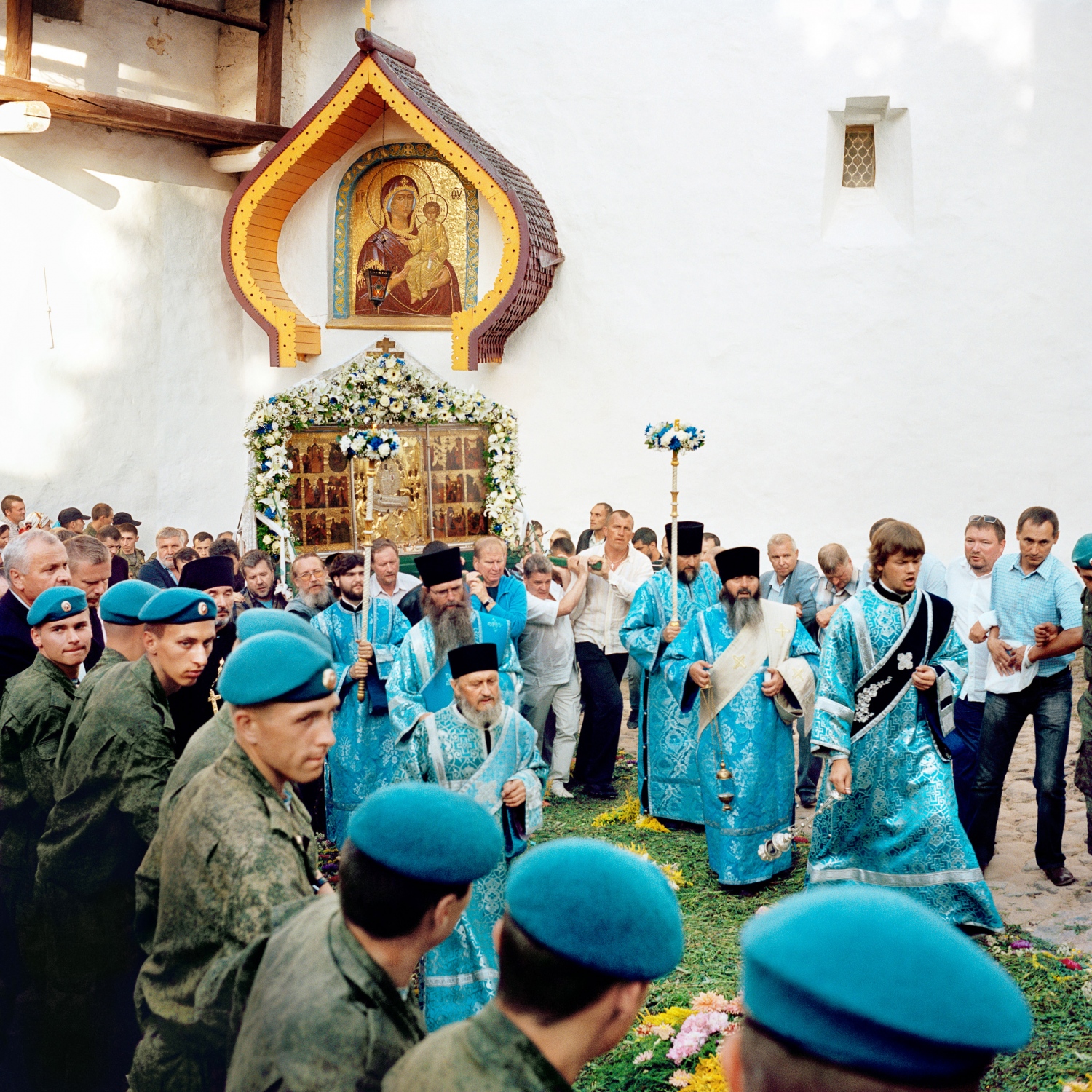 An icon is carried around the Pechory Monastery on the day of the Dormition of the Mother of God. Both civilians and members of the Russian Army gather to help protect the icon as it’s viewed by the faithful—a group that includes Setos from both sides of the border as well as Russian Orthodox believers. 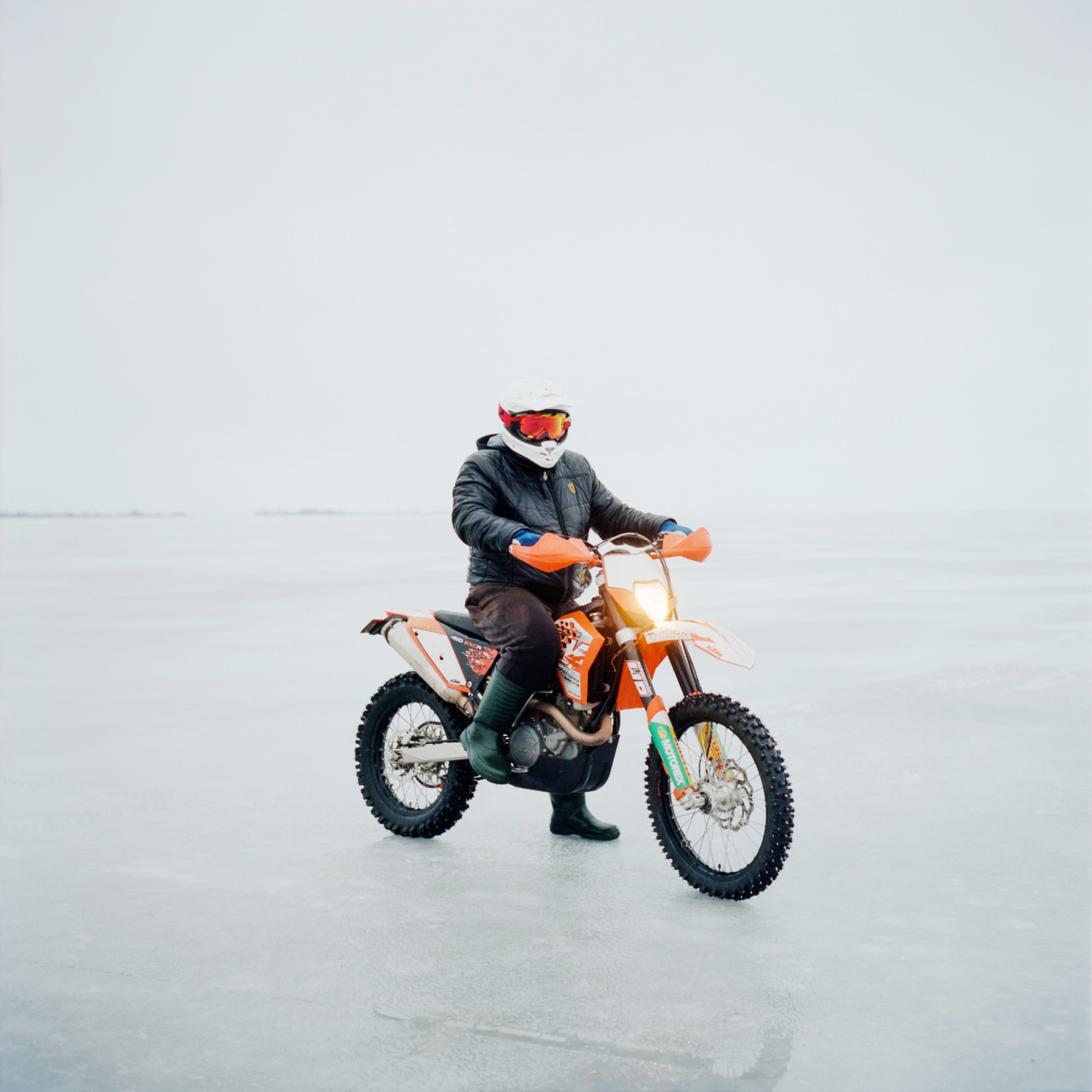 The Lämmijärv lake, a natural border between Estonia and Russia. The border runs through the middle of this lake, where this biker plays on the Estonian side of the border. 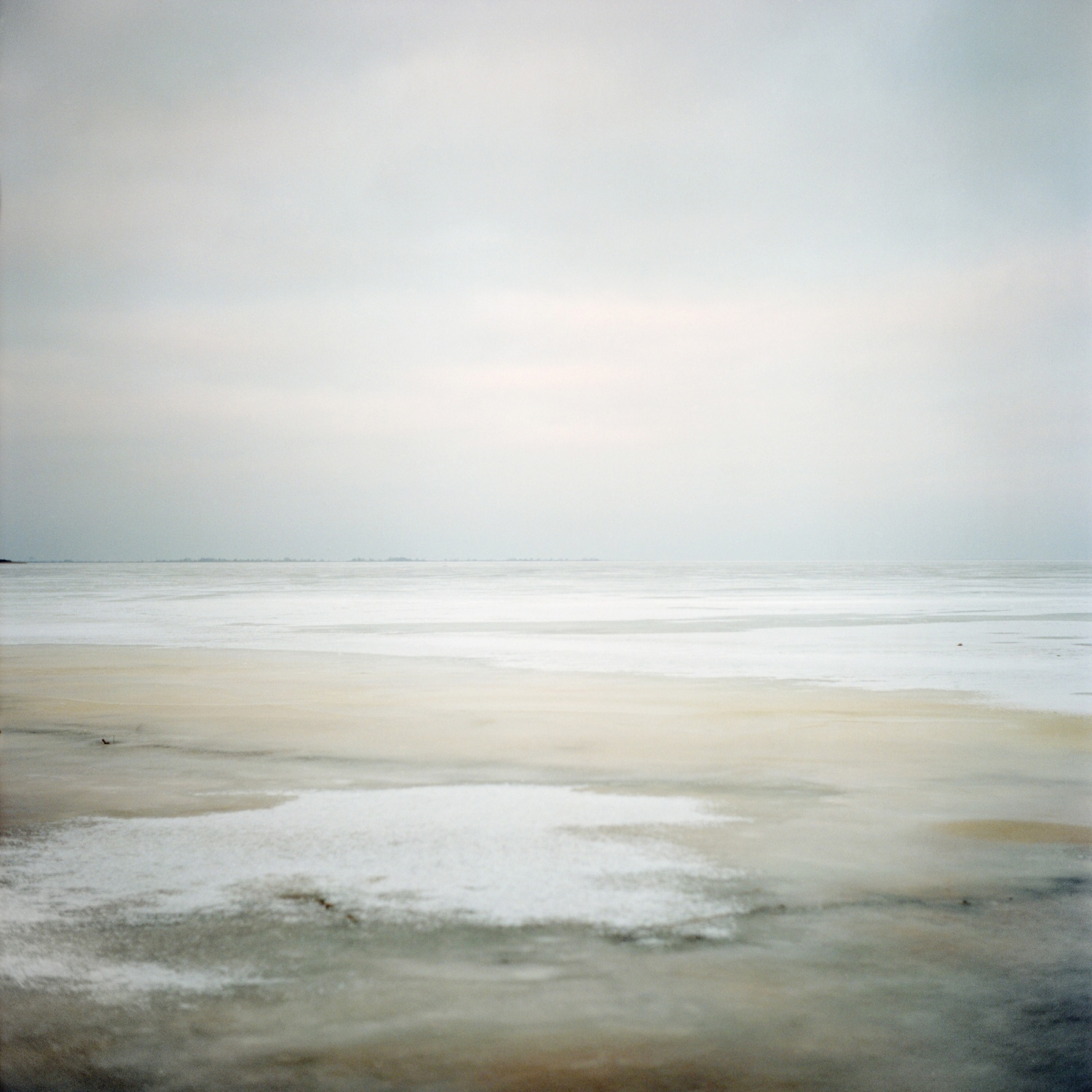 The Lämmijärv lake, a natural border between Estonia and Russia. 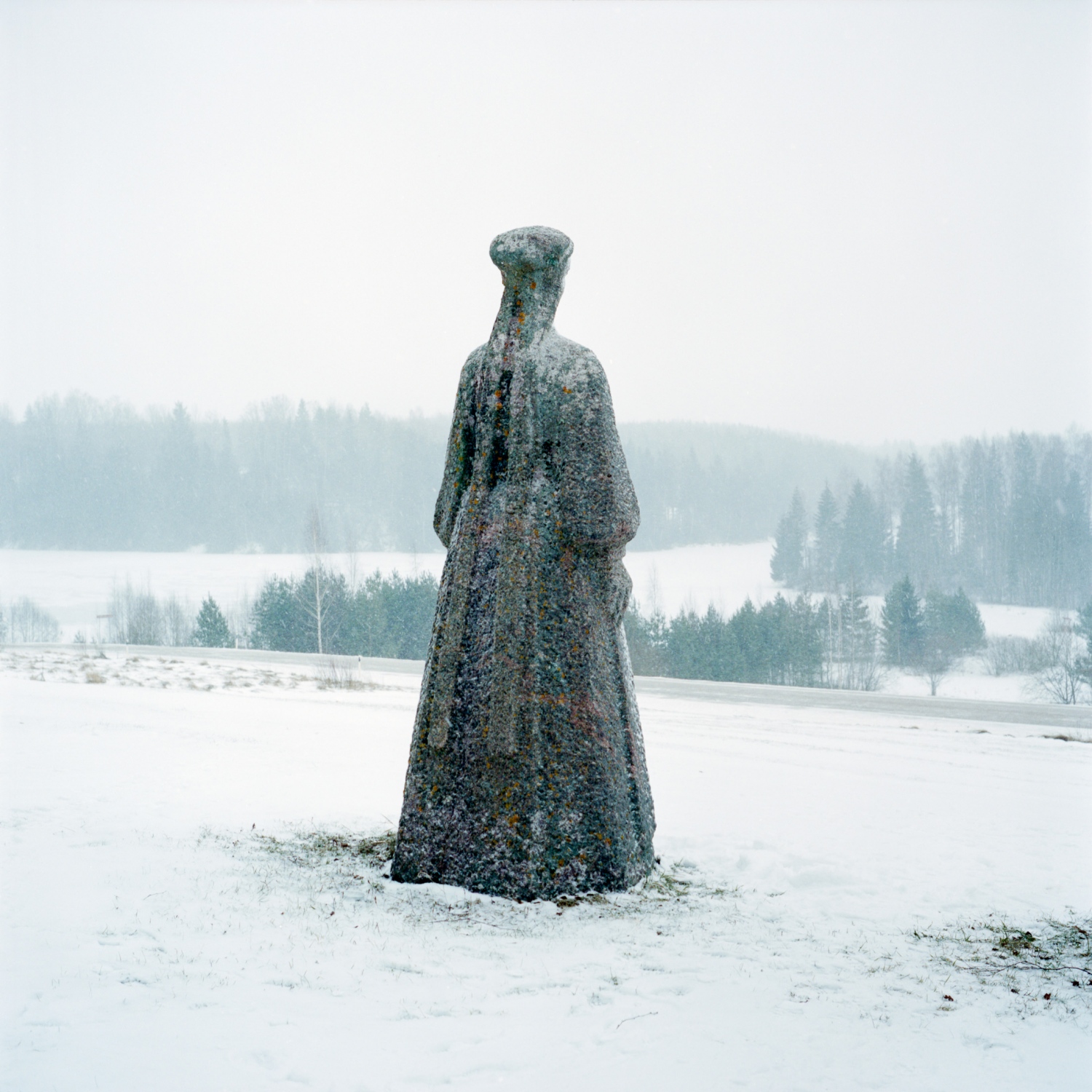 The statue of the Seto lauluima, or Seto singing mother, was created by the sculptor Elmar Rebane and erected in Obinitsa in 1995. A lauluima is a lead singer of a Seto leelo choir, which performs traditional polyphonic songs considered an intangible cultural heritage by UNESCO. This statue is said to represent all the singing mothers, but specifically honors three famous Seto singers: Hilana Taarka, Miko Ode, and Irö Matrrina.