Kihnu, the Isle off the Time

Populated by a few hundred people, Kihnu is a small island off the coast of Estonia. In a country marked by successive dominations (Danish, Swedish, German, Russian), the transmission of a local cultural heritage has a strong symbolic dimension. Its relative remoteness and small size preserved it during the Soviet occupation. Although the regime prohibited regional cultural practices such as speaking the Kihnu language, the island was less subject to the regime’s authoritarian control than on the mainland. Following the end of the Soviet period, the inhabitants of Kihnu developed a singular island identity whose women are known to be the guardians. In fact, it is the women who are first noticed in this 500-strong fishing community, to the point that some people regularly invent the status of «matriarchal community». Since 2003, the cultural space of Kihnu has been inscribed on UNESCO’s representative list of intangible cultural heritage.
How to talk, how to dress, how to think and play music... the cultural heritage of the island, much more than a practice, is a real way of life. The most visible element is certainly the woven wool skirt called koÌˆrt, striped with the colours of the highlights of life.

In the other regions of Estonia, traditional clothes are donned only during special occasions and events. On the island of Kihnu, skirts are worn on a daily bases in the same way a pair of jeans can be: in the field, at church, in shops, at the pub and at school. But unlike jeans, each skirt is different; it changes over the years and depending on the occasion. The skirts worn by young girls for example tend to be of a brighter red. And as the years go by, various life events would impact the garment’s look. During periods of mourning, skirts would go from red to black, before transiting to blue and then back to red. The skirts encapsulate a lifetime of memories by harbouring the traces of all these events that have punctuated the wearers’ lives. Therefore older women may wear darker dress than the young ladies.

Following the fall of the Soviet Union in 1991 and the restoration of its independence, Estonia is positioning itself as a resolutely modern country - one of the most connected to the internet, politically attached to the European Union. In response to a rapid westernization of lifestyles, the inhabitants of Kihnu strove to set up institutions to organize the transmission of their identity. This is evident in weaving lessons or music teaching in the only school on the island. Most of the teachings are in Kihnu language. Like any living language, it evolves and a Kihnu-Estonian lexicon regularly reports new words that appear.
While insularity has helped to protect the specificity of the community, it does not encourage young people to stay. Since the 1990s, the island gradually depopulated and traditional culture began to decline as its inhabitant migrate to the continent to study or work. Today Kihnu lives largely of tourism products rather than a fishing industry on the wane. To make one’s life on the island is a militant act, as island life is difficult, especially during the quite wintertimes.
-
Story lead between 2013 and 2019
printed in the Japanse quarterly Transit, 2020
printed online in the Washington Post, 2019
exhibited at the Musée d'Orsay, Paris, 2018
printed in the French weekly Pèlerin, 2018
printed as a book entitled "Au large du temps", Imogène editions, 2018 get your copy here
exhibited at the Musée Albert Kahn, Boulogne-Billancourt, France, 2016
printed in the French revue PORTRAIT #2, 2014 get your copy here 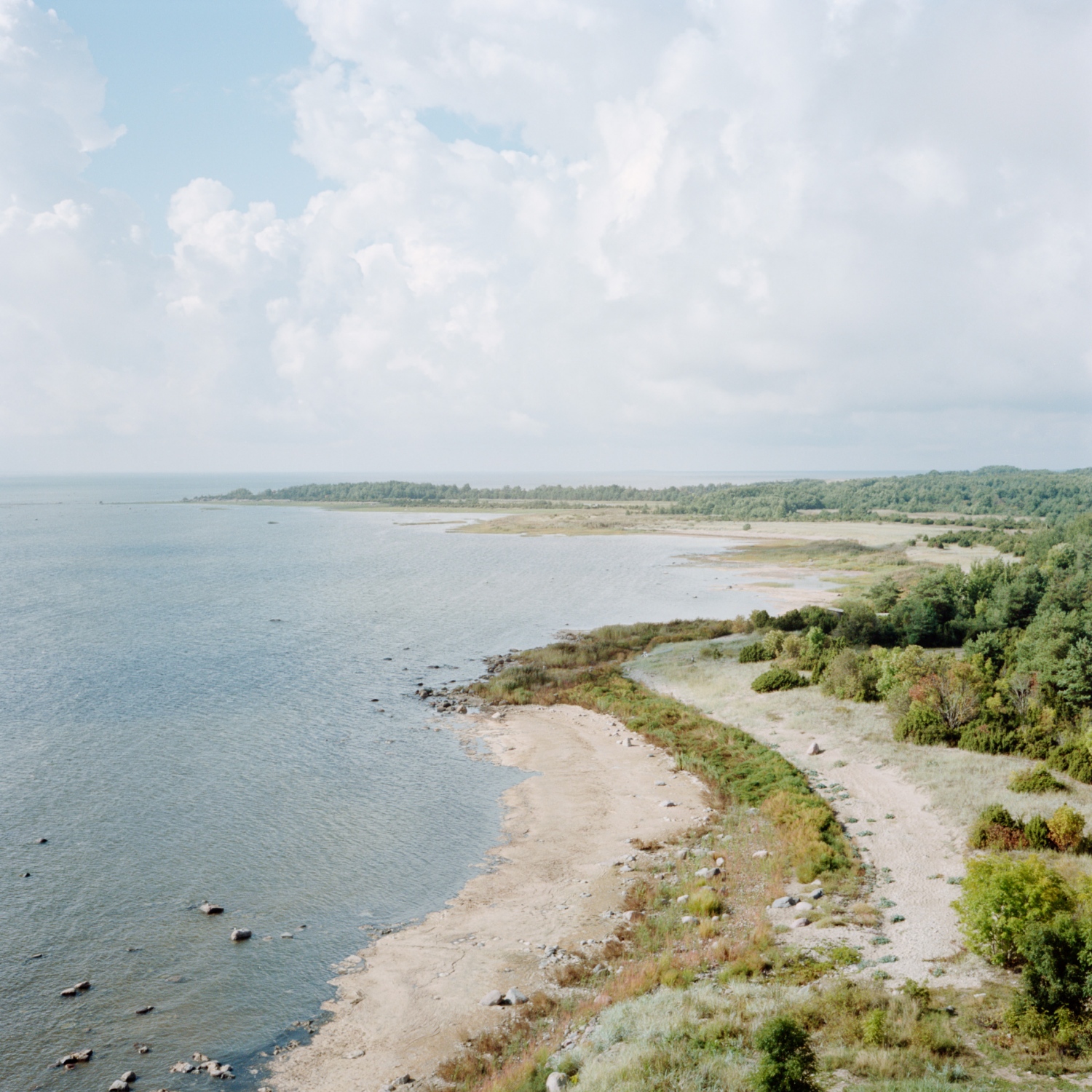 Although the island only has 510 inhabitants, during the summer the population can increase significantly: along with tourists, those that chose a more comfortable life on the mainland return to make the most of the island. 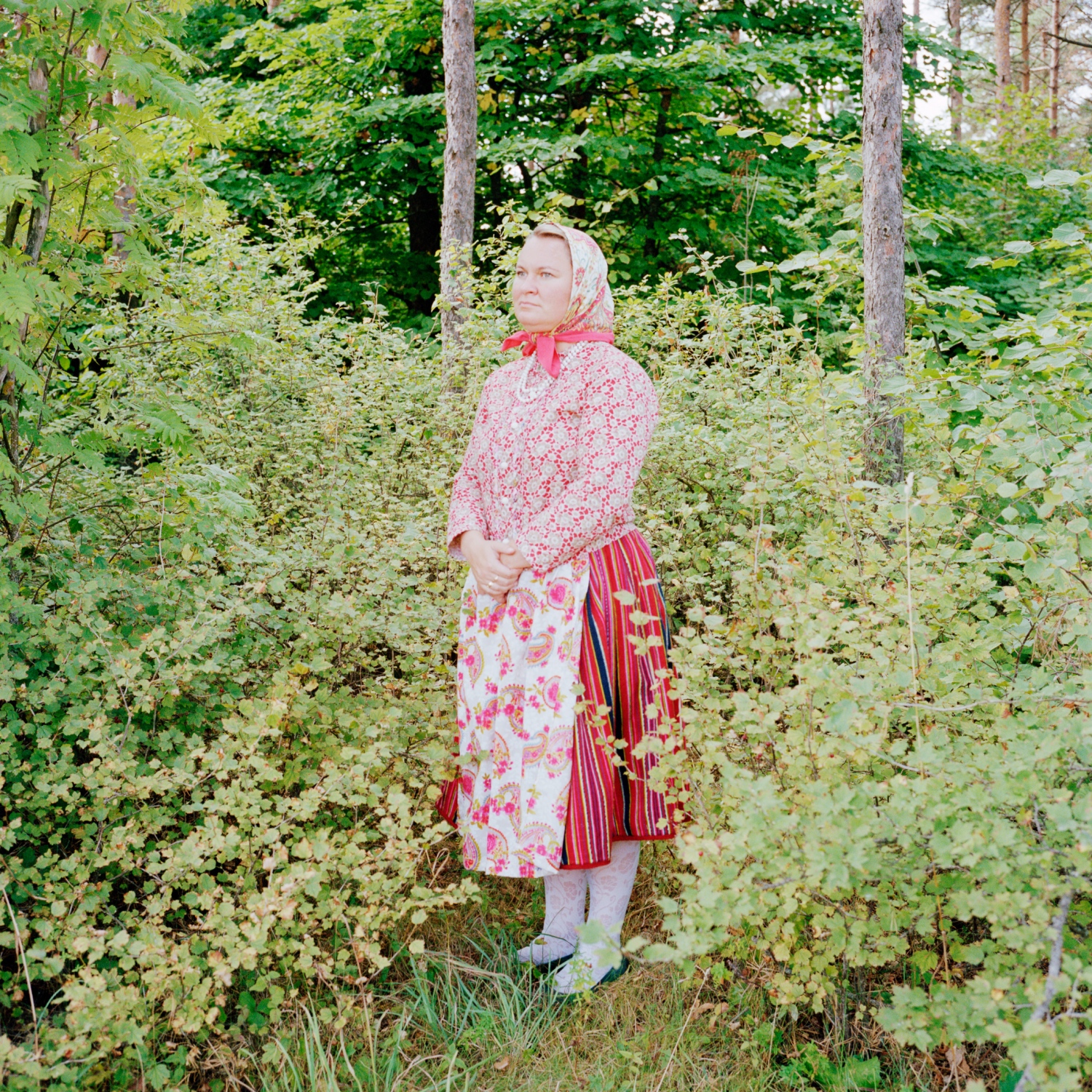 Mare Mätas, responsible for the Kihnu cultural space. “what is different on Kihnu? The way we speak, the way we dress, the way we think, make music...life on the island is structured around a set of rules that are only known by members of the community” - Mare Mätas, as told to Katrina Kalda. 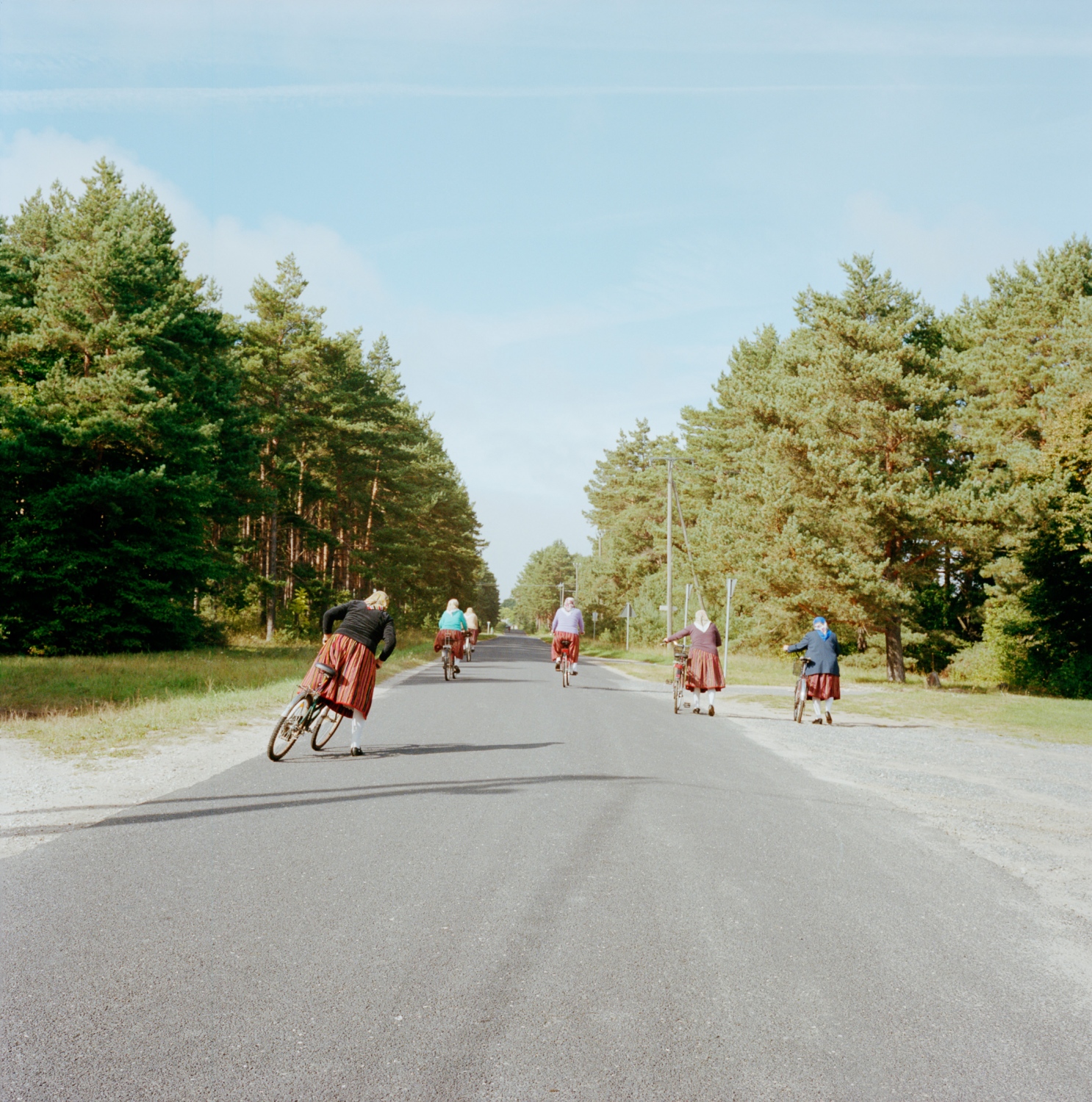 Although cars and motorcycles do circulate across the island’s 16 km2, cycling is a much more common method of getting around. Here, women head home after the monthly orthodox mass. 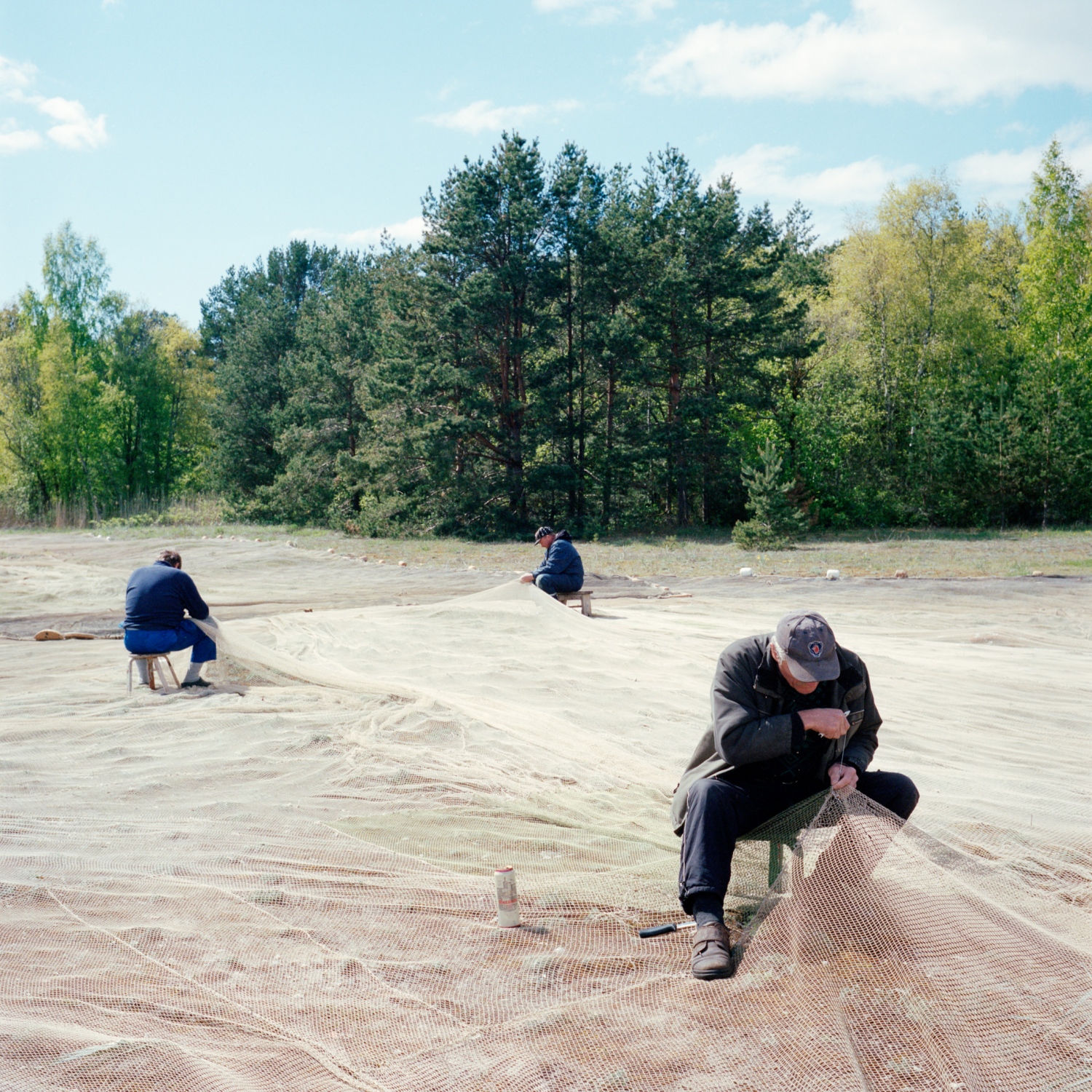 In April and May, the Baltic herring is reaching the Kihnu waters. Haido, Margus and Edward are fixing their net after that the Baltic herring quota has been fished. In the past, the men were mostly at sea and were the one to bring innovations on the island while the women more conservative were staying at home and taking care of the isle. 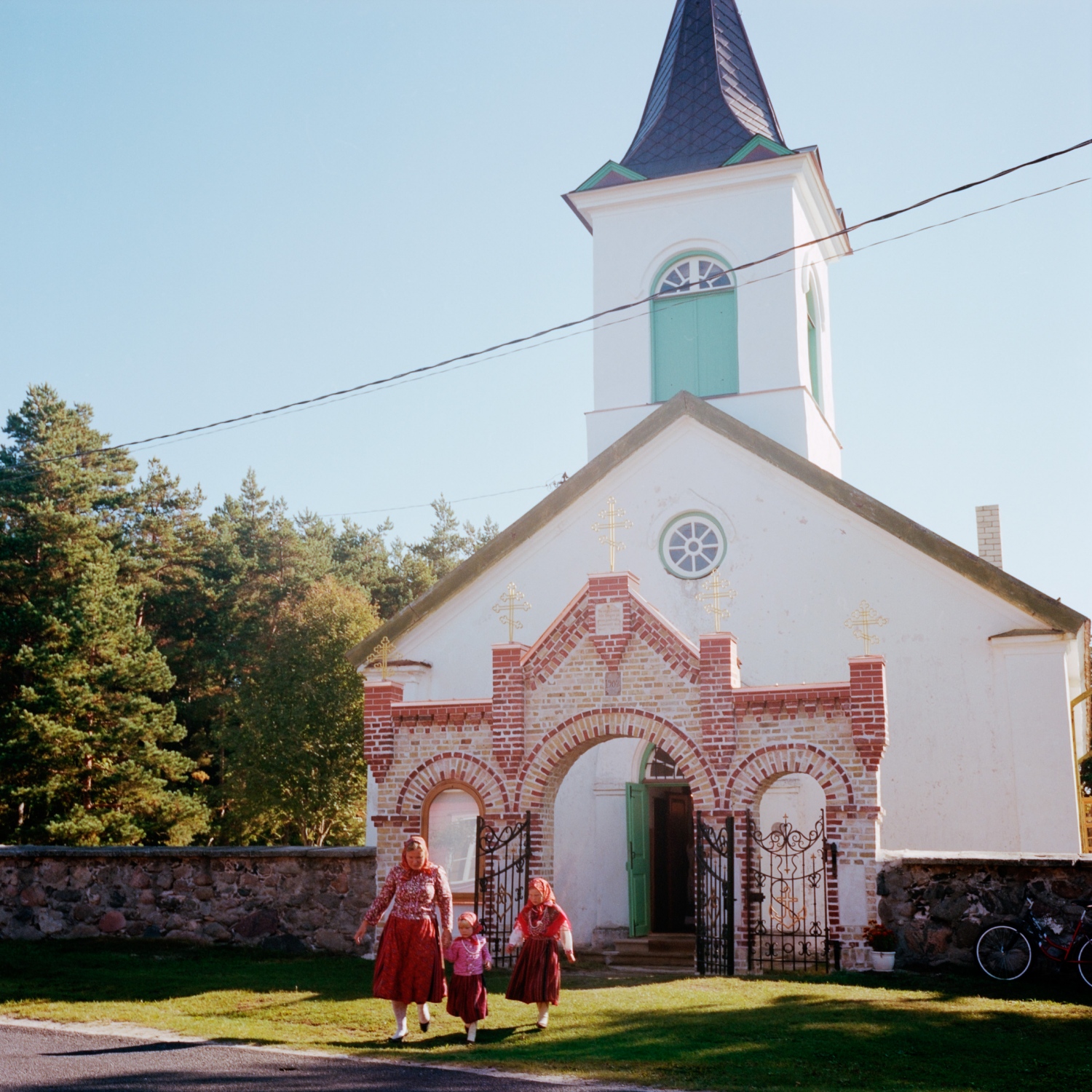 Mare Mätas and her children after the celebration of a christening during the visit of the patriarch Bartholomew of Constantinople in September 2013. The church of Kihnu belong to the ecumenical patriarch of Constantinople. Almost all the inhabitants of Kihnu converted to orthodox Christianity during the 19th century. In 1860, the Lutheran church on Kihnu was transformed into an orthodox church. 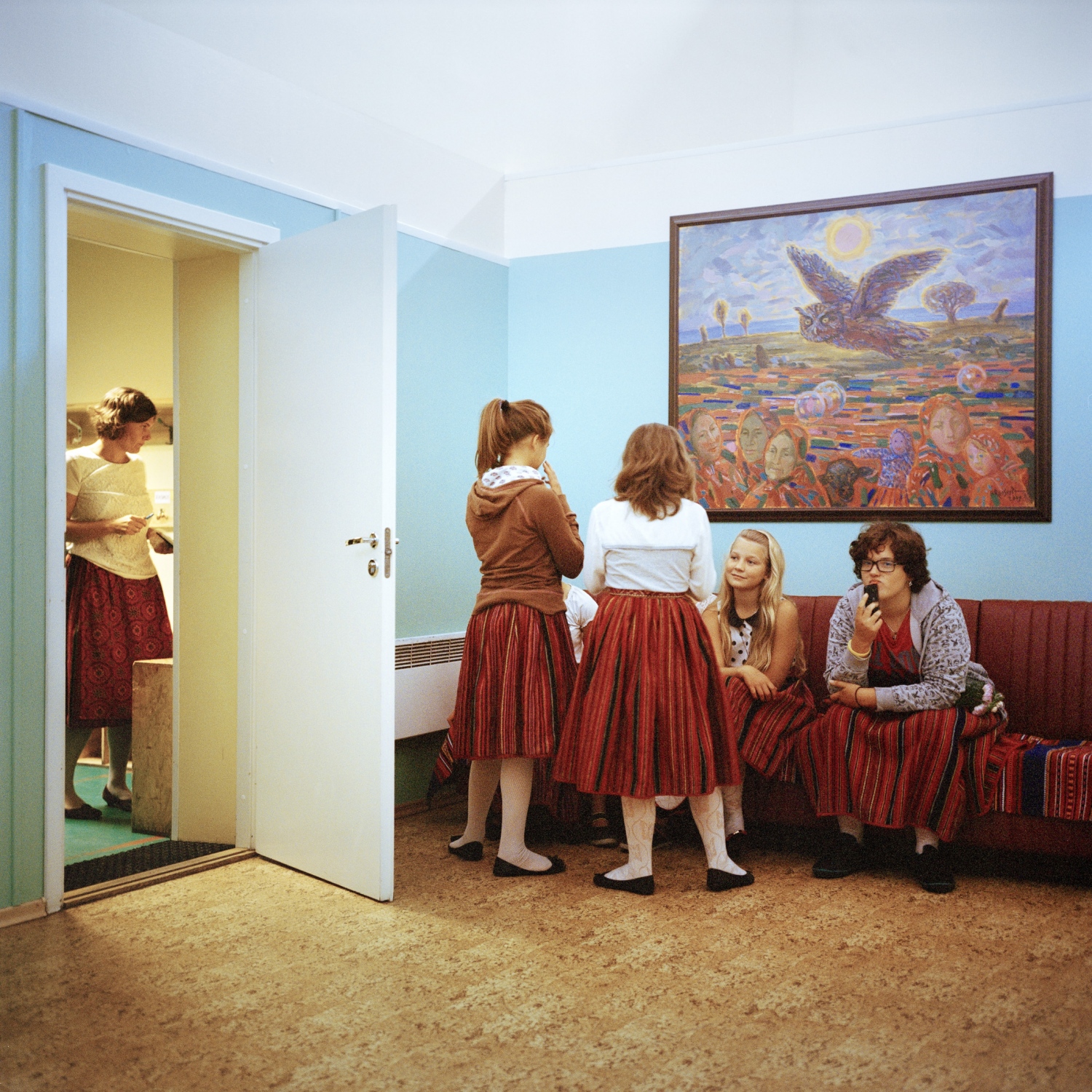 First day of school after summer holidays in Kihnu. The school of the island has 36 students (2013). To ensure transmission of the cultural heritage, the courses are taught in a local curriculum that includes Kihnu dialect, music and some manual work. 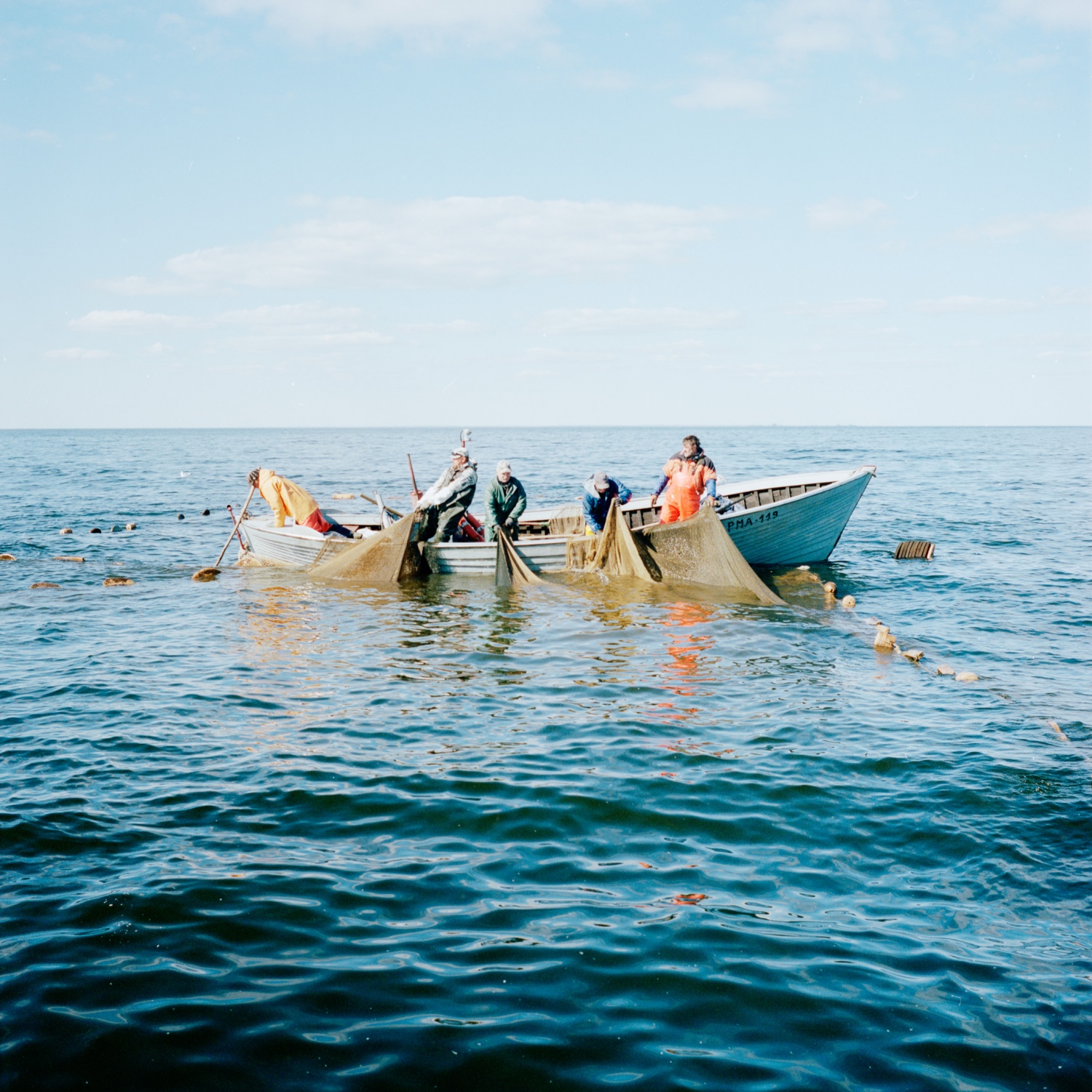 Margus, Eri, Eri, Edward and Haido are fetching their net before collecting the herring that it contains. This day, the net will hold about 4 to 5 tons of Baltic herring. 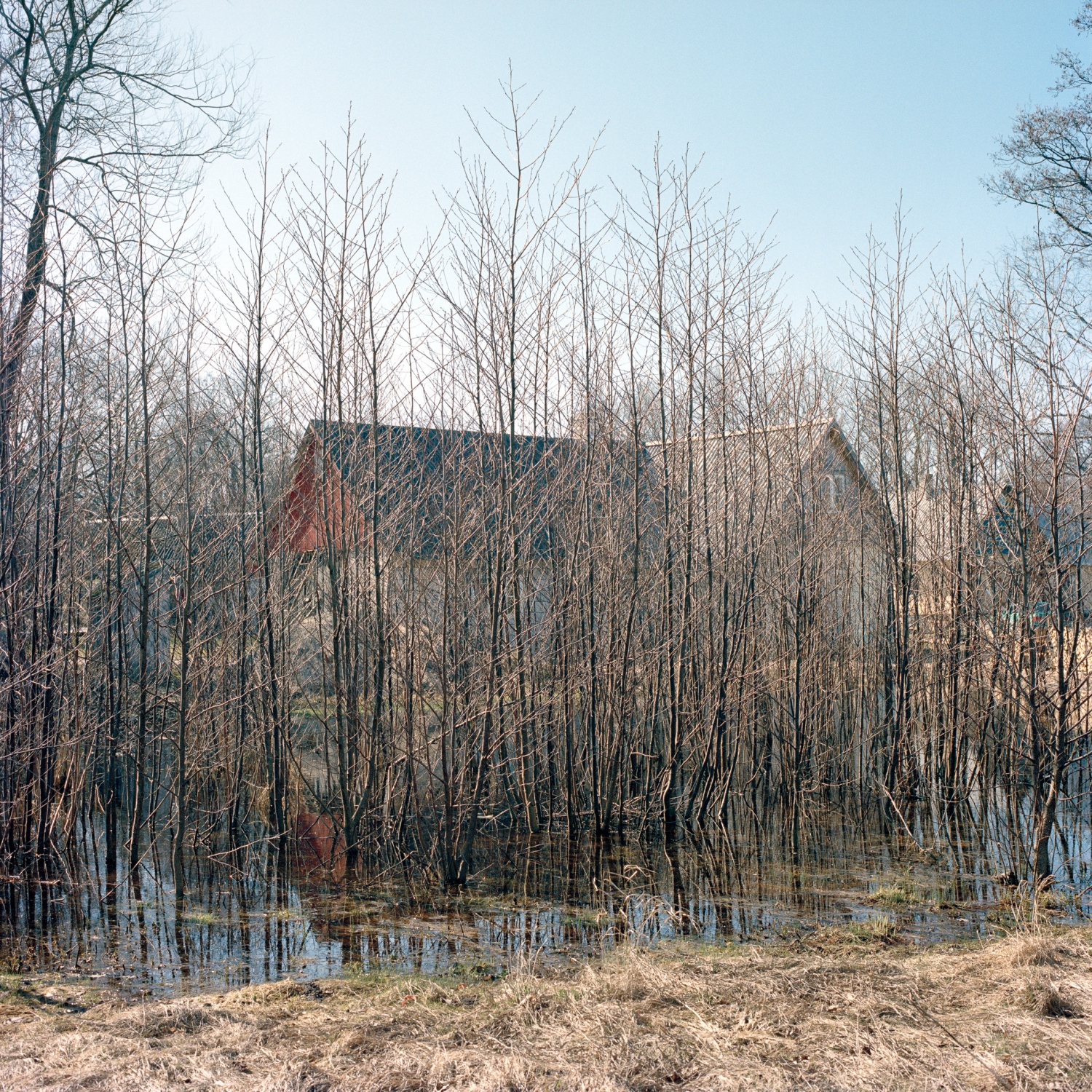 Winters are tough and long on the island. The melting of snow and the ice breakup means the resume of the economic activity which mainly remains on the development of a controlled tourism. 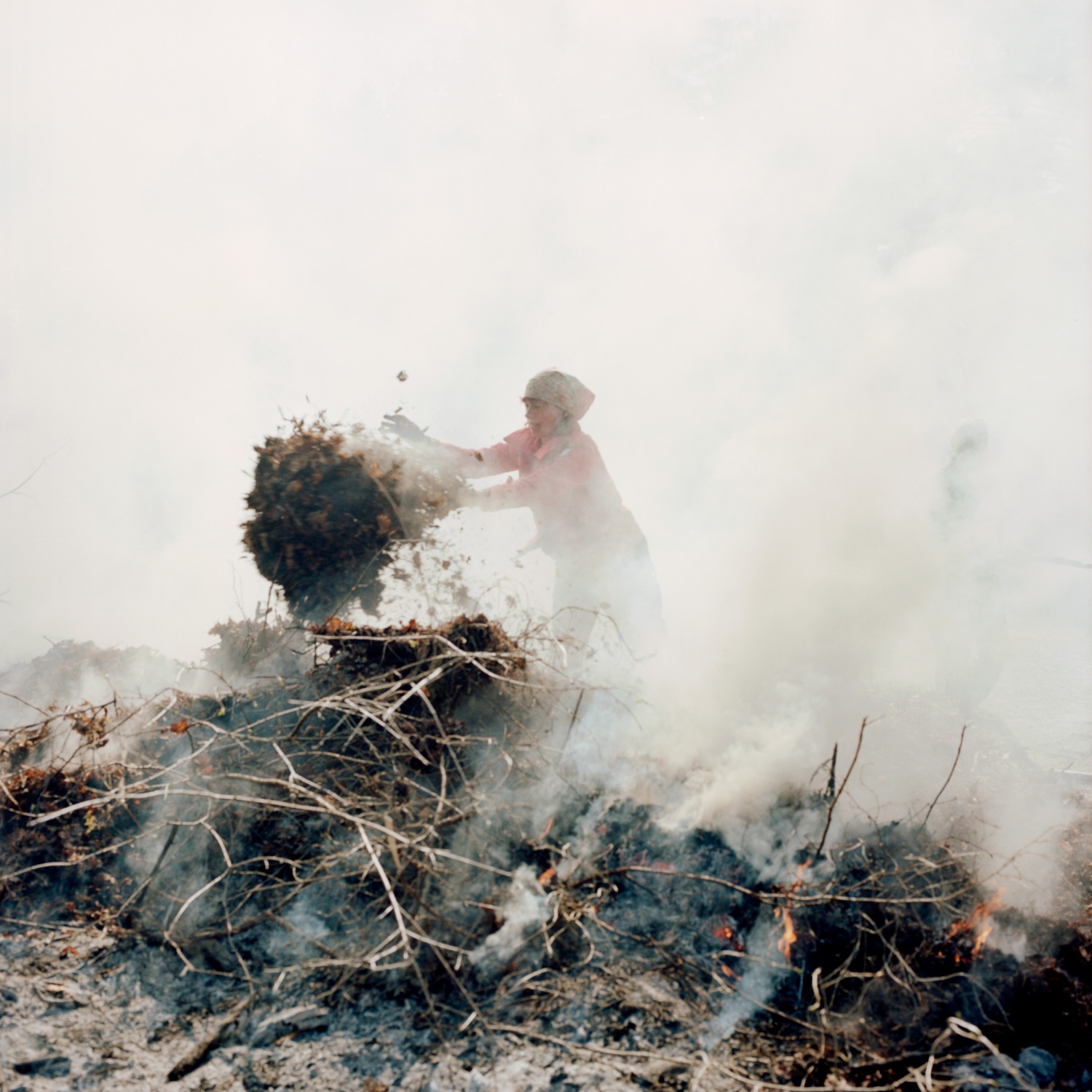 The 1st of May after the snow melting, Kihnu inhabitants are cleaning up the island. 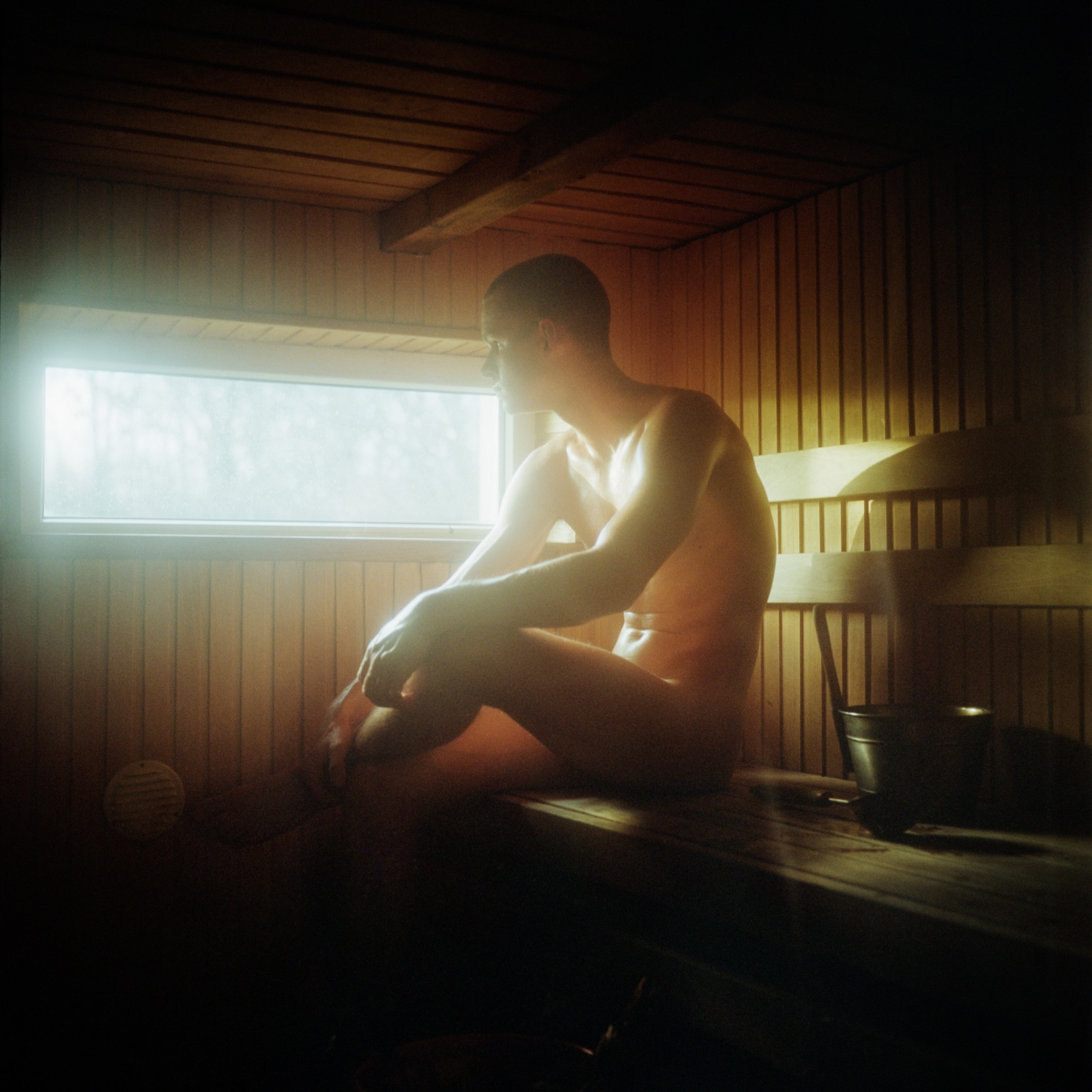 Martin rests in his sauna after helping his family to clean up the house before the long traditional Christmas celebrations. 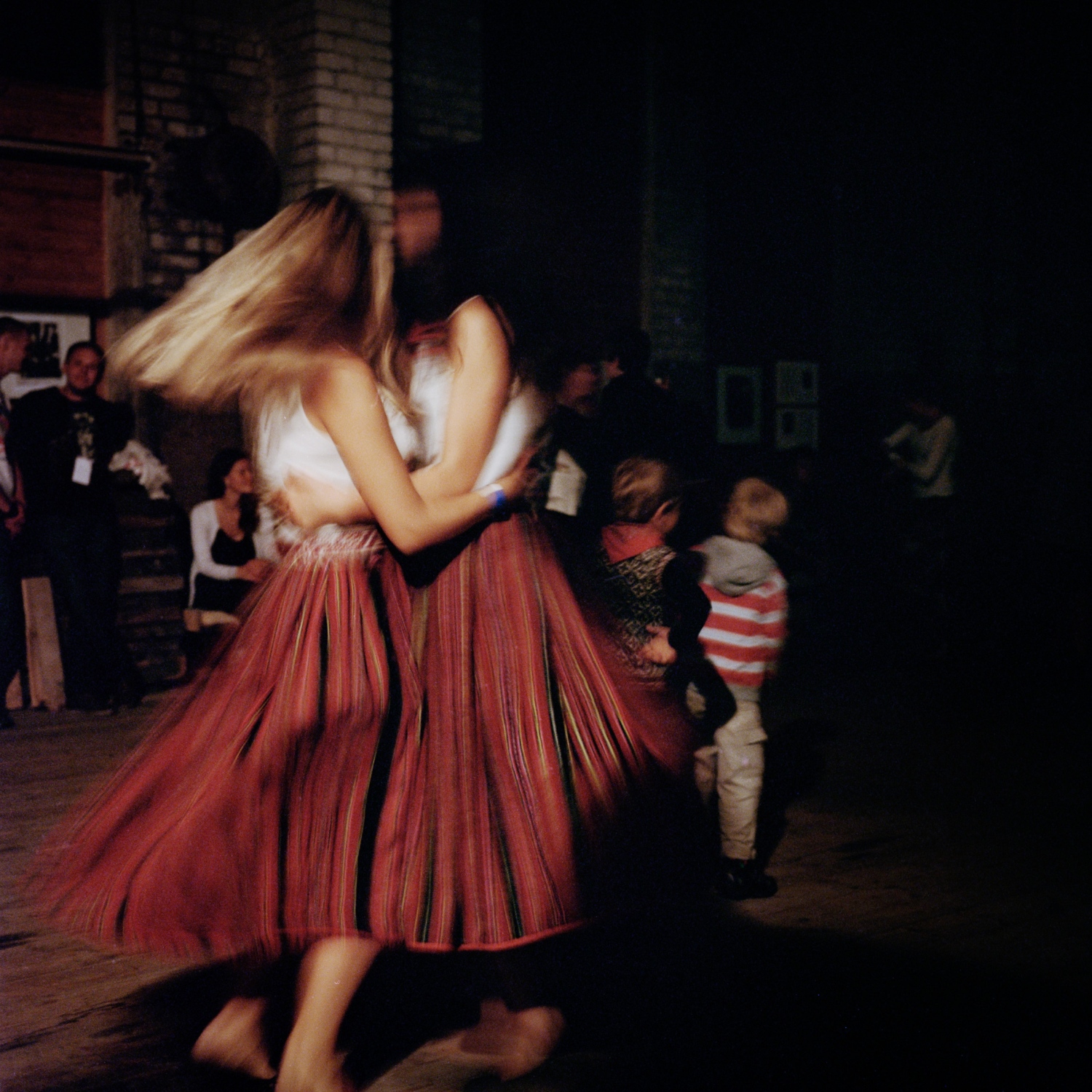 During celebrations, as the men talk among themselves, the women, independent and proud, dance together without waiting for an invitation. Surely part of the cultural heritage from the time when men would be absent for so long when they were out at sea... 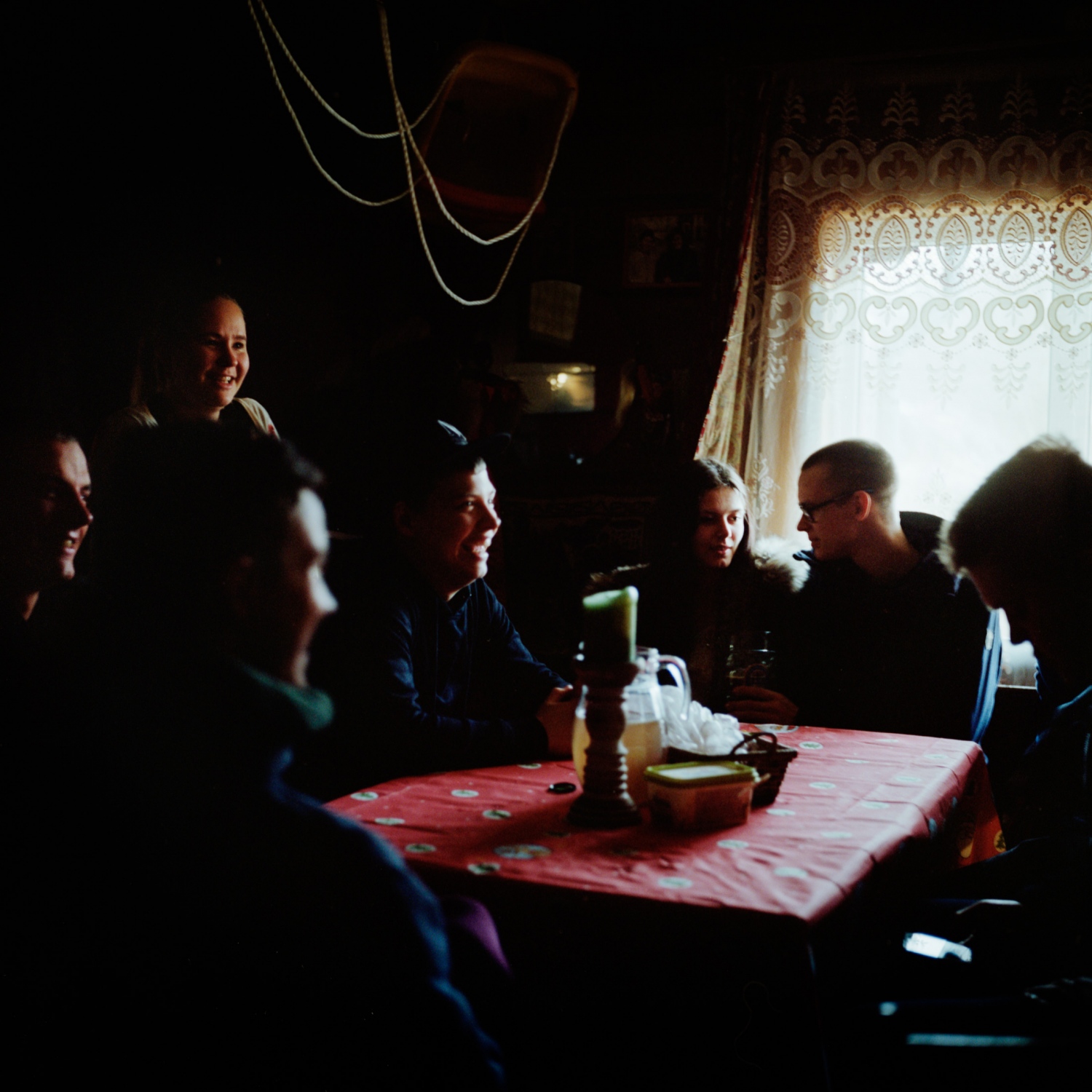 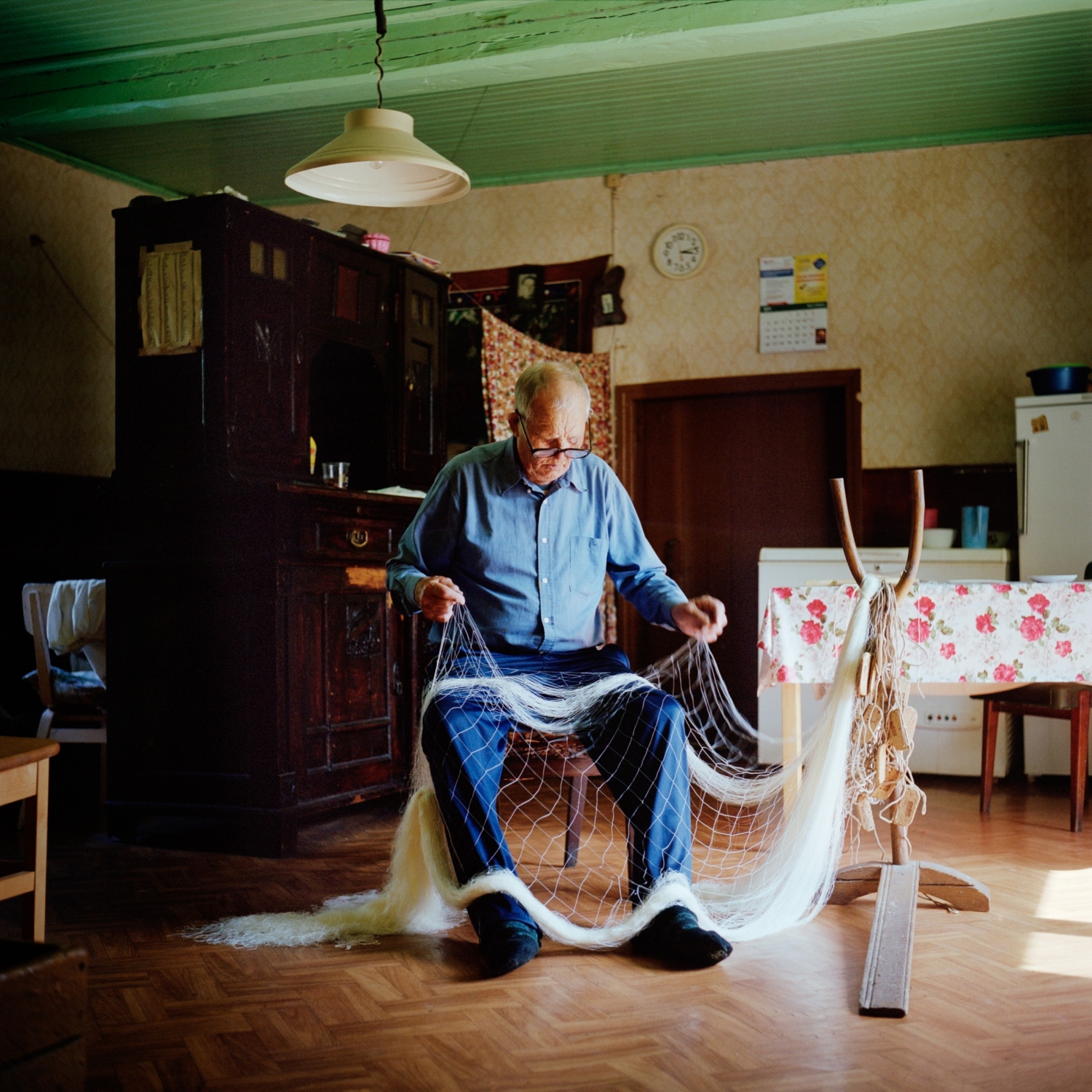 Mihkel Lilles went fishing for the first time with his dad when he was 6. Today, he is 84 years old and although every year he spends time preparing his boat for fishing, he hasn't gone out to sea in 6 years. But that hasn't stopped him repairing old nets and preparing new ones. 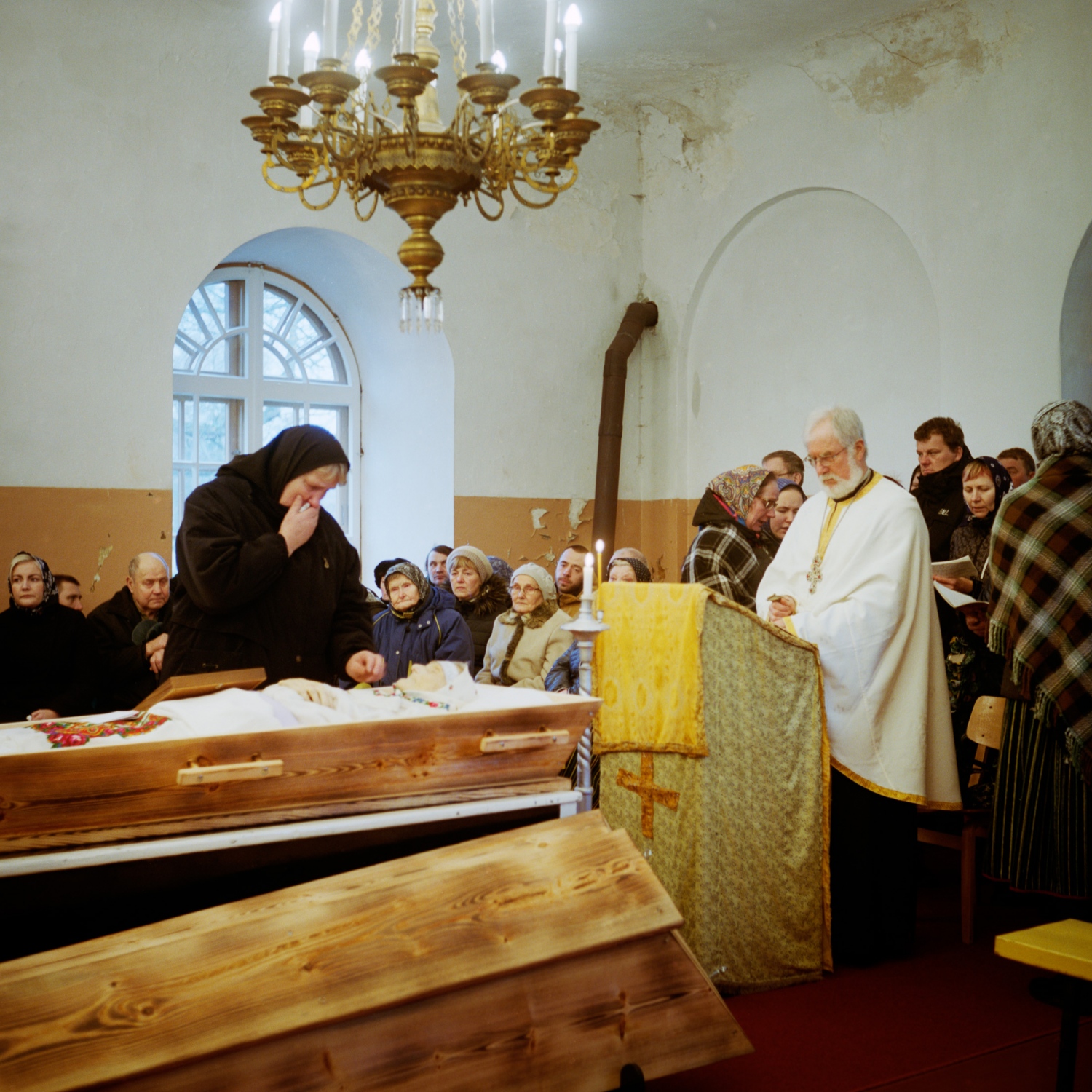 The Kihnu population is decreasing. Elders are passing away and youngsters are leaving for the mainland. Few days after Christmas Kandi Vilma passed away. the orthodox priest of Kihnu, Viktor Merik is saying her last mass. 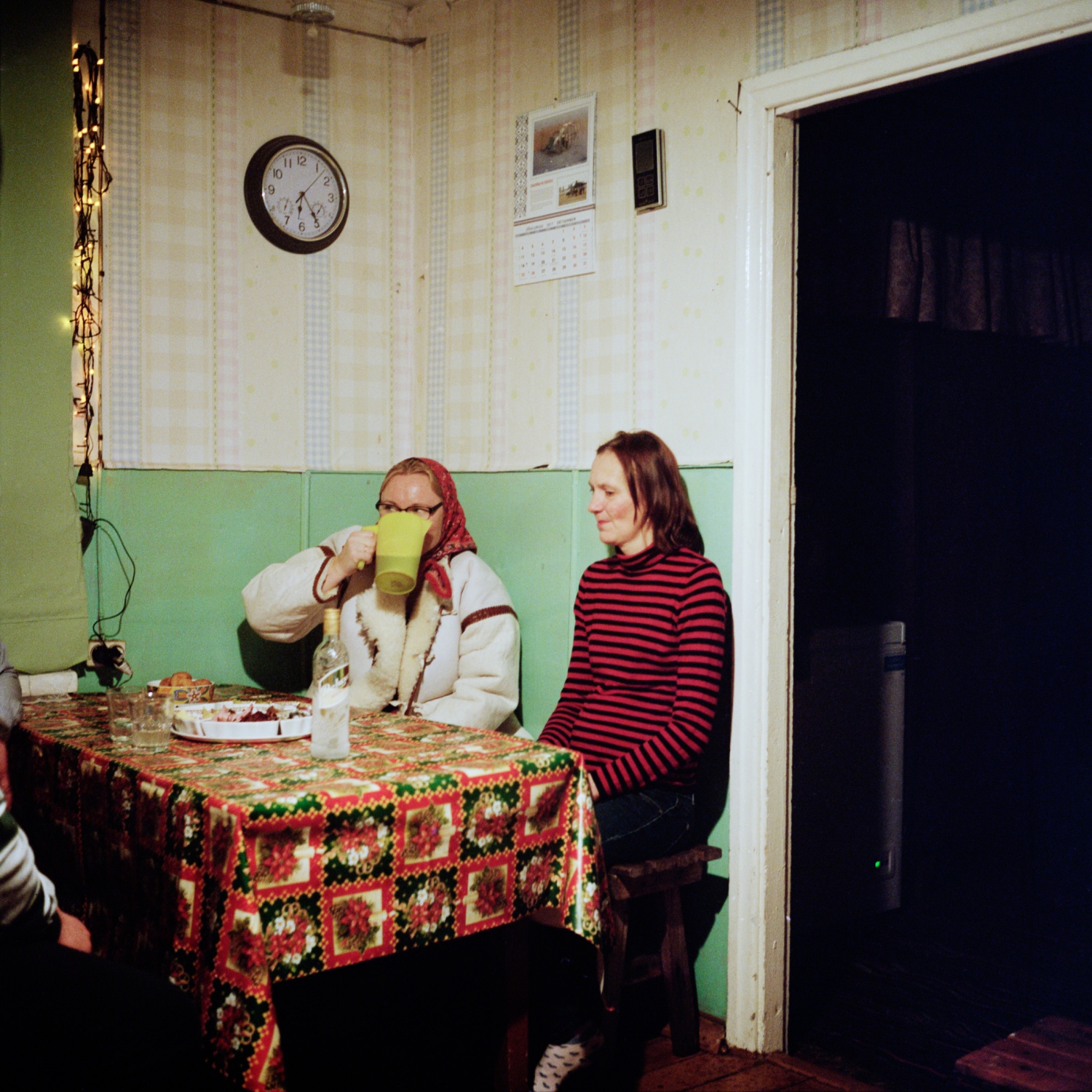 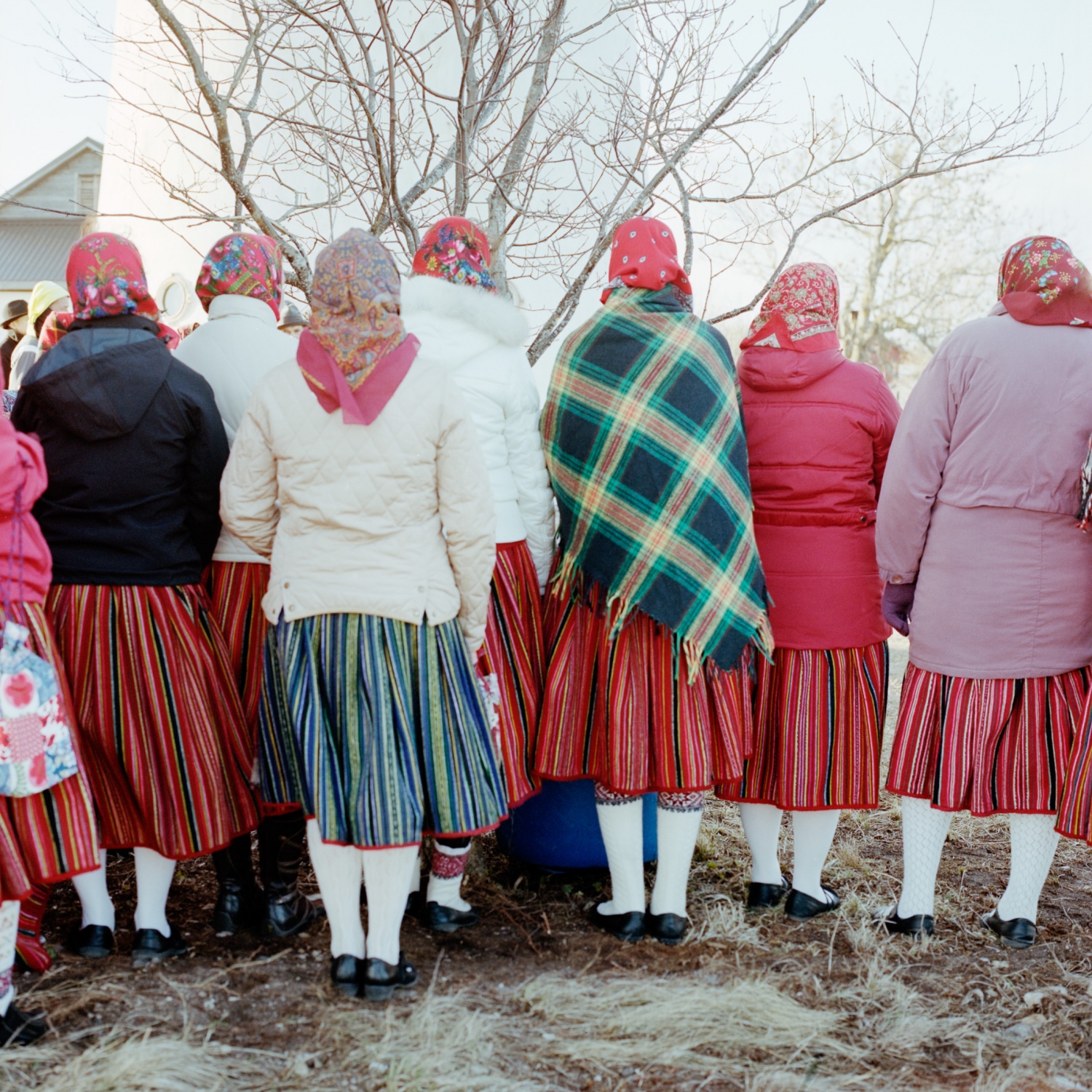 The colour of this skirt is imbued with meaning. During mourning, the skirt should be black, and progressively, with time, blue will be reintroduced before the skirt eventually turns bright red again. As skirts always retain some mark from the mourning period, younger women tend to wear much brighter skirts than older women. 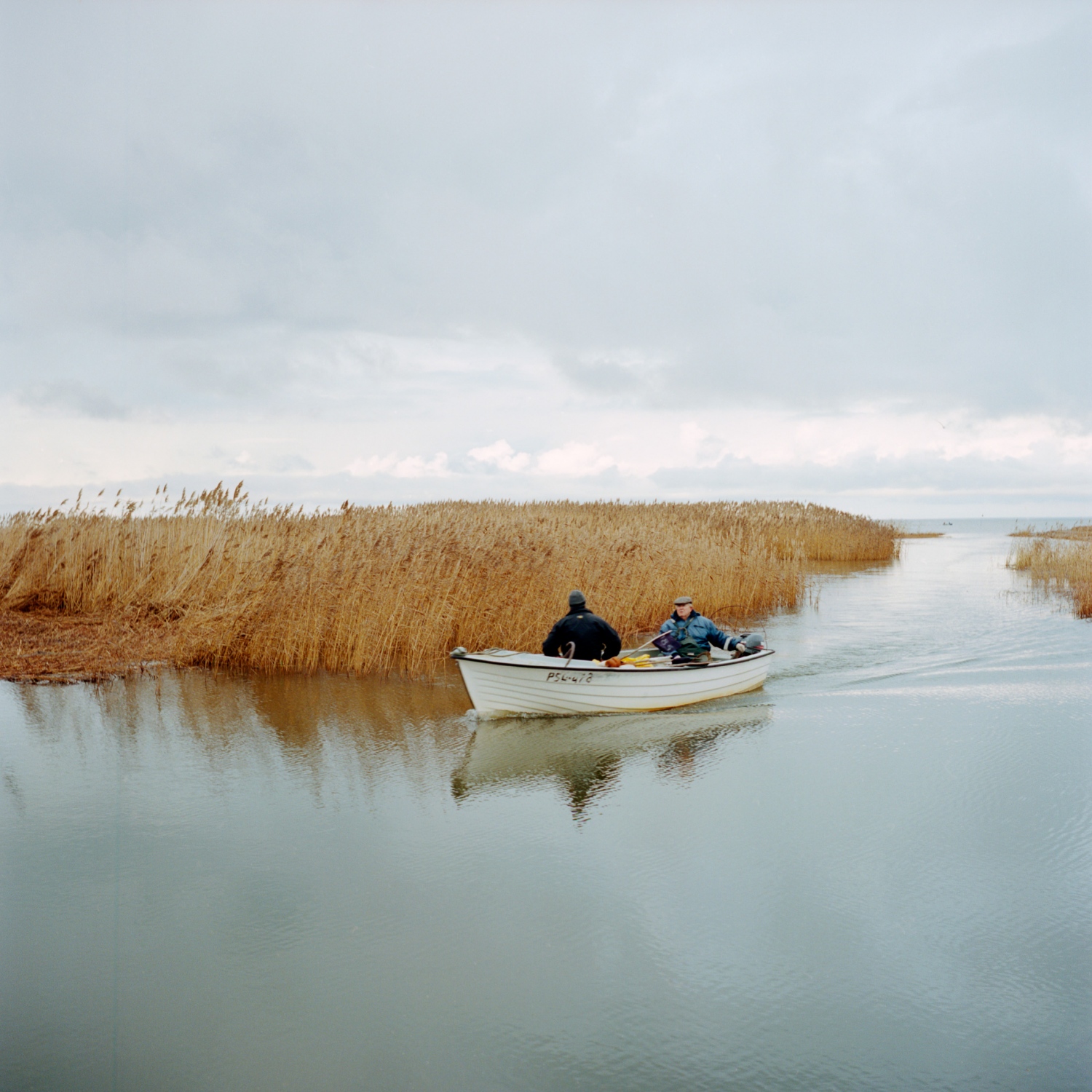 Years ago, fishermen were the one to bring income to the families. Today in Kihnu, the fishing industry is decreasing. Tourism is gradually taking over to complete families income. 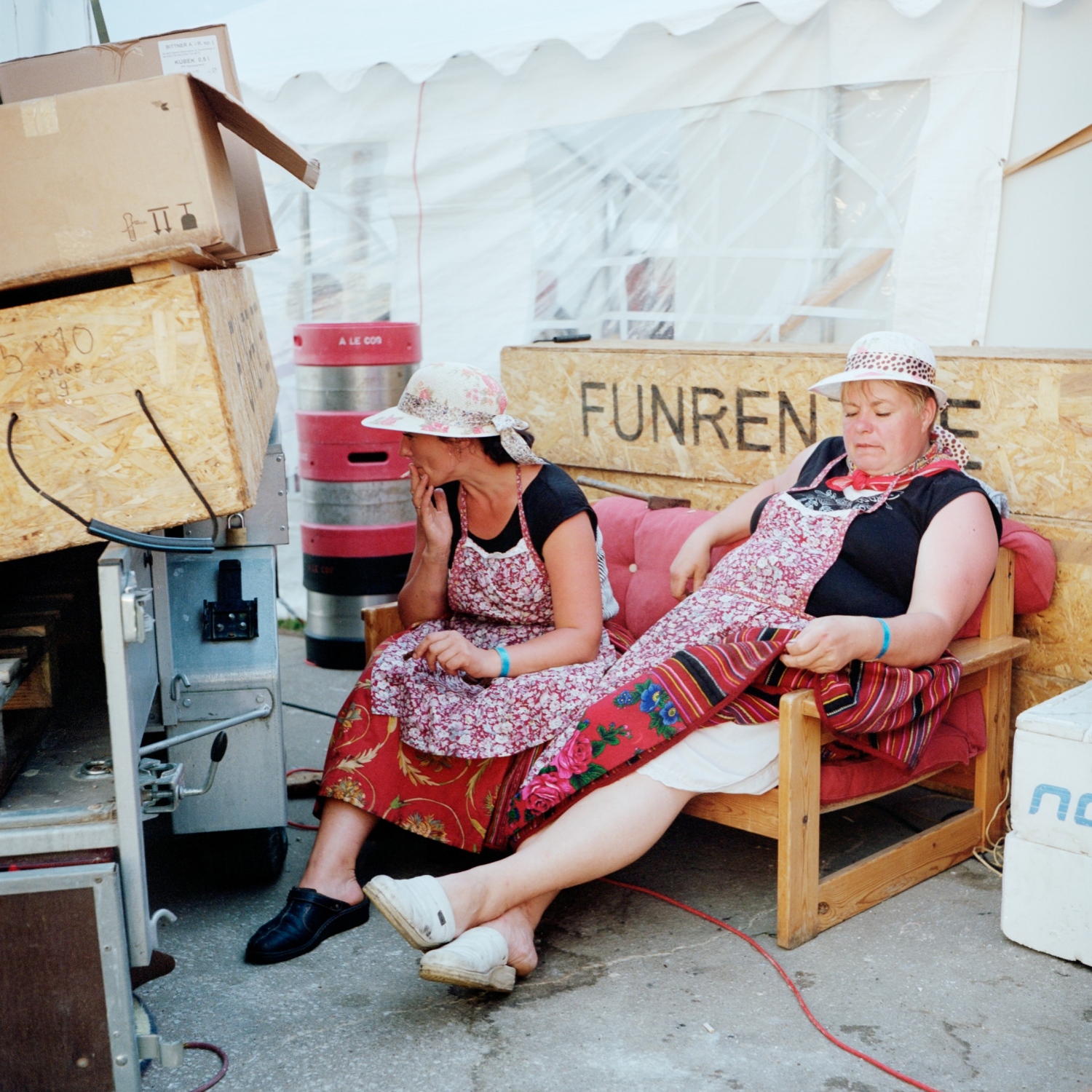 Driven by season, summer is economically important for the island. A lot of people come from the continent. Here during the Mere Pidu (sea festival) Talvi and Merike are resting in between shifts in the kitchen. 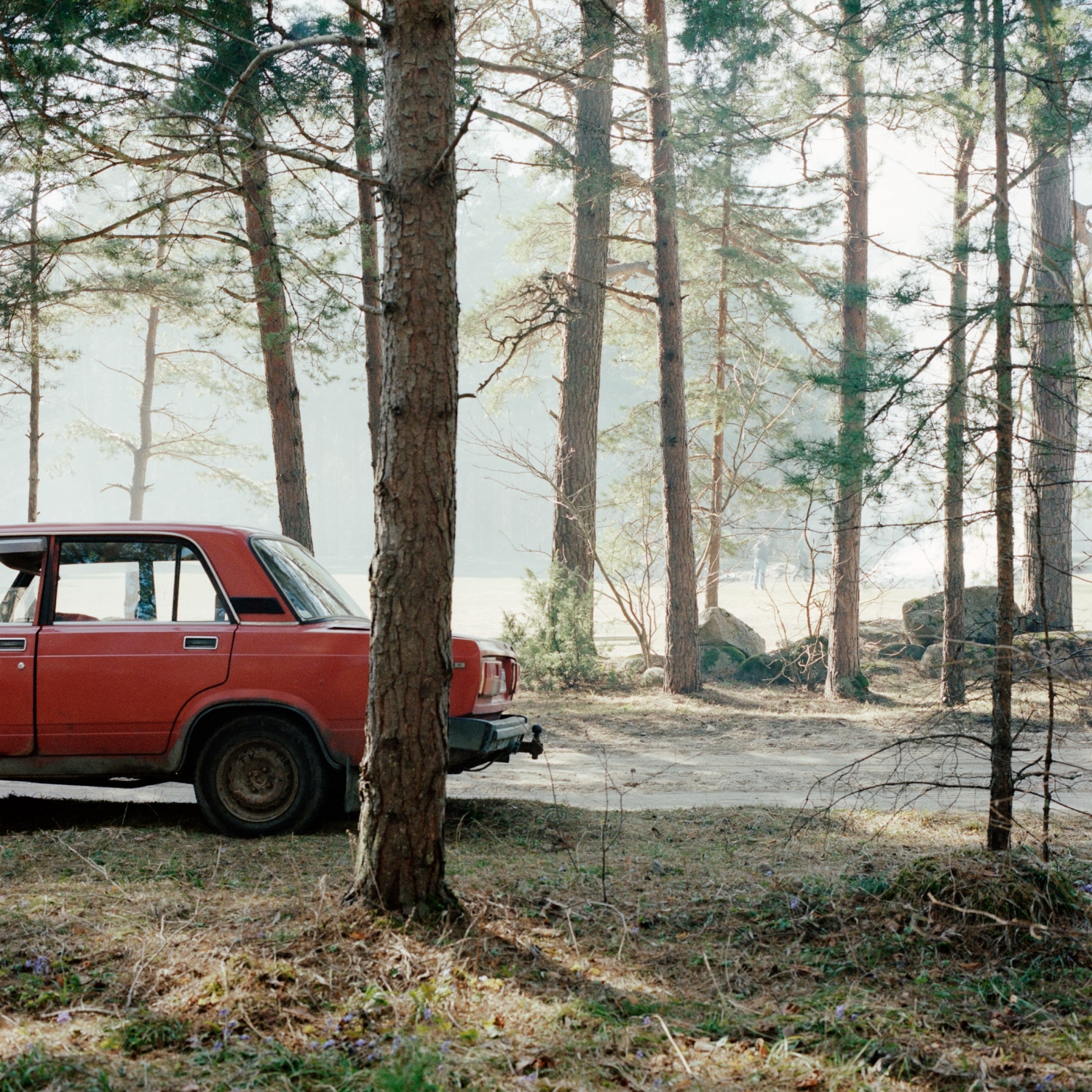 Despite a number of symbols that remind us of its soviet past, if today Kihnu’s traditions are still alive, it is potentially as a result of its isolation and an existing collective organisation, which might have protected it from soviet authorities that forbade the practice of local customs. 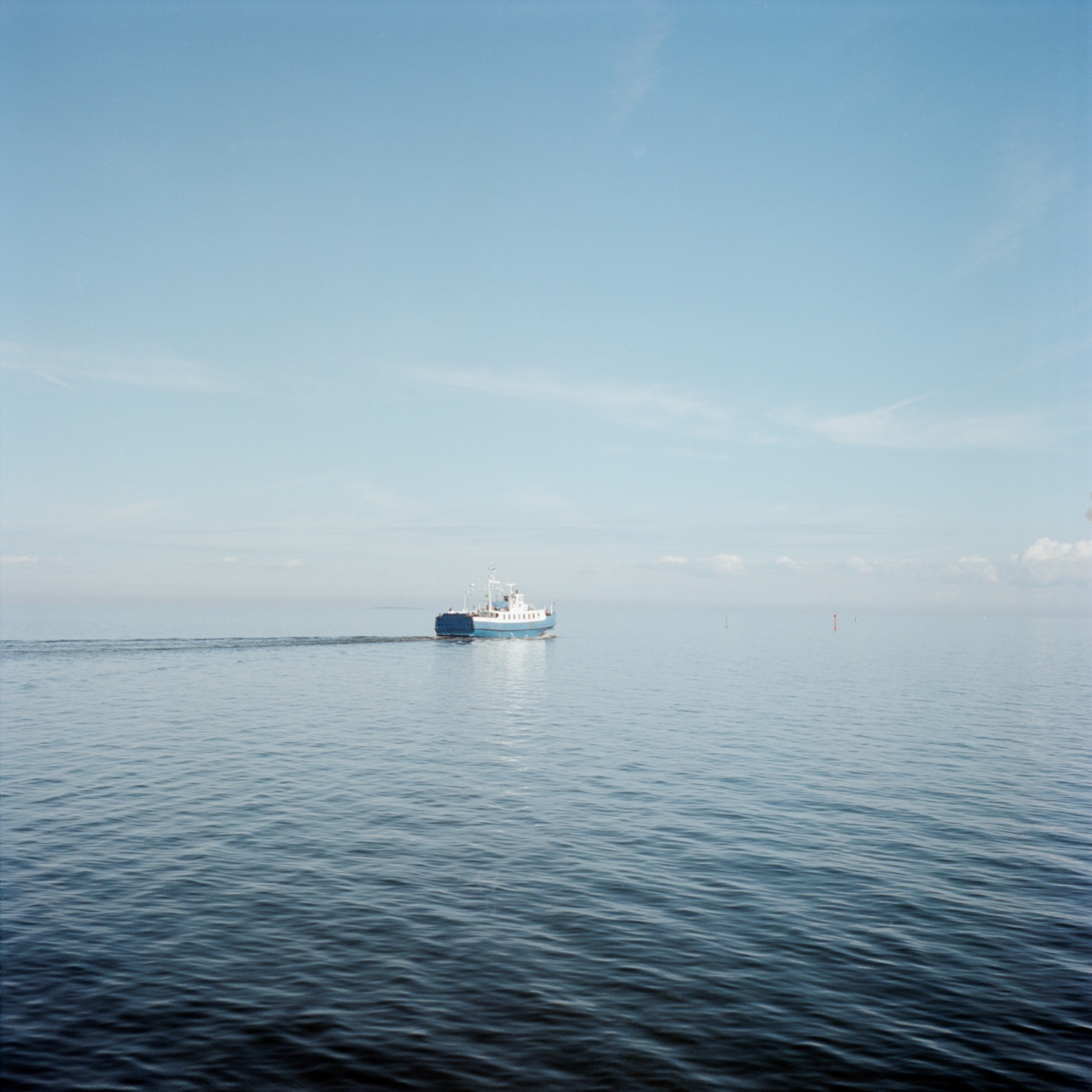 Between spring and autumn, two ferries link the island to the mainland. In winter, when the Baltic sea is frozen, more often, travel between the two would have to be done by plane or, if the temperature allows it, it is possible to drive across the frozen water.