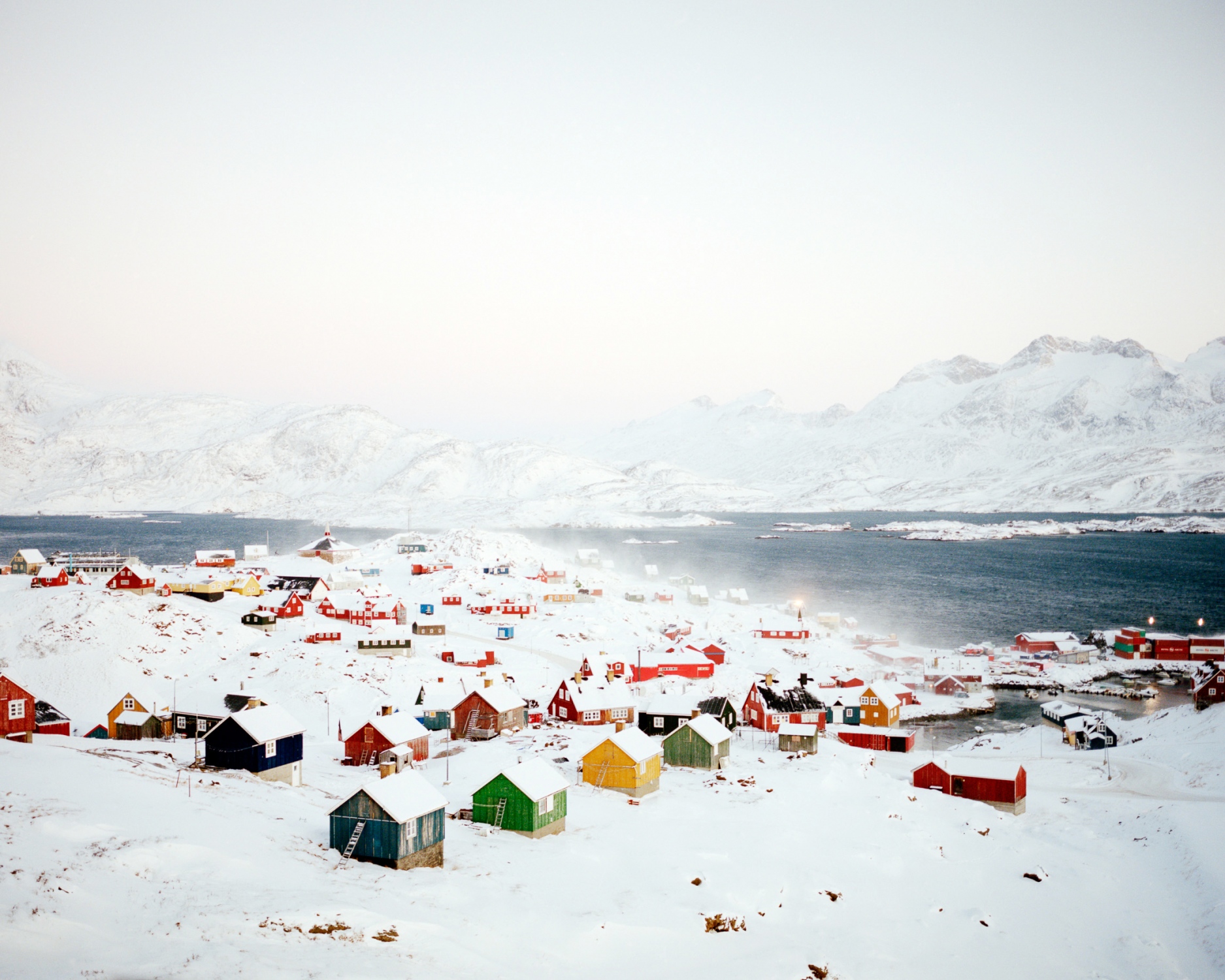 Piterak, a strong wind carrying a high density of cold air from a higher elevation down a slope blows over Tasiilaq. As a result the village is disconnected from Greenland and the World.

Each town in Greenland are linked to each other by airplane or boat only. 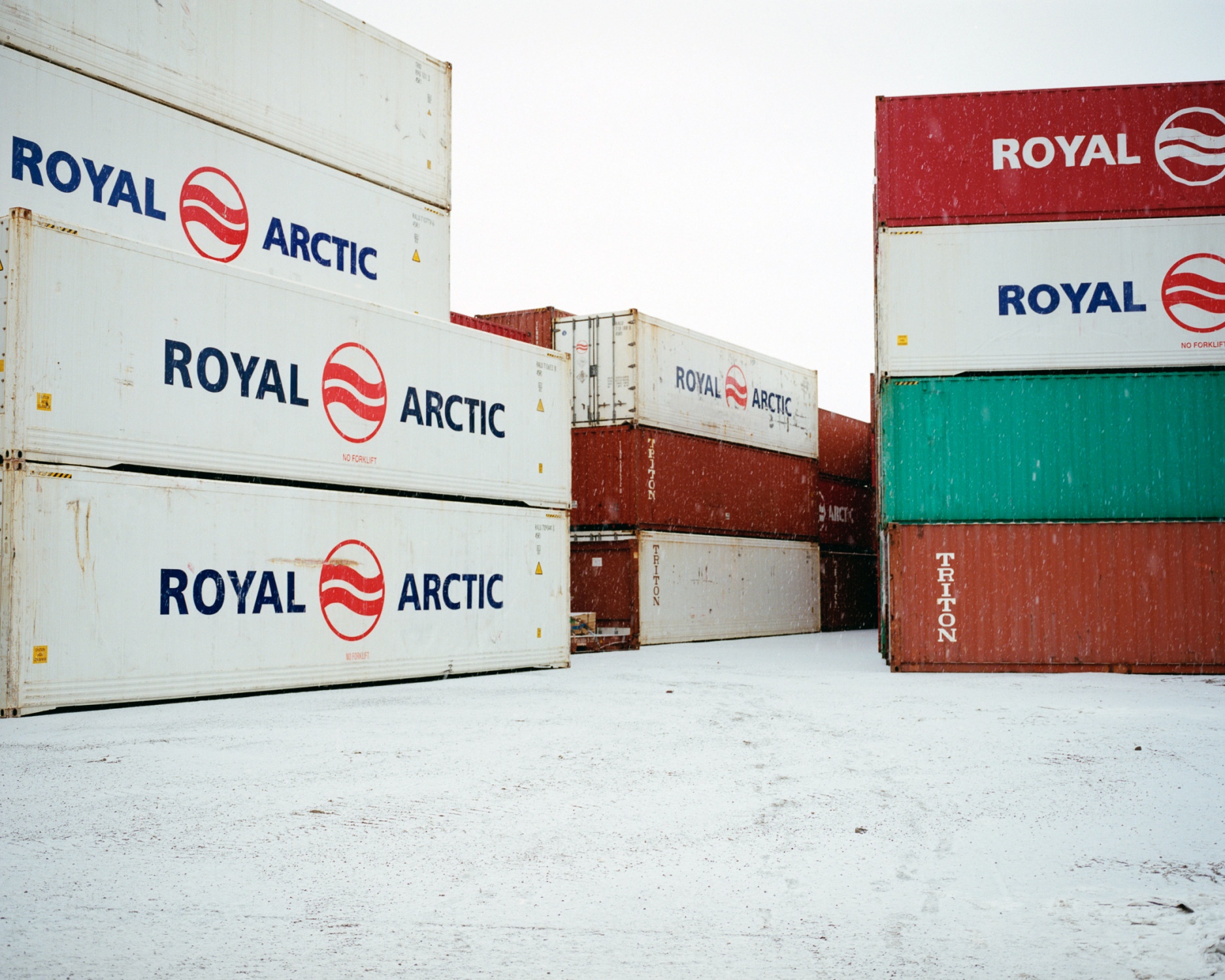 November in Tasiilaq. The last containers are brought from Denmark. The next ones will follow in July. In the meantime, Tasiilaq is furnished through airways.

Located on the east coast, Tasiilaq is one of the most isolated village in Greenland, but also the poorest holding a high unemployment rate (about 23% in 2015). 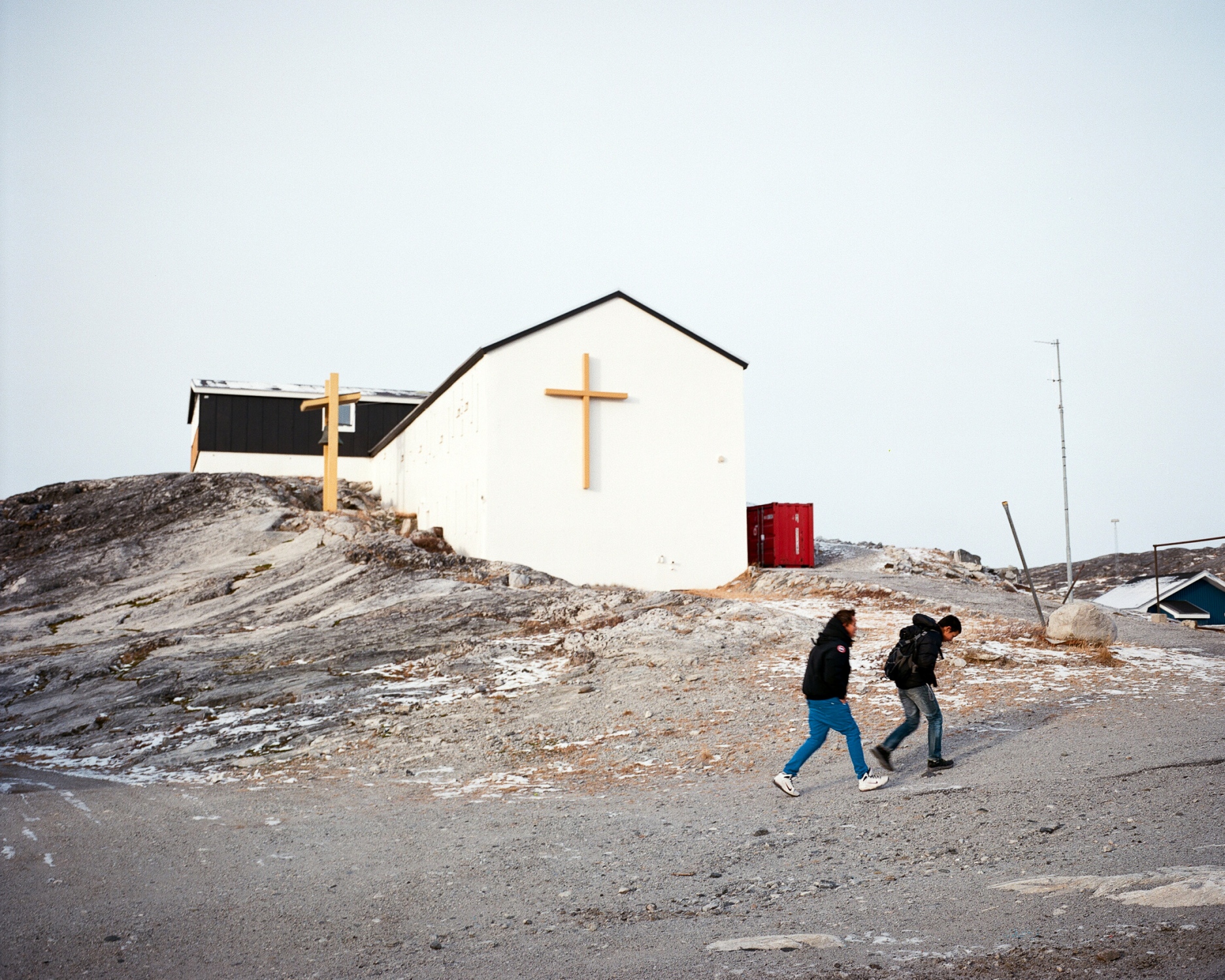 Greenlanders were Christianized around the year 1.000. Most of them are Lutherans. But a lot of traditional Inuit beliefs remain. it is often said that Christianism and colonialism started to bring social and moral issues on the island.

Here is the Krist Konge Kirke, the sole catholic church of Greenland, located in Nuuk. 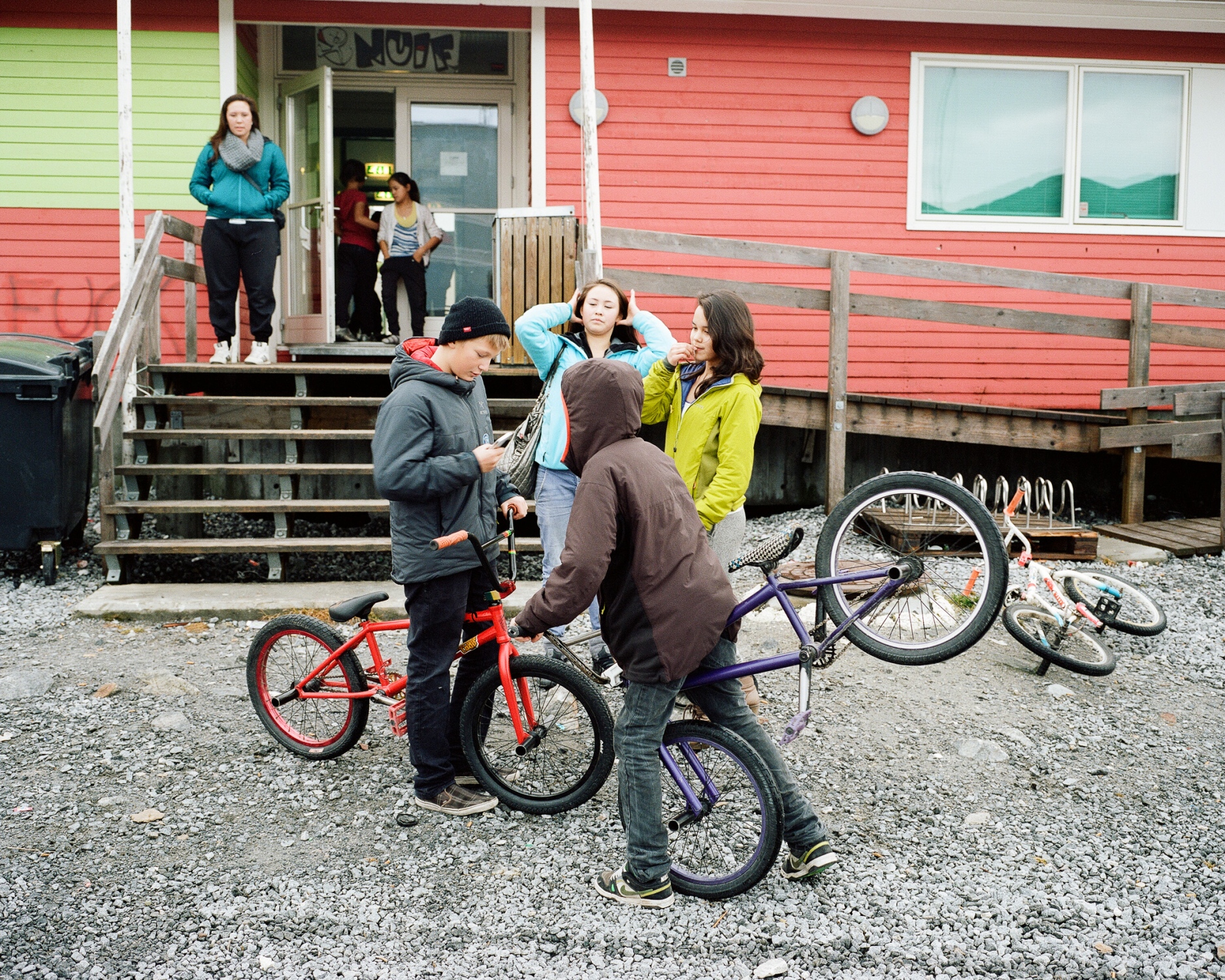 Today most of the youngsters turn away from the traditional Inuit lifestyle attracted by westernized culture such as in the USA or in Denmark where they usually go to study if they follow a curriculum at the university.

Here, after a breakdance class, youngsters are chatting in front of the Nuuk youth center.

Nuuk is the capital and administrative center of Greenland concentrating the home rule government institutions. 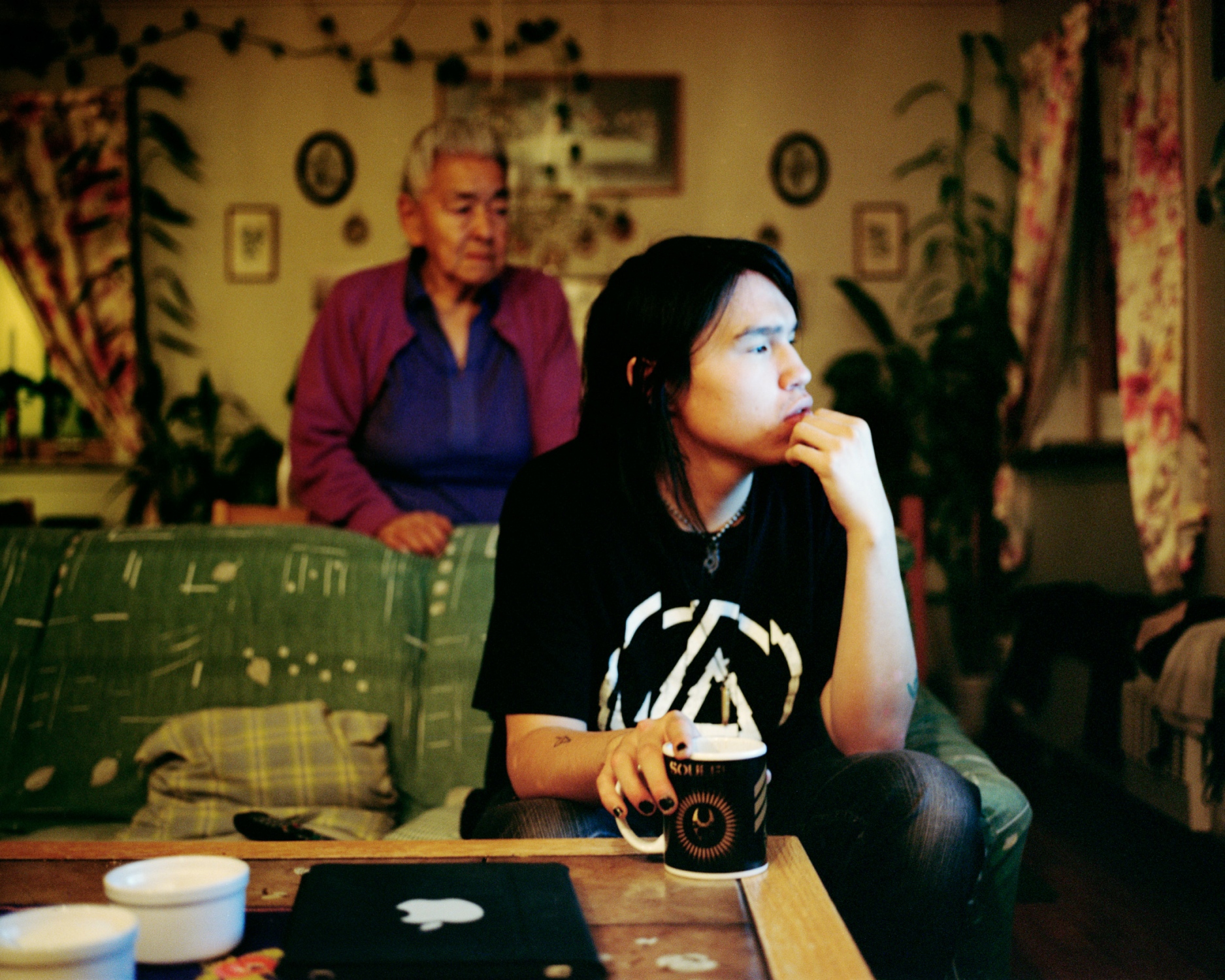 Malik is living with his grand mother in Uummannaq, a traditional village of fishermen and hunters located above the polar circle. As Greenland went through a fast and forced modernization over a short period of time, the grandparents, parents and children are experiencing an absolute different way of life which can lead to social issues as the connection between generations is often lost.

Malik is found of music. He plays in a local music band dreaming of leaving his village. Uummannaq doesn't offer him a lot of opportunities and the village as many in Greenlands suffers dramatic social issues. 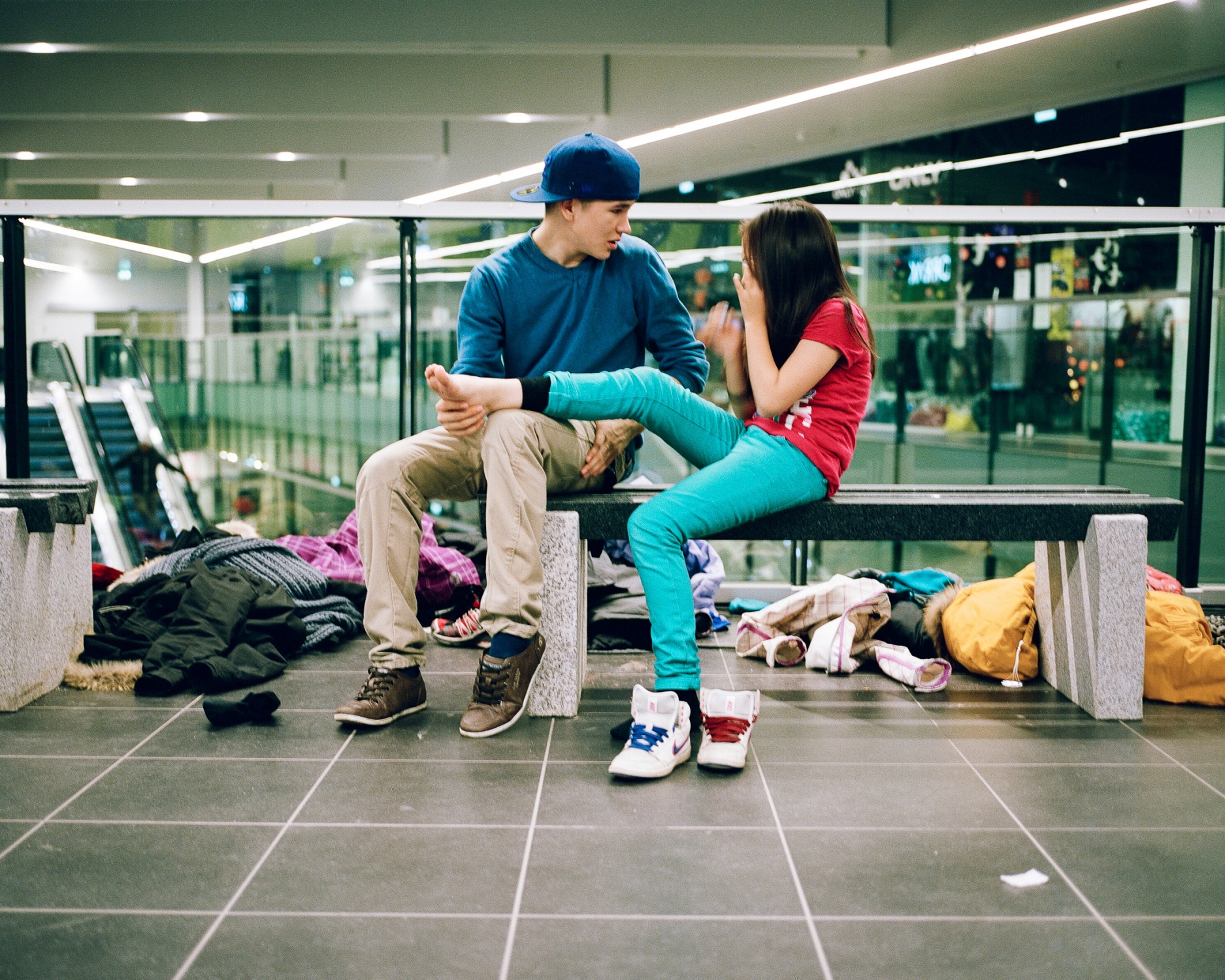 Innunguaq a breakdance teacher is taking care of his student who just got wounded while practicing at the Nuuk shopping mall.

Nuuk, the capital city is the most populated city in Greenland with 17,984 inhabitants as of January 2019. Many young people or families come from remote Greenlandic villages in order to find a job (or to study at the Nuuk University) although most of the qualified jobs are mostly taken by an educated population from Denmark. 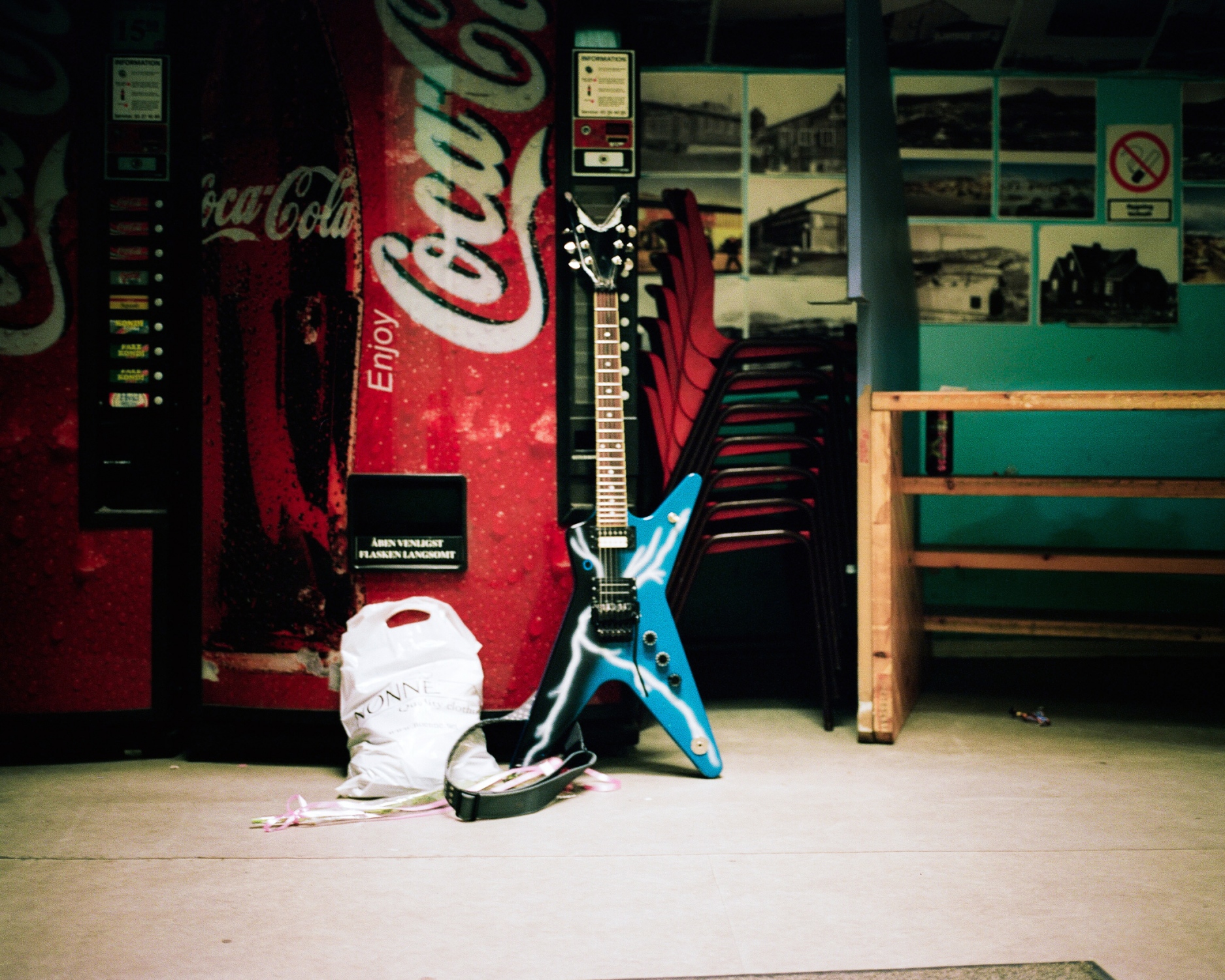 A guitare stands at a song contest organized by the Nuuk's youth center. Most of the young people playing music are influenced by European or American styles of music, such as hip hop or rock and metal music.

Music is for many youngsters an opportunity to travel in Greenland and outside for the most successful ones. 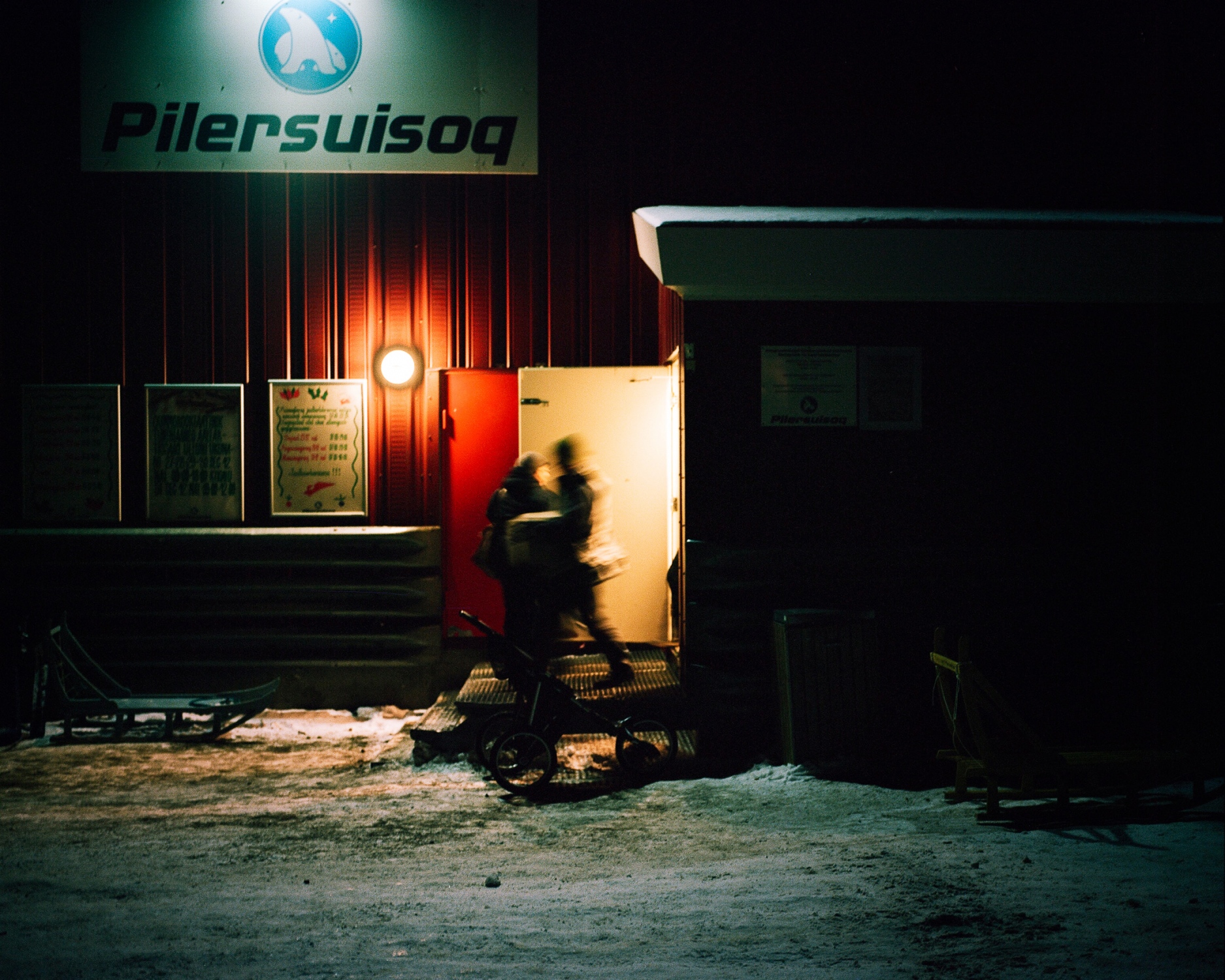 A supermarket in Tasiilaq. Most of the daily goods are found in supermarkets and are imported from Denmark at high prices. Supermarkets are also places where one meet and socialize.

Except of the youthclub, the stadium and the pub, there is not many places in Tasiilaq where one can gather. Located on the east coast, Tasiilaq is one of the most isolated village in Greenland, but also the poorest holding a high unemployment rate (about 23% in 2015). 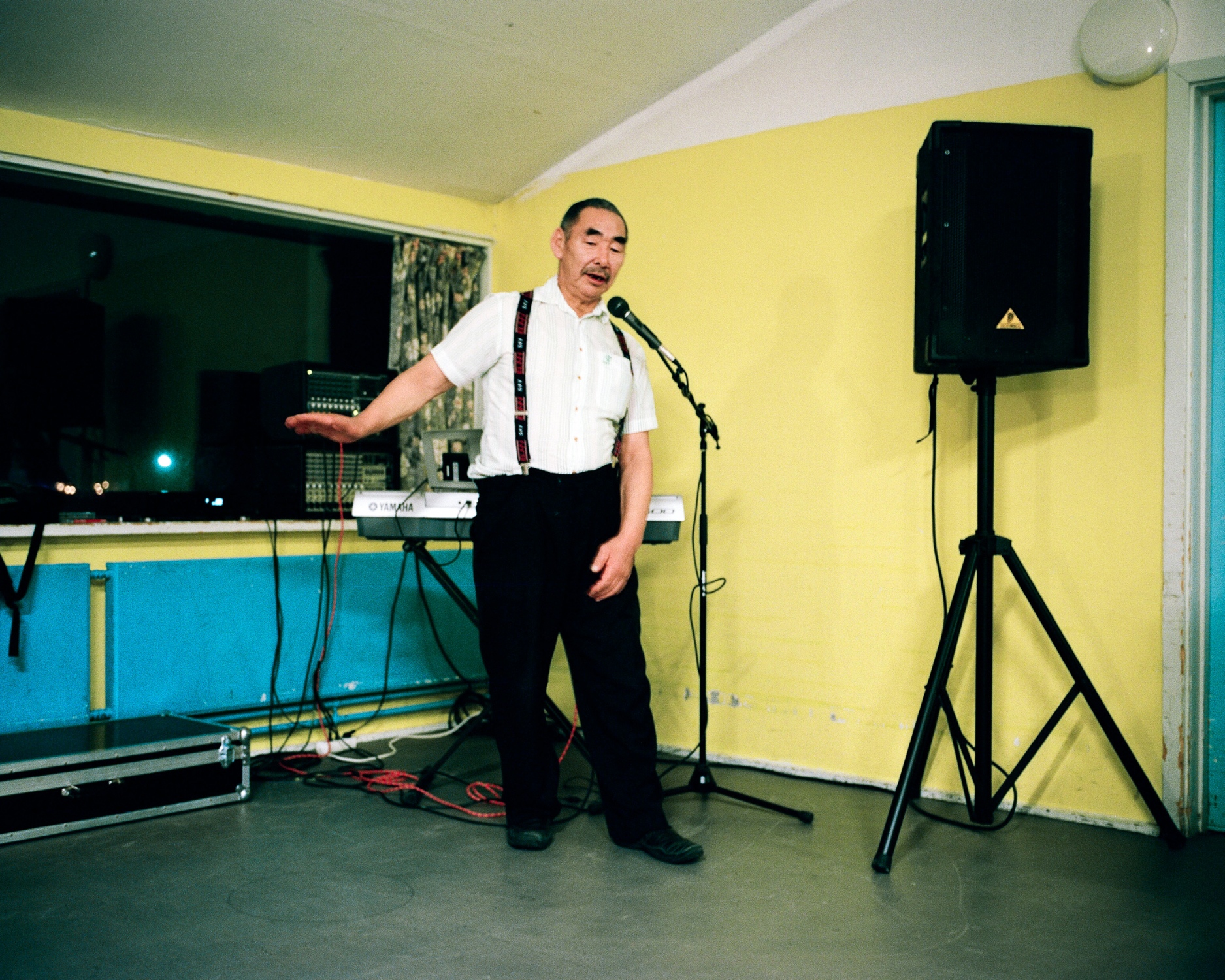 During a festive gathering in Uummannaq, a man tells a humorous story to the assembly. Traditionally story tellers, Inuit used to gather and tell themselves stories as to entertain their communities. 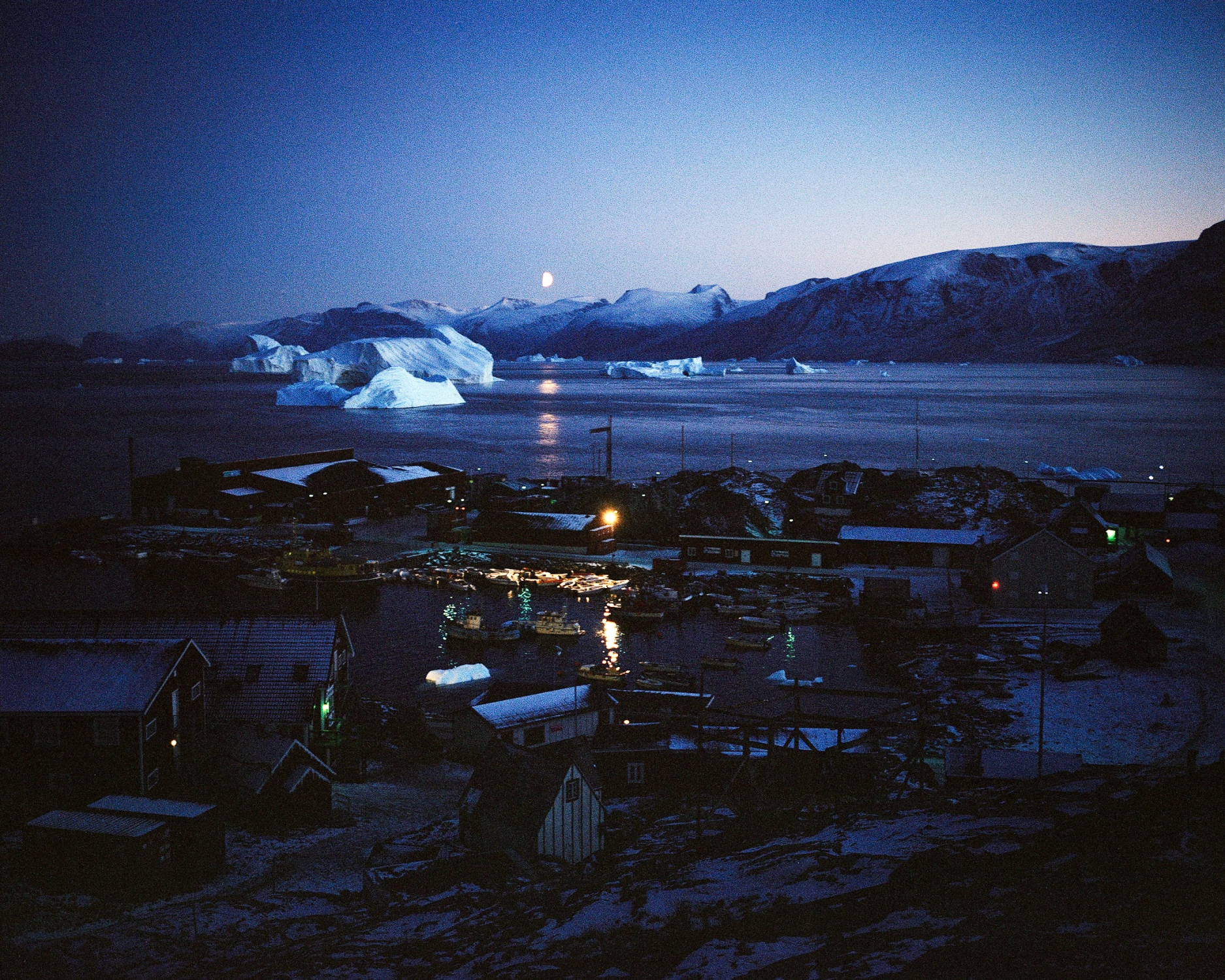 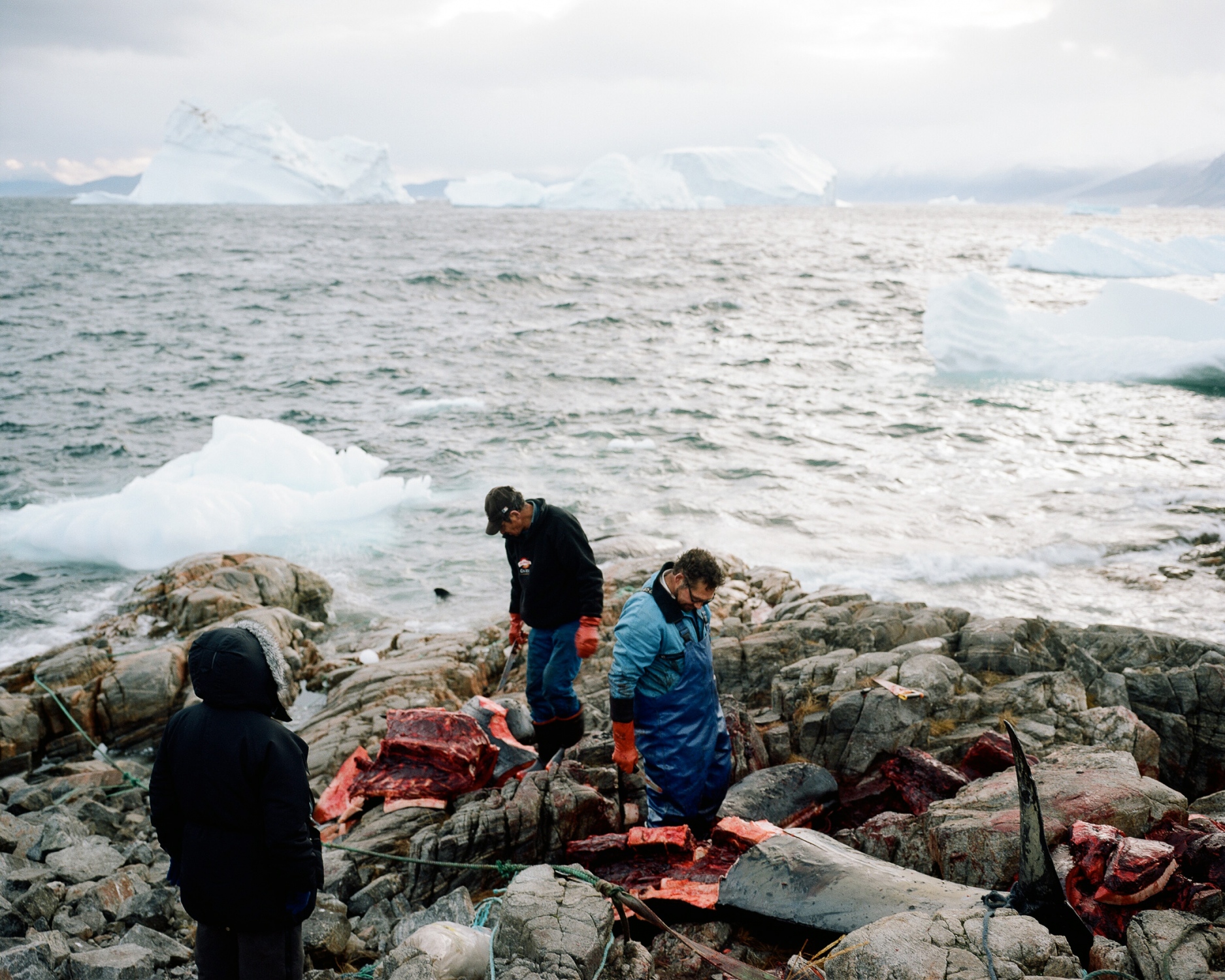 Pilot whales has been hunted then gathered toward the shore of Uummannaq to be slaughtered. Most of the youngsters are not very much interested in participating in this hunt. Mostly older men and women are seen at the event. The meat is later shared among the local community. 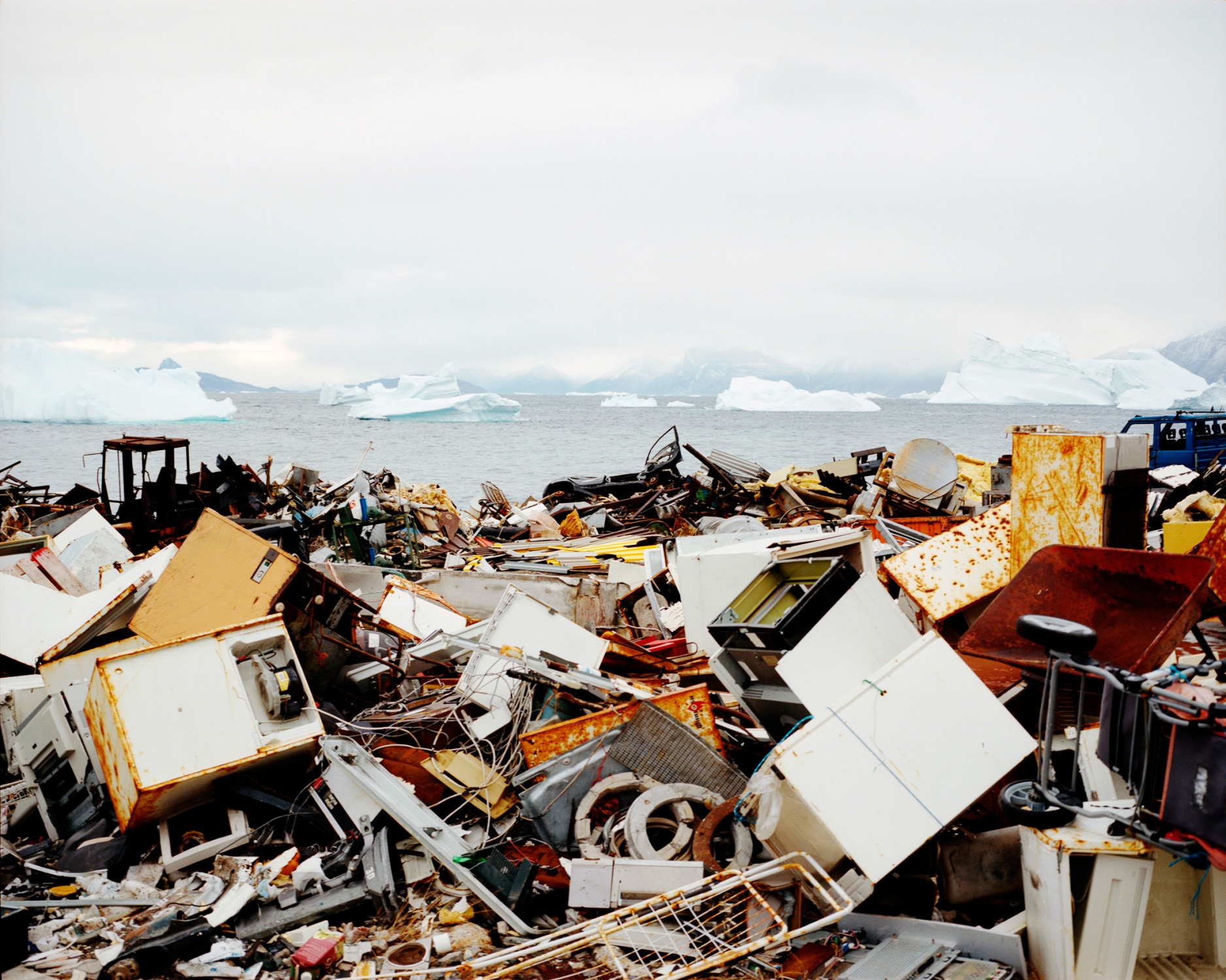 Rubbish tip in Uummannaq. As villages are scattered in Greenland and are bridged to one an other through air or sea ways only, it remains expensive to export trashes for recycling. Therefore as consumption is high, they accumulate at the exit of towns. 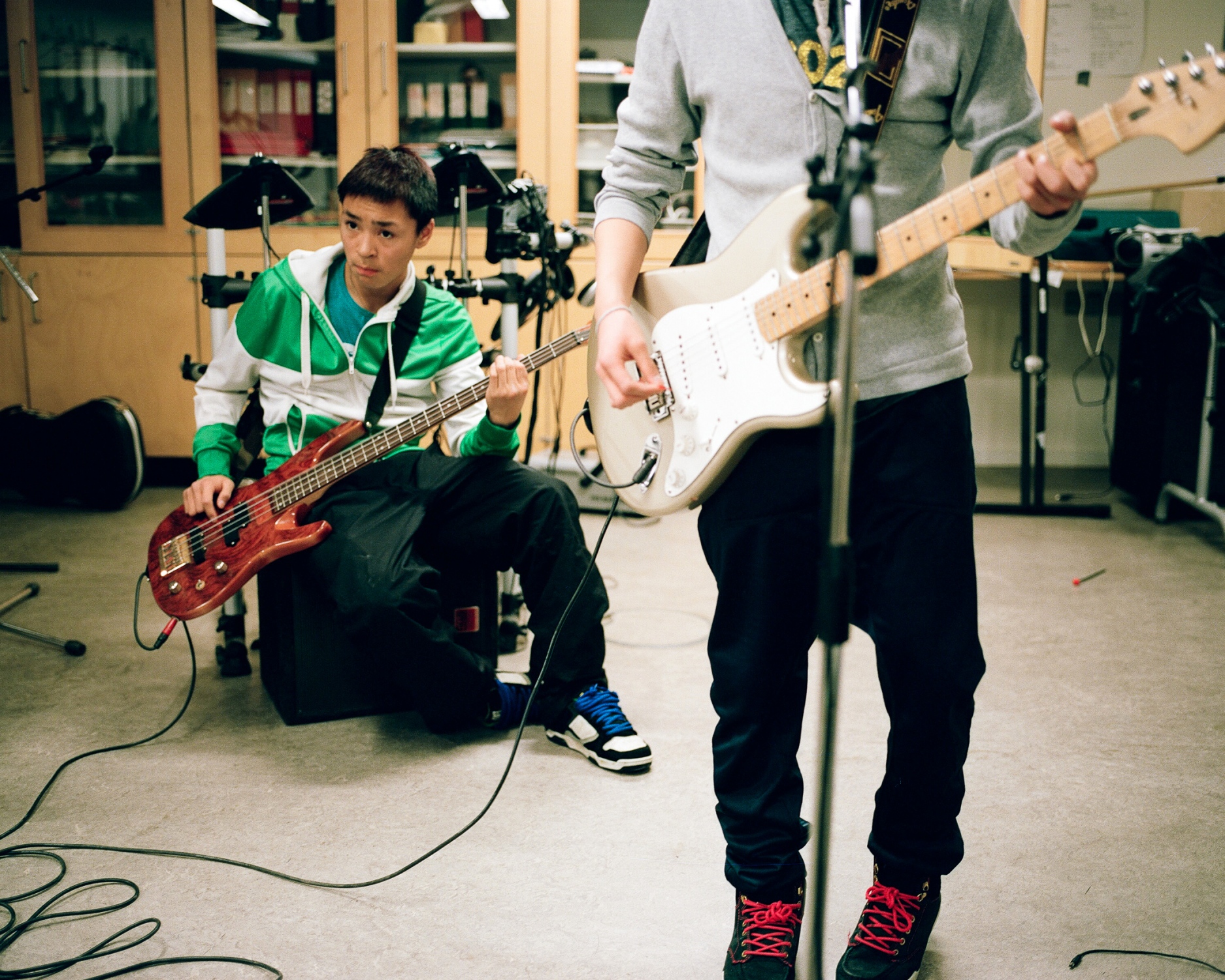 Two musicians of MIOL (Music Is Our Life) band from Tasiilaq are practicing.

In Tasiilaq if one does not like to play music nor football, there is not much activity left for the youngsters said Kurt Rokholm Pedersen a social worker.

Tasiilaq is one of the most remote village in Greenland and has a dramatic suicide rate among youngsters. 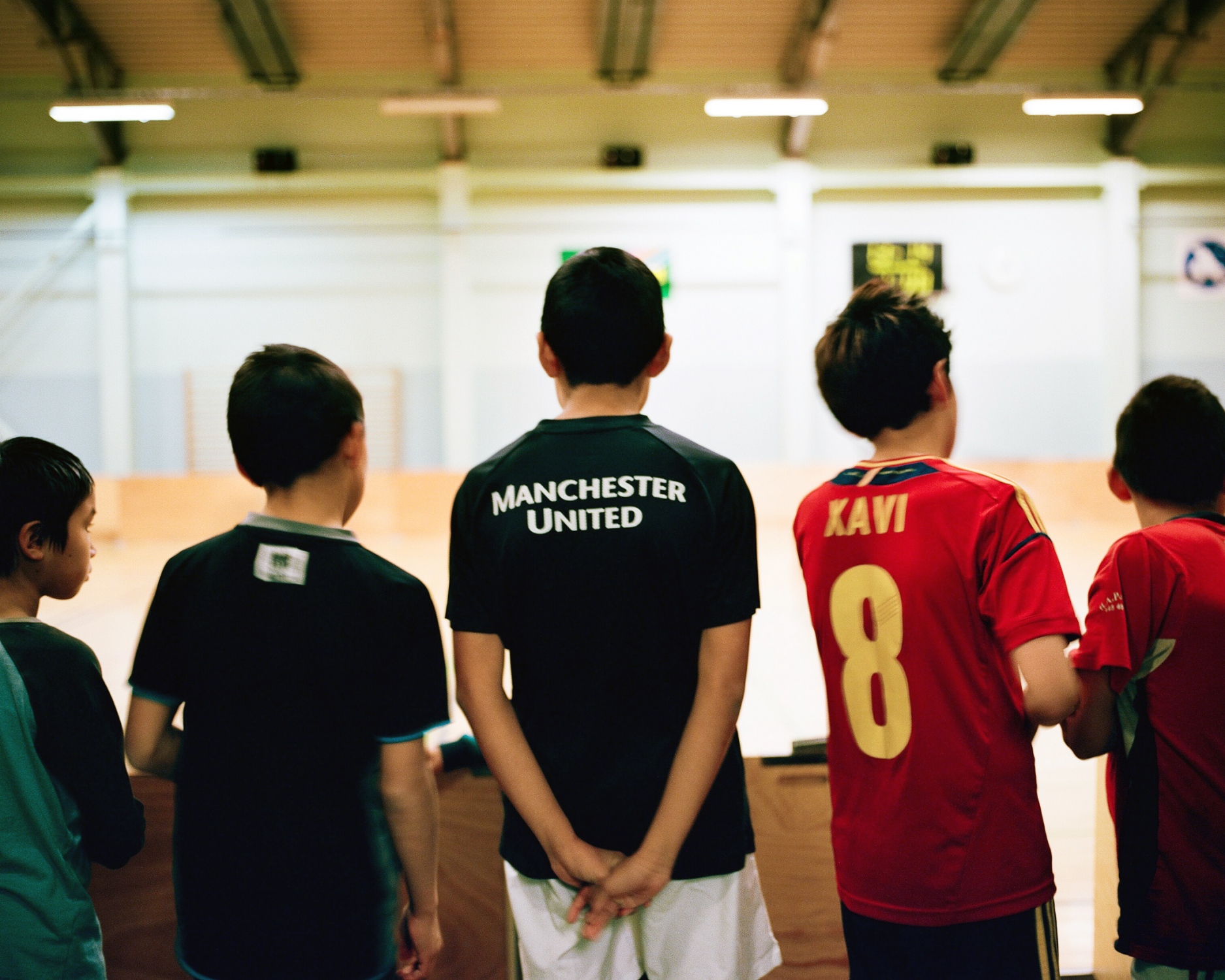 At the indoor sport hall of Tasiilaq.

In the settlement, if one does not like to play music nor football, there is not much activity left for the youngsters said Kurt Rokholm Pedersen a social worker.

Tasiilaq is one of the most remote village in Greenland and has a high suicide rate among youngsters. 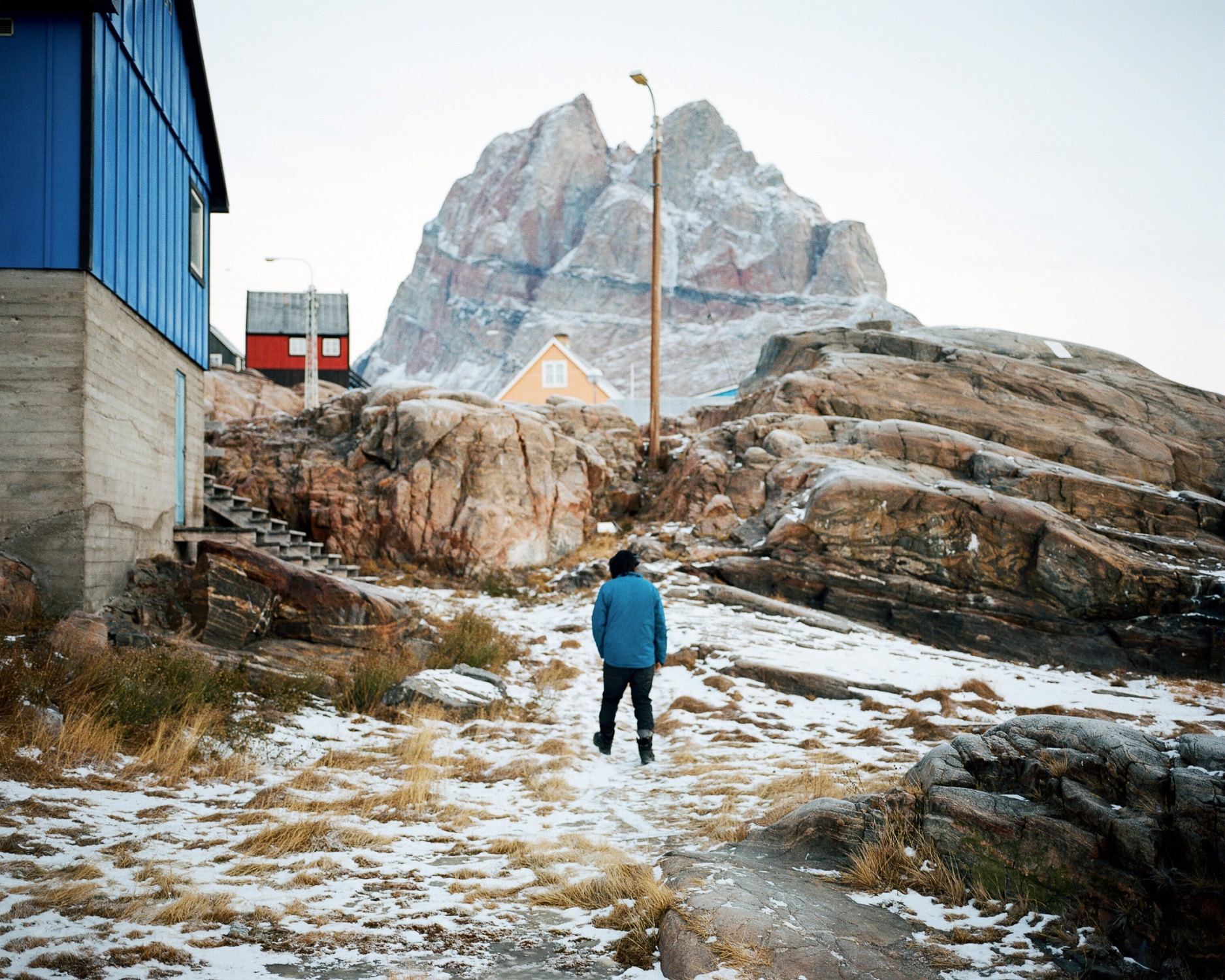 Malik is living with his grand mother in Uummannaq. He doesn’t have a regular work. He plays music and desire of leaving his village as he is not interested in becoming a hunter or fisherman. As many youngsters, and as a way to escape boredom, Malik started to drink at an early age.

In Greenland the rate of suicide is high and especially among youngsters. Even if the causes are multiple, alcohol abuse is often pointed as accelerating the fatal process. 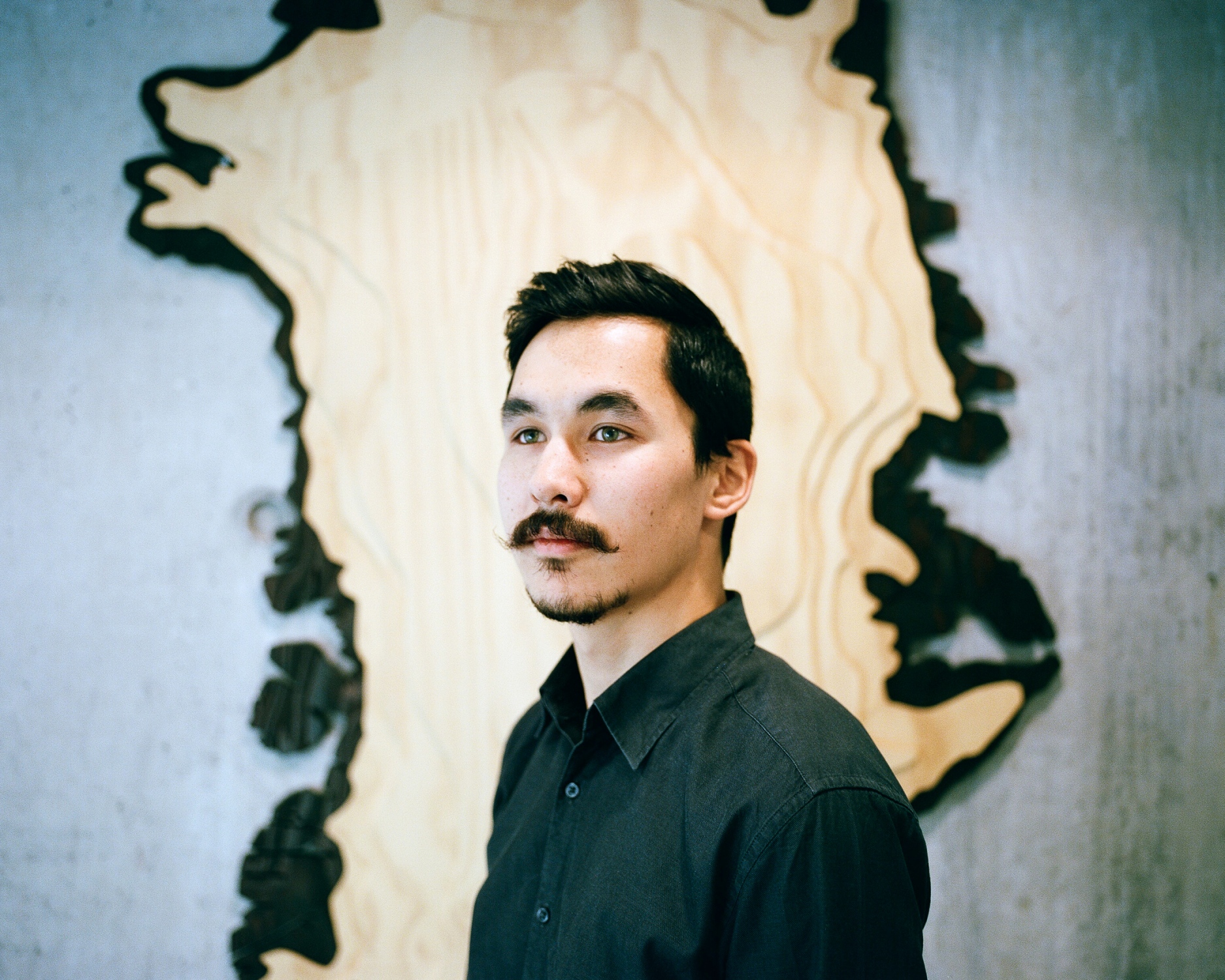 Inunnguaq Petrusen is student and teacher in political science at Nuuk university (Ilisimatusarfik). Inunnguaq is also a radio speaker at the KNR radio and musician.

Innunguaq defines himself as an Inuit proud of its roots. He wish to see Greenland becoming independent within the coming years but he tempers his thoughts arguing that the island shall first know itself better and resolve its social issues. 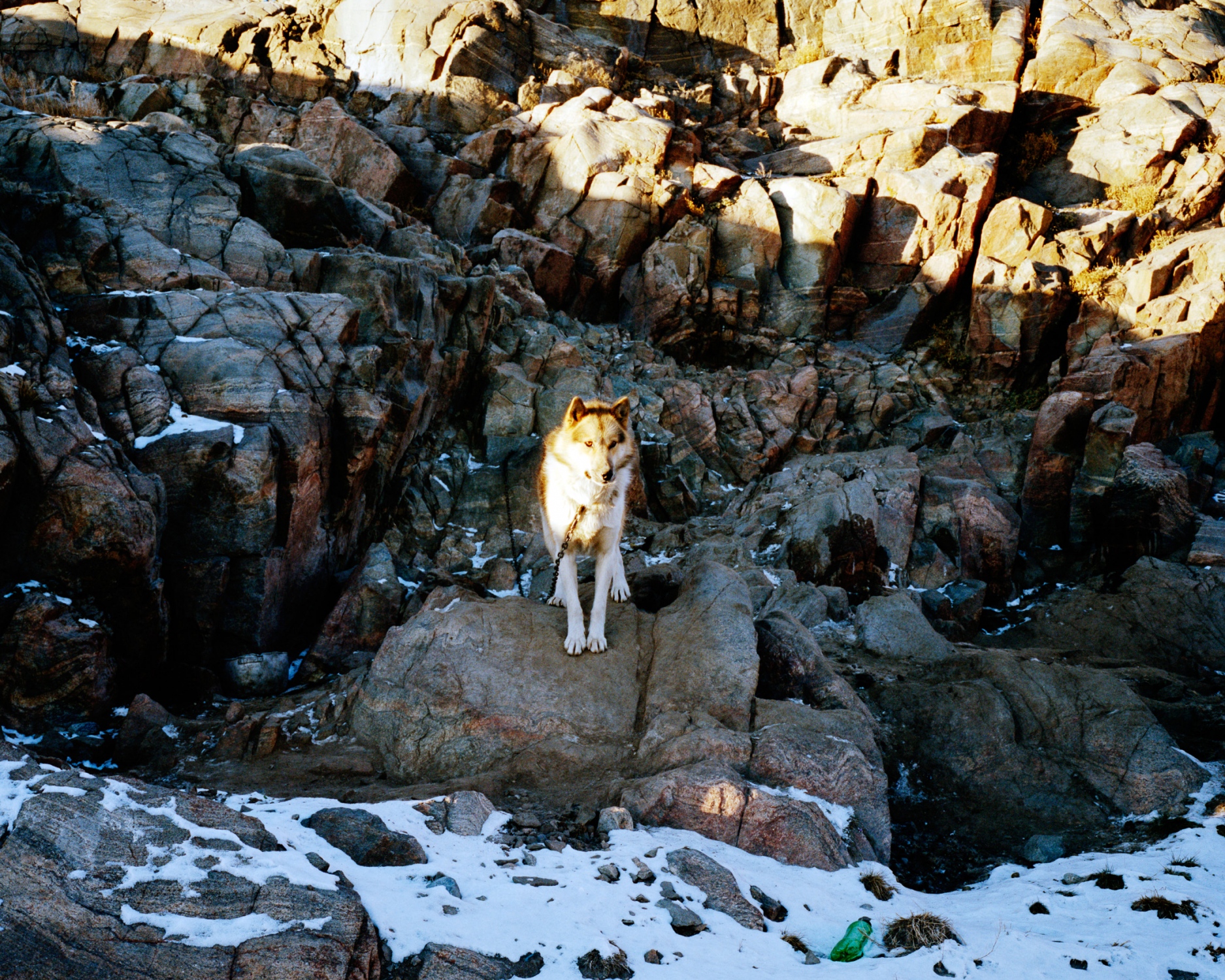 A sled dog in Uummannaq a village populated by hunters and fishermen. Dogs stay attached outside when they do not have to pull the sled. Sled dogs are no pets and should remain outside and respect their masters. 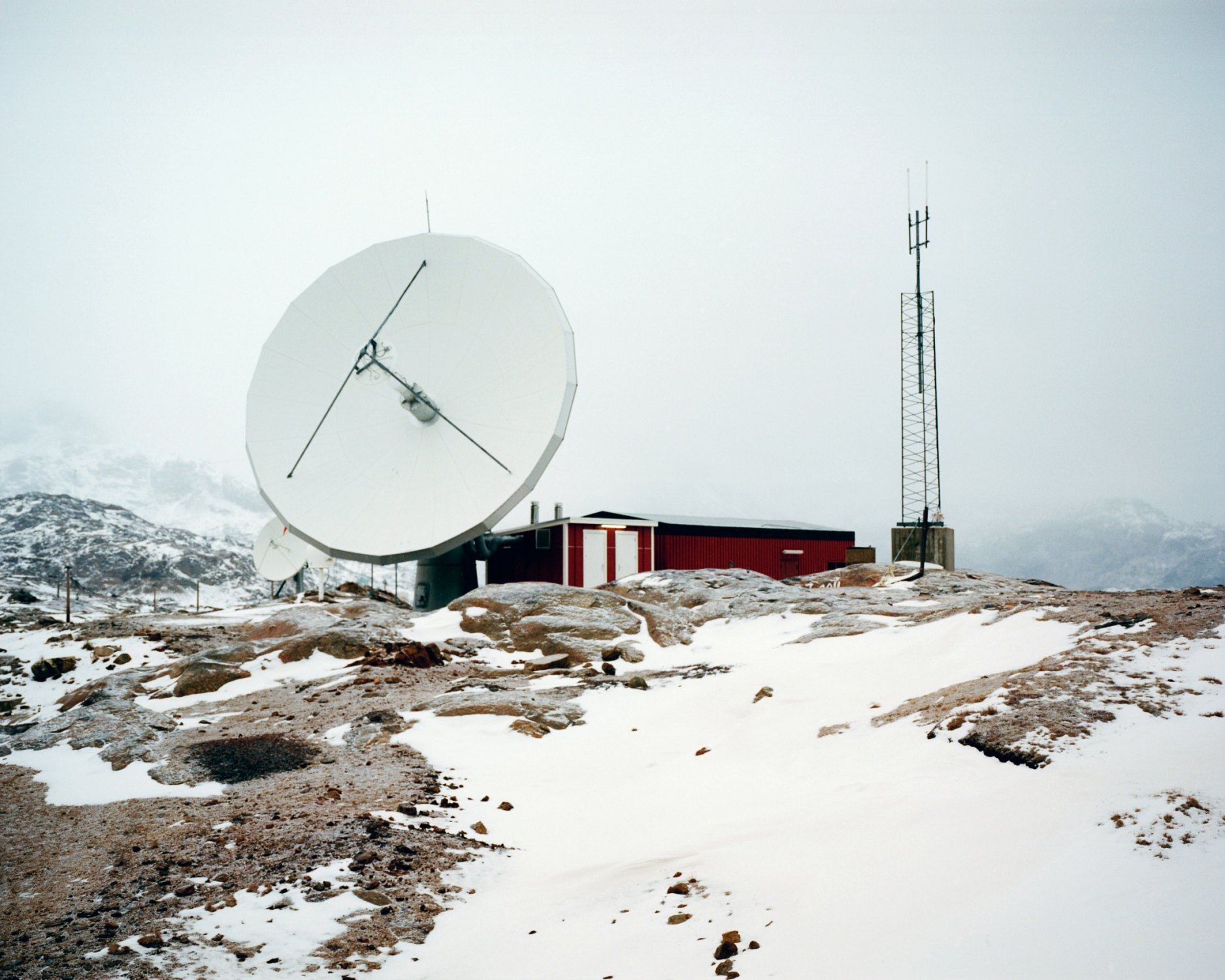 The telecommunication centre in Tasiilaq connecting the village to the phone internet and television network. 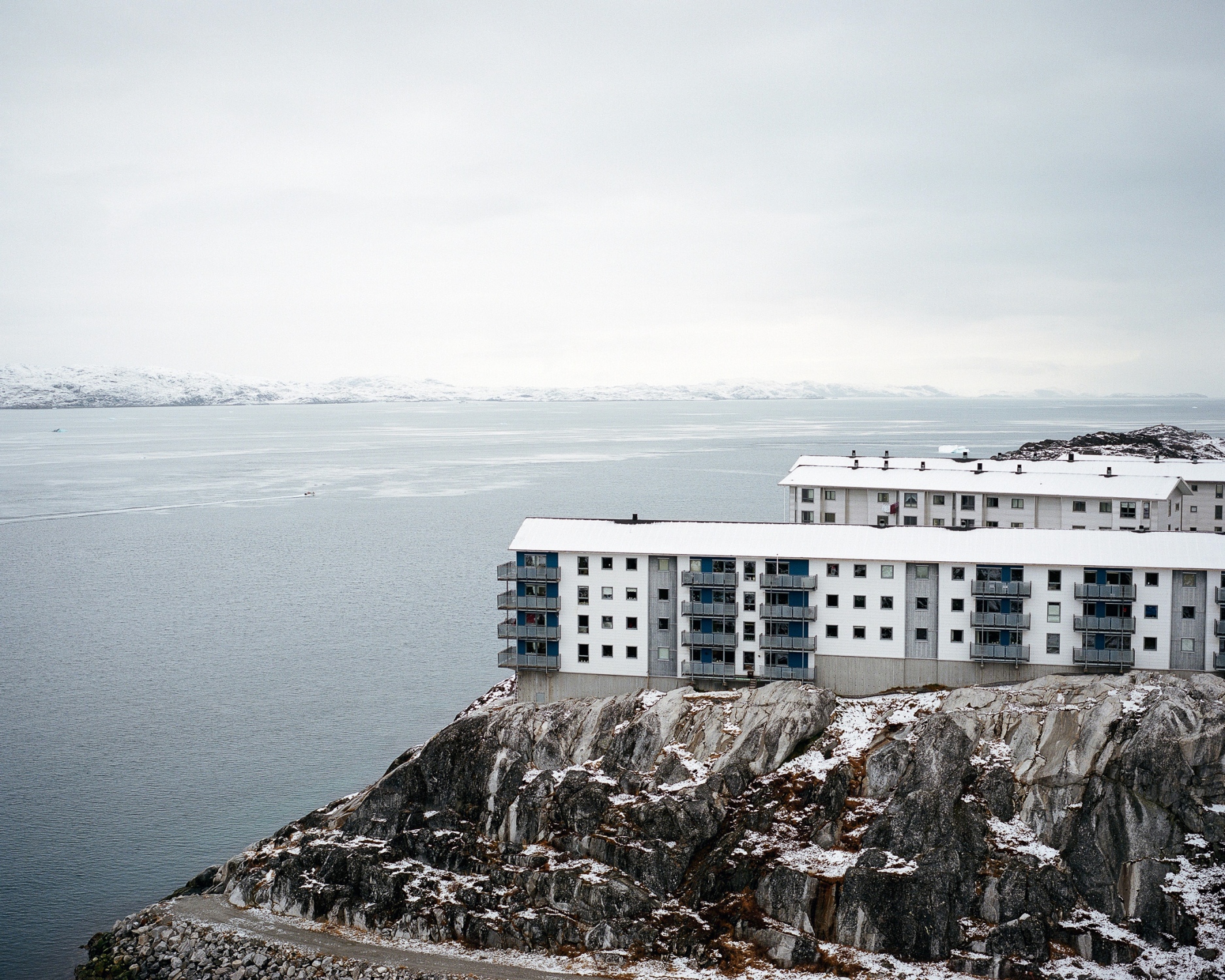 Residential building in the Greenlandic capital, Nuuk. Nuuk is the administrative center of Greenland and is inhabited by 15.000 people.

Nuuk has got over the recent decades a fast growth of its population. During the seventies many Greenlandic settlements were shut down and their inhabitants forced to move to Nuuk but as this concentration policy caused many social issues, it has been stopped in the nineties. Despite the population growth continue by over a third since 1990, and rose by almost 21% since 2000. In addition to those born in Greenland, data from 2015 indicates that 3,636 were born outside the country: mostly an imported qualified workforce that is not available in the island. 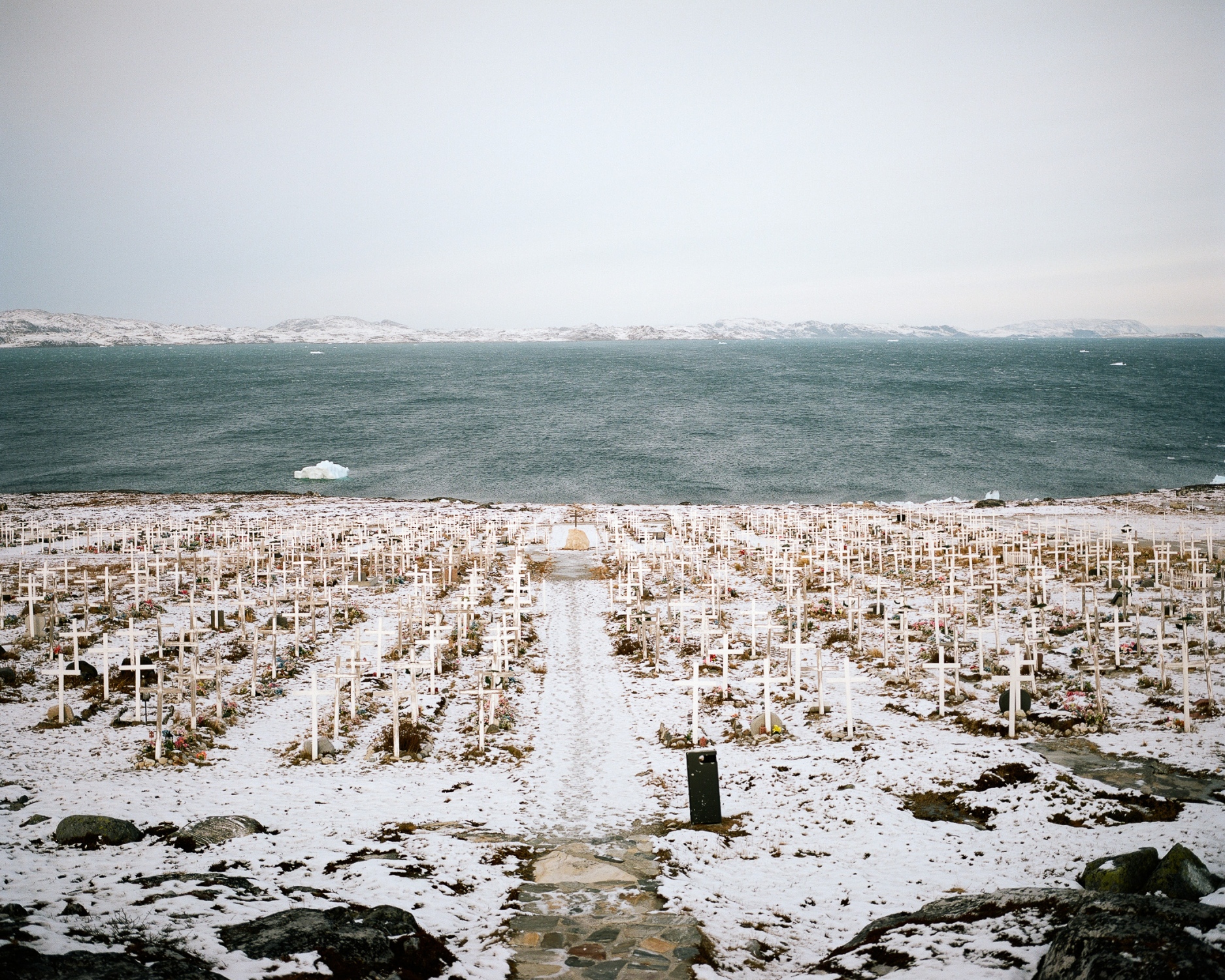 Nuuk, the capital city and most populated city of Greenland (16 454 habitants) is the administrative centre of the island with all institutions and administrative buildings.